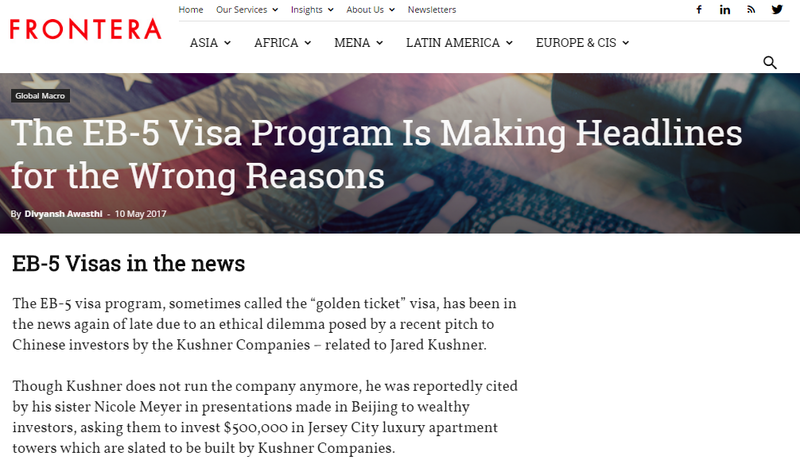 EB-5 Visas in the news

The EB-5 visa program, sometimes called the “golden ticket” visa, has been in the news again of late due to an ethical dilemma posed by a recent pitch to Chinese investors by the Kushner Companies – related to Jared Kushner.

Though Kushner does not run the company anymore, he was reportedly cited by his sister Nicole Meyer in presentations made in Beijing to wealthy investors, asking them to invest $500,000 in Jersey City luxury apartment towers which are slated to be built by Kushner Companies.

Media outlets alleged misuse of power by Kushner, who is not only the son-in-law of Donald Trump but also works as an advisor to the US President. This led Kushner Companies to issue a formal apology on Monday, May 8th.

How does the EB-5 visa program work?

The EB-5 visa program, initiated in 1990, is administered by US Citizenship and Immigration Services. The program allows entrepreneurs, their spouses, and unmarried children under 21 to apply for permanent residence in the US. It is known as EB-5 due to the employment-based fifth preference visa that participants receive.

To participate in the program, individuals need to invest a minimum of $1 million (or $500,000 in a rural area or a Targeted Employment Area) which creates or preserves 10 permanent full-time jobs for US workers.

A Targeted Employment Area is one with unemployment of at least 150% of the national average rate. Meanwhile, a rural area is defined as a region not within either a metropolitan statistical area or the outer boundary of any city or town having a population of 20,000 or more.

Criticism of the program

The EB-5 visa program has been criticized on claims that it does not meet its stated objective of creating jobs in the US, especially in rural areas or in regions of high unemployment.

Politicians from the two major political parties in the US want an overhaul of the program as they hold that it it being used as a regulatory loophole, with the proceeds of the program going to high-end luxury real estate projects rather than the aforementioned places.

Furthermore, the program is also believed to attract illicit money against which there are no foolproof protections. The New York Times reported one instance in which a potential investor seemingly had ties to brothels in China.

In the instance outlined at the beginning of the article, though Kushner has not been directly accused of influencing potential investors, the fact that his name is being used for pitching projects to them is believed to be a conflict of interest. Similar problems have also come up in previous US administrations where high ranking government officials have been related to individuals with commercial interests, placing them in a difficult spot.

In the next article, let’s investigate which countries rank the highest in terms of number of visas issued under the EB-5 program.