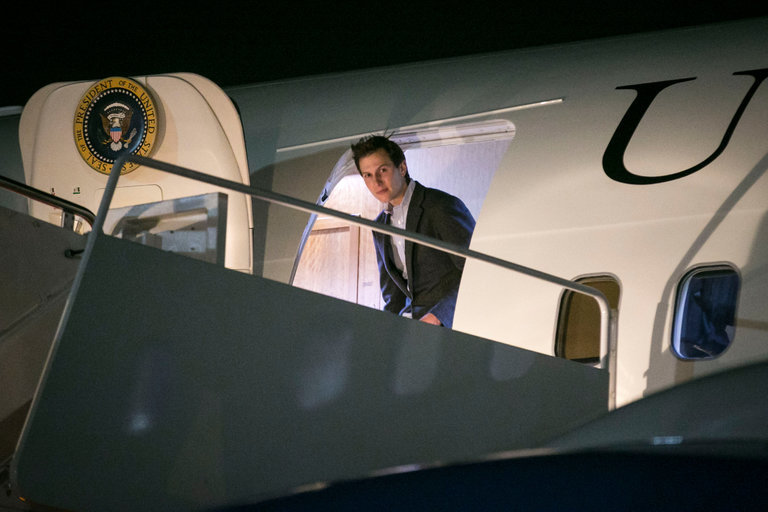 Jared Kushner, the president’s son-in-law, was cited by his sister at a business presentation in China over the weekend. CreditAl Drago/The New York Times

It was the first major piece of legislation that President Trump signed into law, and buried on Page 734 was one sentence that brought a potential benefit to the president’s extended family: renewal of a program offering permanent residence in the United States to affluent foreigners investing money in real estate projects here.

Just hours after the appropriations measure was signed on Friday, the company run until January by Mr. Trump’s son-in-law and top adviser, Jared Kushner, was urging wealthy Chinese in Beijing to consider investing $500,000 each in a pair of Jersey City luxury apartment towers the family-owned Kushner Companies plans to build. Mr. Kushner was even cited at a marketing presentation by his sister Nicole Meyer, who was on her way to China even before the bill was signed. The project “means a lot to me and my entire family,” she told the prospective investors.

The sequence of events offers one of the most explicit examples to date of the peril of the Trump and Kushner families maintaining close ties to their business interests and creates an impression they stand to profit off Mr. Trump’s presence in the White House. It also illustrates the problems of the so-called EB-5 visa program that prominent Republican and Democratic members of Congress want changed.

“It is just one more dilemma that a family with vast commercial interest has when relatives are in the federal government, particularly the White House,” said Michael H. Cardozo, who served as a deputy White House counsel in the Carter administration, which struggled with its own controversies related to the president’s brother, Billy Carter, and his work on behalf of an American company seeking to get into the oil industry in Libya. “The actions of relatives can come back and bite those serving those in the government.”

Bipartisan critics in Washington say they want to revamp the visa program because it is often abused. It supports high-end luxury projects, like the Kushner family deal, instead of promoting job creation in rural America or distressed urban areas, as it was intended. It has also been criticized by federal regulators for insufficient safeguards against illicit money coming into the United States; in the case of one applicant, they found potential financial ties to a string of Chinese brothels.

There is no assertion that Mr. Kushner broke any conflict-of-interest rule; but the law does not prevent his relatives from attempting to exploit those ties to benefit the family business.

Mr. Kushner’s portfolio includes a central role on China policy. That role has heightened the Kushner family name in a nation accounting for more than 80 percent of the EB-5 visas issued. Wealthy Chinese see the program as an easy way to legally move to the United States.

In fact, Kushner Companies — when Mr. Kushner was still at the helm — had received $50 million in EB-5 financing for a separate New Jersey project, a Trump-branded luxury high-rise tower in Jersey City that opened late last year.

On Monday, Senator Dianne Feinstein, Democrat of California, called the visa program “a stark conflict of interest for the Trump White House.” Meanwhile, the ethics watchdog group Democracy 21 called for Mr. Kushner to recuse himself from all policy dealing with China. The group had previously called for Mr. Kushner to make public a full list of his family firm’s overseas business partners and lenders as well as a full divestiture of his business assets into a blind trust.

After a surge in attention to the topic over the weekend, a spokesman for Mr. Trump said on Monday that the president also endorses changes to the visa program, including perhaps increasing the price foreigners must pay to get the special immigration status. A White House statement said the administration “is evaluating wholesale reform of the EB-5 program to ensure that the program is used as intended and that investment is being spread to all areas of the country.”

The statement also said that Mr. Kushner, who is married to Ivanka Trump, has recused himself from EB-5 related matters: “Jared takes the ethics rules very seriously and would never compromise himself or the administration.” In a statement from Kushner Companies, Mr. Kushner’s sister said it was not her intent to mention her brother as a way to lure investors.

Other family members of presidents have created stirs in past decades — including Neil M. Bush, President George Bush’s son — as they have engaged in outside business ventures that intersected with the federal government. Hillary Clinton’s brother Anthony Rodham was once cited for inappropriate appeals to government officials about a grant through this very same visa program.

But the matters involving Mr. Kushner, the White House and Kushner Companies are different. None of those previous presidential relatives took jobs in the White House while simultaneously benefiting from a multibillion-dollar business with international partners, who also stand to benefit from federal programs.

Although Mr. Kushner has shed stakes in some of the company’s investments, he has retained most of his interest, as the main beneficiary of a series of trusts invested in the firm’s various projects. His stake, along with some other investments, is worth as much as $600 million, and possibly much more, according to a government ethics disclosure form made public by Mr. Kushner in March. But Kushner Companies has declined to make public a list of its partners.

The firm has received investments or loans from around the world, including Goldman Sachs, the Blackstone Group, Deutsche Bank and Israel’s Bank Hapoalim, the subject of a United States Justice Department tax investigation. Last month, The New York Times reported that the Kushners had partnered with at least one member of Israel’s wealthy Steinmetz family. The family’s most well-known member, Beny Steinmetz, is the subject of a Justice Department investigation into alleged bribes.

And in March, Mr. Kushner’s firm said it ended talks with Anbang Insurance Group, a Chinese company with ties to ruling members of the country’s Communist Party. Those talks began around the time President Trump secured the Republican nomination and also raised questions because of the potentially favorable terms for Kushner Companies.

When it was created in 1990, the EB-5 visa program was intended to provide a new source of financing for projects in underserved areas, defined as places with high unemployment. But there are no federal standards for defining such neighborhoods. And developers often provide gerrymandered maps to qualify under the program.

The Kushner project in Jersey City “is a textbook example of the abuses we have seen in the last six or seven years,” said Shae Armstrong, a Dallas lawyer who has joined with members of Congress, including Senators Charles E. Grassley, Republican of Iowa, and Ms. Feinstein, to call for changes in the program.

That part of Jersey City, less than three miles from Manhattan, is hardly an economically depressed area, and a luxury apartment building is going to create few permanent jobs. “And it is why other towns in rural America are not getting EB-5 money,” Mr. Armstrong said.

Indeed, in the Beijing presentation delivered by Mr. Kushner’s sister, the firm cited the high household income of the majority of the residents — between $100,000 and $200,000 — in the Trump-branded building that has already received EB-5 financing.

The $1 billion Kushner project at the center of the current controversy is a set of high-rise towers — including 1,730 apartments and 89,000 square feet of retail space. The company is seeking $150 million through the EB-5 program.

Traditional lenders can charge interest of 12 to 18 percent, said Gary Friedland, a professor at New York University who has written extensively about the program. But EB-5 loans can wind up costing developers as little as 4 percent, he said.

“The immigrant investor’s primary purpose is to secure a visa, so they accept minimal interest, as low as half a percent,” Mr. Friedland said.

For developers, said Steve Yale-Loehr, an immigration law professor at Cornell University, the appeal of EB-5 can be summed up in two words: “Cheap money.”