Don't kill the 'golden visa'—expand it 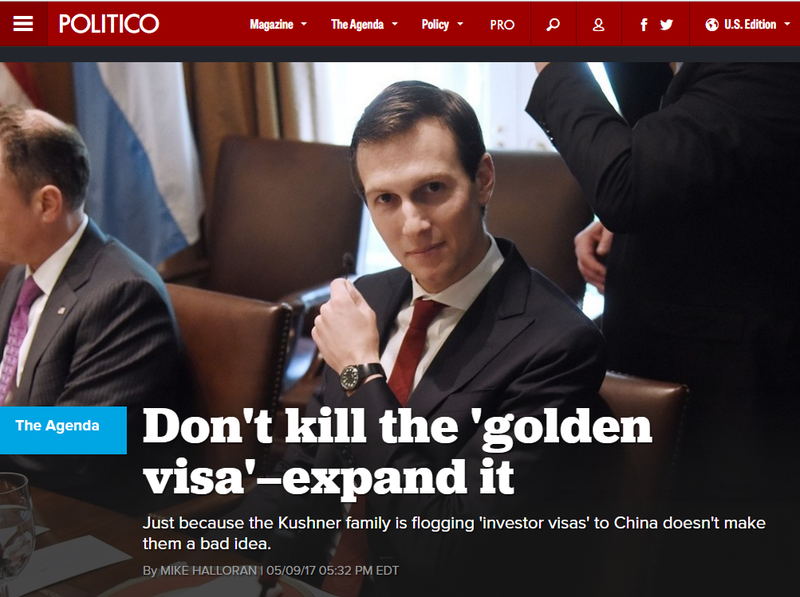 It’s sometimes called the “golden visa,” the obscure immigration program for big investors that burst into the headlines this week in the wake of stories on the family of White House aide Jared Kushner. Last Saturday, Nicole Meyer — Kushner’s sister and a representative of her family’s development company—hosted a meeting for Chinese investors at the Beijing Ritz-Carlton, walking them through how investing enough money in Kushner family properties can open the door to immigration to America.

In addition to raising ethical questions and forcing the Kushner family to apologize for appearing to pitch their White House connections, the meeting case a spotlight on the visa she was talking about: The EB-5 visa, which allows foreigners to invest $500,000 to $1 million in the U.S. in exchange for a visa which in turn can lead to what amounts to a green card.

Critics quickly sharpened their knives for the visa program, saying it gives the wealthy a leg up on moving to the U.S. But for all the uproar over the Kushner family, Washington shouldn’t overreact. The EB-5 program has been a huge success for all involved. Investors have received a coveted U.S. visa, workers have received jobs and companies have found cheap financing. It’s a win-win-win.

The headlines play into skepticism that was already mounting in D.C. Last week Congress, extended the EB-5 program until the end of September but its future remains uncertain. Like almost all government programs, EB-5 isn’t perfect. Investments in the U.S. don’t always turn into jobs for American workers; Chinese investors have been known to use the program to simply get their money out of China. These are real problems. But it would be a mistake for Congress to respond to them by ending EB-5 altogether, as critics have suggested. Instead, the program’s 26-year history suggests there are more benefits we aren’t reaping—and that if lawmakers want to improve the program, a better way would be to expand the annual limit on visas tenfold while imposing greater oversight.

EB-5 was created in 1990 to mimic the job-boosting success of similar programs in other countries like the United Kingdom, Austria and Australia. The investor visa program creates a path to residency for foreign nationals who invest $500,000 to $1 million in U.S. projects that generate at least 10 permanent jobs. The lower $500,000 requirement is for investments in rural projects, or economically depressed areas; otherwise, the required amount is $1 million. Typically, EB-5 investors have backed development of ports, hotels and other commercial properties. The program created 174,000 jobs and generated $5.4 billion in investments in 2012 and 2013, according to the Department of Commerce.

But for all its success, EB-5 has garnered harsh pushback among some in Congress. Rural lawmakers correctly point out that most of the projects funded by EB-5 have been in flourishing metropolitan areas; nearly half of all EB-5 investors have invested in new commercial enterprises in California and New York. Some have complained the money really supports wealthy developers and not enough is turned into jobs.

These are real problems, but lawmakers shouldn’t respond by eliminating the program. Underlying the visa is a big principle that still holds up: There’s lots of foreign capital that could flow to the U.S., and visas are attractive incentives that don’t cost taxpayers. This may strike people as wrong; aren’t wealthy foreigners jumping the immigration line? But these are immigrants willing to put skin in the American game and make a real down payment on their contribution to the U.S. economy. Those 174,000 jobs the Department of Commerce said came from EB-5 represented 4.3 percent of U.S. job growth during that time – they moved the needle. And EB-5 proved its value during the financial crisis when it was one of the last capital lifelines remaining for parts of the economy.

Congress needs to fix EB-5 and unleash its potential for creating jobs and drawing investment into rural and urban areas. Here are three ways to improve the program.

First, root out fraud. Principally this has been developers defrauding the immigrant investors. To do so, Congress should require developers receiving funding to provide increased investor security. That means financial audits and standard reporting on projects, streamlined project tracking and investor transparency, a complete audit trail of capital movement and requiring third-party fund administration and validation of capital draw requests. Integrity is a top priority for Congress and the industry can embrace it.

Second, expand the entire program. Lawmakers could increase the number of EB-5 visas granted each year from 10,000 to 100,000. Anti-immigrant groups may faint at the idea, but it is difficult to argue this isn’t merit-based immigration. At the investment amounts Congress is considering, such an increase could bring $100 billion in foreign direct investment into the country. Using Department of Commerce data as a starting point, that could project to 1.6 million jobs a year if fully subscribed. If steered properly this volume of investment would also lift rural development and appease critics like Sens. Charles Grassley and Patrick Leahy. In fact, lawmakers could use the expanded EB-5 program to direct as much as $1 trillion to infrastructure projects — a top priority of the Trump administration.

Third, speed up processing time — and make money doing it. Congress should raise the fees that investors pay the U.S. Citizenship and Immigration Services (USCIS), which oversees the program, in order to improve processing efficiency and reduce lengthy backlogs. A portion of these fees could also be dedicated to educating governors and mayors throughout the country on how to leverage EB-5 capital in public private partnerships. That would bring investments into the U.S. faster and help direct those funds towards infrastructure projects throughout the country.

Even before the Kushner controversy cast a shadow on EB-5, the program was already in trouble. Lawmakers extended it in last week’s spending bill, but only until September 30. With negotiations deadlocked, and a fair amount of accumulated distrust in the air, USCIS is poised to implement proposed regulations that would raise the minimum investment to $1.3 million, updating the thresholds for inflation. That may seem reasonable but such a sudden hike would effectively halt new application activity — and the significant investment and job creation that comes with it. If that happens, it would halt a program that has been a powerful engine of job creation, economic growth, productive immigration and infrastructure investment.

The Kushner family may continue to reel from the weekend’s misadventures. But used as intended — to spur investment and job creation in the U.S.—the EB-5 program is worth cheers, not jeers, in Washington. Congress should fix its real problems and expand it, leveraging a powerful tool of job creation to benefit more than a million Americans and using the continuing global appeal of America to bring in capital from whoever wants to invest it.

The writer's conclusion, "That may seem reasonable but such a sudden hike would effectively halt new application activity" is unfounded. China's restrictions on getting cash out of the country is a greater concern than the increase in minimum investment. In a country with 1.4 billion people, there are plenty of prospective immigrants with the desire and capacity to make larger minimum investment for the chance to reside in the U.S.

Presuming the EB-5 project is successful, the EB-5 investor receives a return of their investment capital anyway, making the net cost of a U.S. green card immaterial. Notwithstanding the current practice of Chinese EB-5 investors hobbling together ten $50,000 transfers from friends and family in China to aggregate $500,000, that may require instead 26+ wire transfers to aggregate $1,300,000, the higher amount may raise the average education and skill levels of EB-5 immigrants and their long term contribution to the U.S. economy.

At a recent IIUSA conference, Chinese agents stated their clients are not concerned about the proposed EB-5 investment increase. What concerns investors is the length of time money is tied-up and the multi-year backlog of EB-5 visa processing by the USCIS.