What You Need to Know About EB-5 Visas 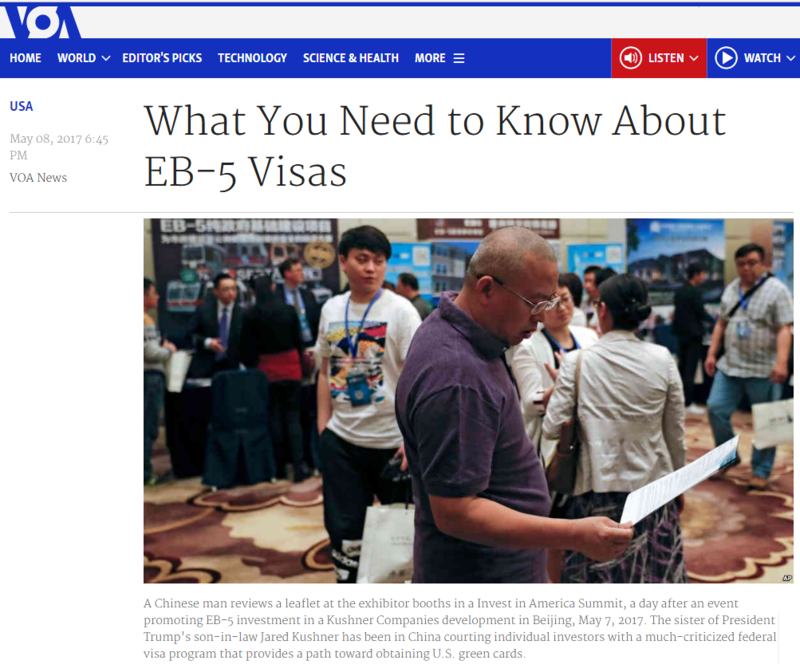 The EB-5 program allows entrepreneurs and their families to apply for green cards (permanent residence) if they 1) make the necessary investment in a commercial enterprise in the United States, and 2) plan to create or preserve 10 permanent full-time jobs for qualified U.S. workers.

How much is the necessary investment?

$1 million or $500,000 if the money is invested in a high unemployment or rural area, considered a targeted employment area (TEA). The Department of Homeland Security (DHS) says approximately 97 percent of all investments by EB-5 petitioners are made in TEAs at the reduced amount of $500,000.

DHS proposed in January increasing the minimum investment amount required for the EB-5 program from $500,000 to $1.35 million for projects in TEAs; from $1 million to $1.8 million for developments in low-to-average unemployment areas.

What is purpose of program?

Congress created the EB-5 Program in 1990 to stimulate the U.S. economy through job creation and capital investment by foreign investors. Under a program initially enacted as a pilot in 1992, and regularly reauthorized since then, investors also may qualify for EB-5 classification by investing through regional centers designated by U.S. Citizenship and Immigration Services (USCIS).

What are regional centers?

Regional Centers are federally approved third parties that "connect foreign investors with developers in need of funding, and take a commission." Regional centers are usually private, for-profit businesses that are approved by the USCIS.

What kinds of businesses can I invest in?

EB-5 investors must invest in a “for profit activity formed for the ongoing conduct of lawful business,” which was established after Nov. 29, 1990. If the enterprise was established before that date, it must have been restructured and expanded.

How many EB-5s are available every year?

There is a cap of about 10,000 annually. However, many EB-5 visa holders bring family members with them, and they are included in the count. So, the actual number of visas issued is much lower than that. Before the 2008 recession, DHS says the EB-5 program received fewer than an average 600 EB-5 petitions per year.

Since then, the program has received an average of more than 5,500 petitions per year. Between FY 2014 and FY 2015 alone, more than 25,000 petitions were received. As a result, demand for EB-5 visas by investors has now outpaced the annual supply, resulting in visa backlogs.

What is the future of the EB-5 program?

The EB-5 visa program has just been extended in its current form through September. What happens after that will depend on a review being conducted by the Trump administration and Congress. White House spokesman Sean Spicer says the administration is looking “over the entire visa program, all the various visa programs, and whether or not they are serving the purpose they intended to, whether or not we're making sure we're doing what's in the best interests of the American worker.”

Both parties in Congress have expressed an interest in revising the program.