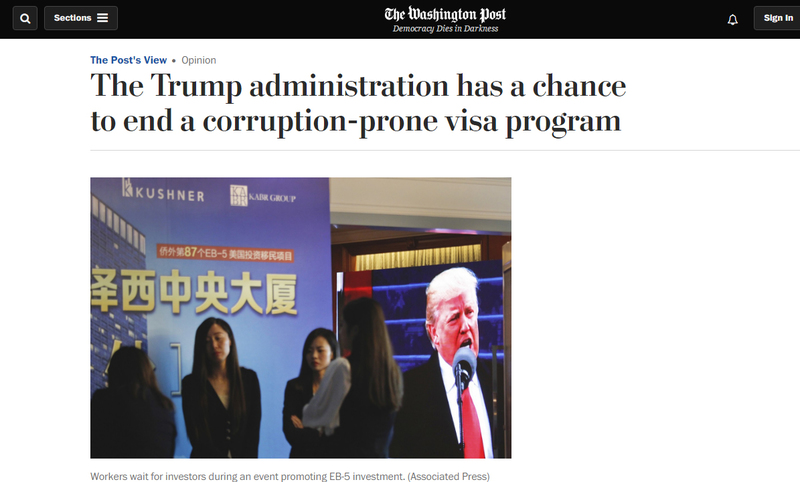 Workers wait for investors during an event promoting EB-5 investment.

THE FIRST thing to be said about the weekend’s visa-peddling conference by the Kushner Companies in China is: The administration should take it as an opportunity for a forthright policy stance.

Jared Kushner, President Trump’s son-in-law and a chief White House adviser, has no stake in the project promoted over the weekend and has recused himself from the family business. The company, which included mention of Mr. Kushner and a large photo of his father-in-law at the event, has apologized for any impression of influence trading that might have been created by its presentation. The firm has long raised money for its real estate ventures from the EB-5 program, which awards legal residency in the United States to foreign investors.

Three months ago, we urged Mr. Trump to join the movement against this program; in the meantime, it has been reauthorized in the omnibus appropriations bill that Mr. Trump just signed — though, in fairness, he affixed his signature not to save the visa program but to keep the government open. With the clock ticking until the program’s new expiration date, Sept. 30, the president has a chance to get behind efforts to end the hopelessly inefficient and corruption-prone EB-5 program before it causes more embarrassment.

For a man who made it into the Oval Office on a promise to close the immigration door to low-priority entrants, and to reduce immigration-related threats to national security, ending EB-5 should be a no-brainer. It began a quarter-century ago as a well-intentioned plan to attract international capital to the United States by awarding permanent residency to 10,000 foreigners per year who agreed to invest at least $500,000 into a U.S. business, creating at least 10 jobs directly or indirectly. In September 2015, the Bipartisan Policy Center estimated that 44,000 people, a third of them foreign investors and the rest family members, had qualified since 1992. A disproportionate number of recent entrants come from China; their political and financial antecedents are difficult to vet, let alone to vet “extremely.” The yield has been 77,150 full-time jobs and approximately $4.2 billion in investment — trivial in relation to the giant U.S. economy. Lobbyists have manipulated the program’s rules so that it now favors big-city hotel, office and apartment developers, rather than depressed rural and urban zones as Congress originally intended. There has been a string of highly publicized scandals involving fraud.

Sens. Charles E. Grassley (R-Iowa) and Dianne Feinstein (D-Calif.) have a bill to end the EB-5 program once and for all. This is not a government visa-selling program. It is a government visa- giveaway program; the private-sector businesses, in effect, sell them, in return for low-cost financing of projects they would probably do anyway. Ending EB-5 would be an easy step on the path to rational immigration reform.