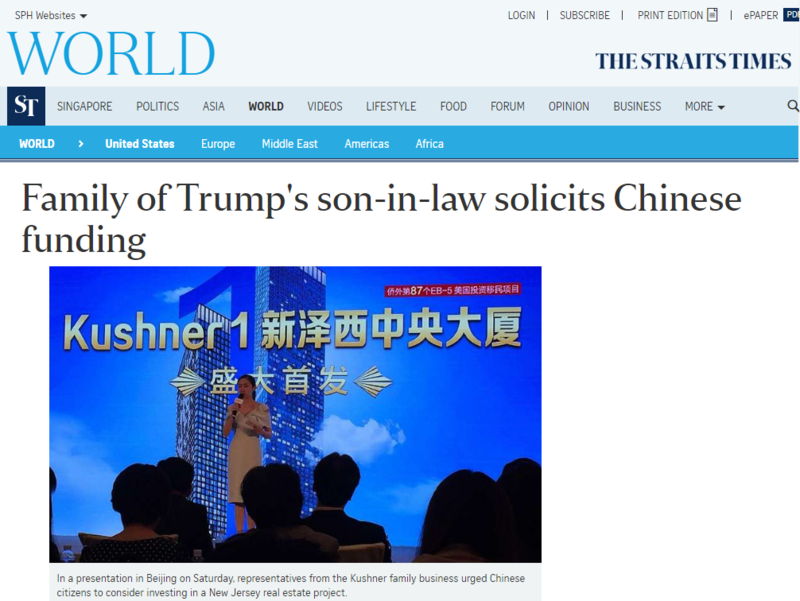 Mr Kushner's sister, Nicole Kushner Meyer, was in Beijing on Saturday seeking US$150 million (S$210 million) in investment in a luxury apartment-complex project in New Jersey, according to US media reports.

Mr Kushner, 36, President Donald Trump's son-in-law, has far-reaching influence over domestic and foreign policy. He stepped down from the family company in January to serve in the administration.

However, eyebrows have been raised as the Chinese investment sought by his family is to be funnelled through the US EB-5 visa programme.

The programme offers foreign nationals permanent residency - commonly known as a green card - in exchange for investments of at least half a million dollars in a US business that must also create 10 American jobs.

The New York Times reported that the family business' investment drive is also "highlighting their ties to Mr Kushner as they court investors".

Speaking before more than 100 investors at Beijing's Ritz-Carlton Hotel, Ms Kushner Meyer said the project "means a lot to me and my entire family", and mentioned her brother's former role as chief executive of Kushner Companies, the report added.

Kushner Companies was also due to pitch for investments in Shanghai yesterday and in the southern Chinese cities of Shenzhen and Guangzhou next weekend, according to the events' organiser QWOS, a Chinese government-approved immigration agency.

Organisers yesterday barred journalists from a publicity event in Shanghai for a two-tower luxury apartment complex in New Jersey.

The project is being developed by KABR Group and the Kushner Companies.

The developers are seeking to raise US$150 million, or 15.4 per cent of funding for the project, One Journal Square, from investors through the EB-5 visa programme, according to marketing materials posted by the event's organiser, immigration agency Qiaowai.

The EB-5 programme was created in 1990 to help stimulate the US economy through job creation and capital investment from foreign nationals, but detractors say it puts citizenship up for sale.

Nearly 90 per cent of EB-5 visas were issued to Chinese nationals in 2014, when the programme reached its quota of 10,000 visas.

Last week, federal agents in California raided two homes and a business allegedly connected to a US$50-million visa fraud scheme that benefited up to 100 Chinese nationals. The authorities said the key suspects in the case helped wealthy Chinese obtain US residency visas in exchange for bogus investments.