Realtors learn about types of visas for foreign nationals 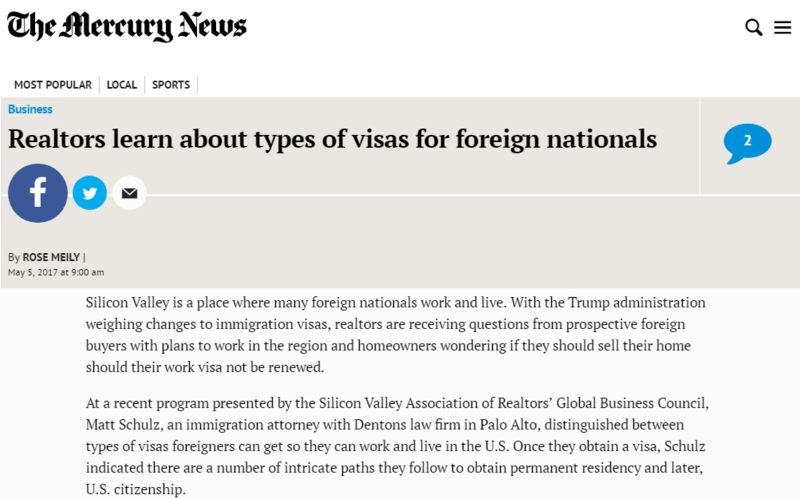 Silicon Valley is a place where many foreign nationals work and live. With the Trump administration weighing changes to immigration visas, realtors are receiving questions from prospective foreign buyers with plans to work in the region and homeowners wondering if they should sell their home should their work visa not be renewed.

At a recent program presented by the Silicon Valley Association of Realtors’ Global Business Council, Matt Schulz, an immigration attorney with Dentons law firm in Palo Alto, distinguished between types of visas foreigners can get so they can work and live in the U.S. Once they obtain a visa, Schulz indicated there are a number of intricate paths they follow to obtain permanent residency and later, U.S. citizenship.

According to Schulz, family-based sponsorship is a popular way to obtain an immigrant visa if a U.S. citizen wished to have his foreign spouse, parents or siblings live in the U.S. Length of the process depends on type of relationship and country of origin, as each country has annual limits on the number of visas granted.

Popular in Silicon Valley and commonly used by tech companies is the H-1B non-immigrant visa, which allows U.S. employers to temporarily employ foreign workers in specialty occupations. The visa is granted for up to three years, and can be renewed for another three years.

Despite talk about overhauling the H-1B visa system, Schulz said there should be no cause for worry. He said the executive order is largely symbolic and merely calls for a long-term review of the program to make sure firms are in compliance with its requirements.

“There may be changes in the way the visas are allocated, but no calls to limit their number or terminate the program,” said Schulz.

Another popular visa is EB-5, which is designed to attract foreign investment in projects that create jobs for U.S. citizens. It is also a quick path for rich foreign investors to obtain residency or even U.S. citizenship, said Schulz. Applicants must invest $500,000 to $1,000,000 in a new business approved by the US Citizenship and Immigration Services (USCIS) that will create at least 10 jobs over a speciﬁed time period. Upon approval, a foreign investor receives conditional U.S. residency. Permanent residency can be granted after two years if the employment objectives are fulﬁlled.

There are two types of EB-5 visas. The individual EB-5 requires direct investment in any for-proﬁt business that creates at least 10 full-time jobs for U.S. workers. The Immigrant Investor Program requires investment in commercial enterprises with USCIS-approved regional centers. The investor is usually a limited partner and is free to live anywhere in the U.S.

Schulz said China is the biggest source of EB-5 visa users, followed by Vietnam. Typically, the spouse of the foreign investor, often the wife, is the principal and lives in the U.S. with their children who attend school. The husband takes care of other business at home.

Schulz indicated the program is currently under review by Congress because of charges of abuse. Despite its controversy, Schulz is optimistic that the program will be renewed, perhaps with additional oversight.

“There have been many successful businesses and projects created by EB-5, like hotels and franchises, that have provided jobs for U.S. workers,” said Schulz.

Tess Crescini, chair of the realtor association’s Global Business Council, noted it is helpful for realtors to learn about the different types of visas. “This added knowledge helps us better serve our clients and refer them to experts who can advise them on steps to obtaining a visa, whether it is to work in the area or buy investment property,” said Crescini.