Welcome to Chinafornia: The Future of U.S.-China Relations 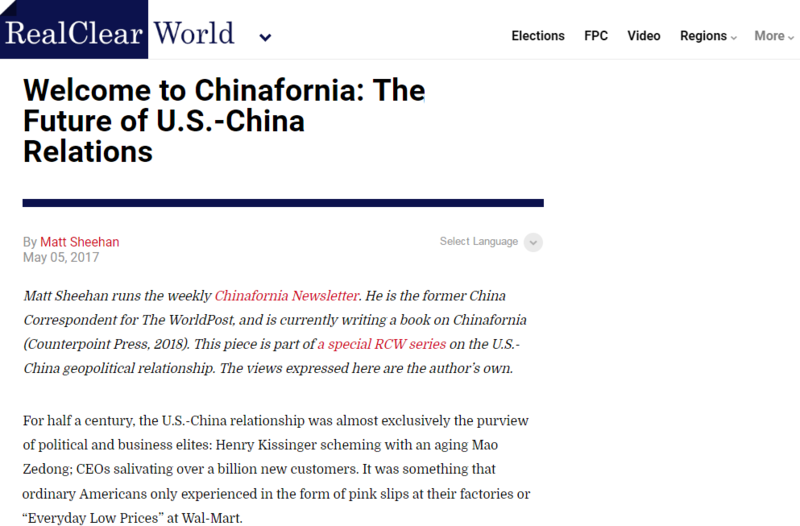 For half a century, the U.S.-China relationship was almost exclusively the purview of political and business elites: Henry Kissinger scheming with an aging Mao Zedong; CEOs salivating over a billion new customers. It was something that ordinary Americans only experienced in the form of pink slips at their factories or “Everyday Low Prices” at Wal-Mart.

But, in the last five years, all of that has changed. Chinese citizens, companies, and capital have arrived on U.S. soil in force, and they’re making their impact felt across small towns, college campuses, and corporate America.

The trend is national, but the epicenter is in California. As the top destination for Chinese investors, students, tourists, and homebuyers, California is the living laboratory for a new paradigm in U.S.-China relations. This new paradigm is built on grassroots ties and face-to-face interactions. I call it Chinafornia.

Chinafornia is the fluid ecosystem of entrepreneurs, students, investors, immigrants, and ideas bouncing back and forth between the Golden State and the Middle Kingdom. It’s the Chinese undergrads flooding onto California campuses and the Silicon Valley startups angling for a toehold in China. It’s the Chinese families buying up beachfront property in San Diego and the Los Angeles welders building Chinese-funded skyscrapers. It’s Chinese governors studying California carbon markets and California mayors courting Chinese manufacturing investment.

Chinafornia is where the rubber meets the road in an era of deep, multifaceted engagement between the world’s two superpowers. This engagement is bringing the U.S.-China story down from the realm of geopolitics and directly into the lives of ordinary Americans. It’s creating jobs, funding long-stagnant development projects, and giving a boost to cash-strapped public universities.

But it’s also creating new anxieties and frictions. Under normal conditions, a boom in investment is considered a win for local citizens. But when that money comes from far away investors -- especially from a country with a vastly different culture and an authoritarian government -- the influx creates thorny tradeoffs. Every benefit California derives from these interactions comes with a potential dark side, one that threatens to spark a nativist backlash against the new arrivals.

For a glimpse into how these trends are playing out in real time, let’s take a tour of Chinafornia on the ground.

Start in San Francisco’s Bayview-Hunters Point neighborhood, the poorest and last predominantly black part of the city. Chinese investors have poured hundreds of millions of dollars into transforming the neighborhood’s abandoned navy shipyard into the city’s largest new housing and retail development in decades.

The funding comes from the controversial EB-5 program, which grants green cards to foreign investors who create ten new jobs in America. More than $400 million from EB-5 investors -- 80 percent of them Chinese -- finally got the long-delayed Hunters Point project off the ground. Today, as the money pours in and the buildings go up, local Hunters Point residents look on with hope for new jobs -- and fear of being displaced by foreign-funded gentrification.

For Chinafornia’s impact on higher education, head down to the University of California, San Diego. Ten years ago there were 70 undergraduates from mainland China at the school. Last year that number had skyrocketed to 3,534. It’s a transformation that has been replicated across the UC system, with the number of Chinese students multiplying by a factor of 10 in the last decade. The reason for that boom? Voracious Chinese demand for U.S. higher education, paired with a dramatic decline in state funding for public universities.

International undergrads pay approximately three times the tuition of California residents. Since the global financial crisis, ramping up Chinese enrollment has become a quick fix for universities facing devastating budget cuts. But it’s also stirring resentment among locals, who fear admission to their public universities is being auctioned to the highest bidder.

Hollywood and Silicon Valley face a different kind of Chinafornia conundrum: While the transpacific flow of funding and talent reaches new heights, the Chinese government has tightened censorship to levels not seen in decades.

Chinese tech and film investors are also pouring into California. They’re seeking out unicorn startups and filmmaking know-how. China’s tech juggernauts have all established research facilities or investment beachheads in Silicon Valley and Chinese filmmakers are looking to work with -- or outright acquire -- their American peers.

But when Silicon Valley and Hollywood execs return the visit, they are rebuffed. Many of Silicon Valley’s flagship companies -- Facebook, Google and Twitter, to name a few -- are outright blocked in China. Hollywood studios face sharp limits on the number of films that can enter China and they are often forced to sanitize scripts for fear of offending Chinese government censors. But the lure of a billion-person market remains strong: It has Facebook founder Mark Zuckerberg studying Mandarin and Minnie Mouse dressing in a cheongsam at the new Shanghai Disneyland.

That attraction and repulsion leaves America’s two cultural powerhouses facing loaded ethical questions. How far will they bend to Chinese government demands to ensure market access? How can they engage ordinary Chinese people without abandoning their commitment to free expression?

Across these industries -- real estate, education, technology, entertainment, and many more -- we see the foundation being built for a new brand of U.S.-China relations. It’s one that’s full of new possibilities, but also creates local divisions with global implications. How we navigate these tradeoffs will set the stage for the most important bilateral relationship in the world. It’s up to the people of Chinafornia to get this new engagement right -- to guide these flows so they expand horizons and open opportunities for people in both countries. Let’s get to work.