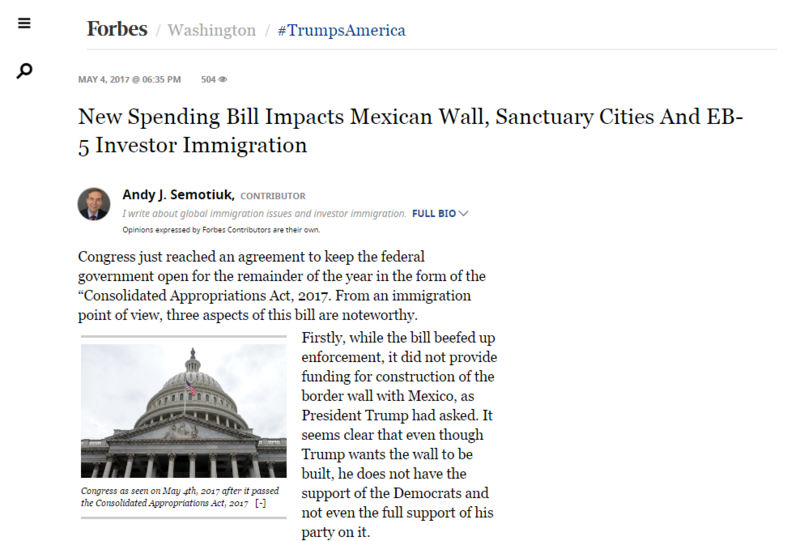 Congress just reached an agreement to keep the federal government open for the remainder of the year in the form of the “Consolidated Appropriations Act, 2017. From an immigration point of view, three aspects of this bill are noteworthy.

Firstly, while the bill beefed up enforcement, it did not provide funding for construction of the border wall with Mexico, as President Trump had asked. It seems clear that even though Trump wants the wall to be built, he does not have the support of the Democrats and not even the full support of his party on it. It seems doubtful that he will be able to corral enough of his Republican compatriots to back him in this effort. There's a lot of skepticism about the wall in Congress, even if it is very popular for the rank and file in Trump's mid-America country. How he proposes to get Mexico to ultimately pay for it is even less clear. What is more, arrests of would be immigrants along the Mexican border have declined sharply over the last six months which makes building the wall even less of an apparent priority.

The Congressional bill also did not include a “sanctuary cities” rider that the Administration had proposed. The rider would have permitted the Administration to withhold federal funding from jurisdictions that do not honor Immigration and Customs Enforcement (ICE) detainers to hold jailed inmates for review by ICE officials or otherwise fail to cooperate in the area of immigration enforcement.  To better understand the significance of this development, a little background on the sanctuary jurisdictions issue is in order.

In January President Trump signed an executive order (EO 13768) that in part tried to restrict funding to so-called sanctuary jurisdictions.  Though the concept of sanctuary cities has been around for a while, there is no real legal definition of this term, nor an official explanation provided by the U.S. Citizenship and Immigration Service.  “Sanctuary” has become a label, seen as an honor by some and as an insult by others.  The absence of a clear definition was part of the problem with the President's executive order.