Life Beyond H-1B In US 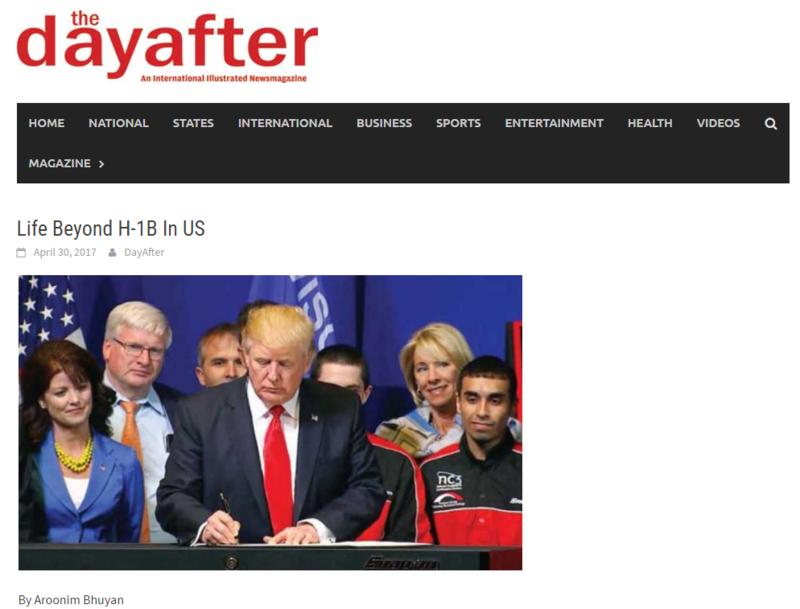 US President Donald Trump signed an executive order for tightening the rules of the H-1B visa programme, the most sought-after by Indian IT firms and professionals, to stop “visa abuses”. The order directs the agencies to suggest changes to help ensure that the visas are awarded to the most skilled, best-paid immigrant workers.

“Right now, widespread abuse in our immigration system is allowing American workers of all backgrounds to be replaced by workers brought in from other countries to fill the same job for, sometimes, less pay. This will stop,” Trump told an enthusiastic audience in Wisconsin before signing the order. He said the order sets in motion the first steps to initiate “long-overdue” reforms to end “visa abuses”.

The cap for US H-1B visas for 2018 may have been reached but immigration experts say that Indian applicants, who form the majority of the recipients of such visas, have other options as well — such as the L1 and EB5 visas.

US missions across the world started accepting H-1B applications for fiscal 2018 from April 3. According to the US Citizenship and Immigration Services (USCIS), it received 199,000 H-1B petitions during the filing period.

On April 11, the USCIS used a computer-generated lottery to select enough petitions to meet the 65,000 general category cap and the 20,000 cap for those with advanced US degrees.

The new Donald Trump administration has also sought to make acquiring H-1B visas tougher. The USCIS on March 31 issued a clarification that computer programmers, to be eligible under the H-1B visa norms, must prove that theirs is a specialty occupation. Merely obtaining a computer degree may not be enough.

Meanwhile, a private member’s bill was also introduced in the US Congress by Democrat Zoe Lofgren which seeks to increase the minimum salary of H1-B visa holder to a whopping $130,000 from the current minimum of $60,000.

The bill, if passed, will impact the margins of IT companies, the biggest beneficiaries of the H1-B visa programme, or their clients will face higher charges for the work performed, Mark Davies, Global Chairman of Davies & Associates, LLC, which specialises in US immigration law, told IANS in an email interview.

According to Abhinav Lohia, Partner and Practice Chair of India and Southeast Asia at Davies & Associates, Indian companies will now have to scout for American talent or opt for alternatives like L1B or L1A visas to send workers to the US.

L1 visas facilitate the temporary transfer of a foreign worker in the managerial, executive or specialised knowledge category to the US to continue employment with an office of the same employer.

The L1 visa can help as “a lot of US companies prefer to deal with a local company or someone on the ground in the United States representing a foreign company instead of dealing directly with the foreign company”, Lohia explained.

“US presence gives the US companies/clients confidence since US courts will most probably have jurisdiction over disputes,” he added. “Also, the companies that establish a presence in the United States also register their intellectual property there, which again is viewed favourably.”

Of course, the H-1B and L1 visas are for employees. If you have enough money, you can opt for the EB5 visa, Lohia said.

In recent times, there has been a sharp hike in the number of Indian applicants for EB5 visas and Lohia attributed multiple reasons for this, including the fact that the US is a better country to retire in and there are more opportunities to expand business operations.

According to Davies, parental gifting of the funds necessary for an EB5 application may now be the only option for Indian students seeking employment after graduation in the US.

Lohia said that EB5 and L1A visas may lead to permanent residence and eventually to US citizenship faster.

“It puts an end to the dependence on the employer for staying in the United States,” he said.

“Upon being fired from his/her job, an H1-B visa holder may have to leave the country along with his/her family, whereas once someone gets permanent residence they are no longer dependent on others for their stay in the US as long as they are law-abiding and renew their Green Card on time.”

What Is H-1B Visa Program

* The H-1B visa is an employment-based, non-immigrant visa category for temporary workers. An employer must offer a job and apply for your H-1B visa petition with the US Immigration Department.

* The programme is open to a broad range of occupations, including architects, professors and even fashion models.

* It is meant for jobs requiring specialty skills that cannot be filled by a US worker. Many of these jobs happen to be in tech.

* According to the US Labor Department, the top three H-1B occupations are computer systems analysts, application software developers and computer programmers — and those three account for roughly half of the department’s H-1B certifications.

* The tech industry says companies have trouble filling positions with American workers and must turn to other countries through this program.

* Critics of the H-1B programme argue it is being used by companies to hire temporary foreign workers on low salaries to displace local American workers on higher salaries.

* They have targeted Indian IT companies such as Infosys, Tata Consultancy Services and Wipro accusing them of “gaming the system” by cornering a large portion of the annual disbursement of H-1Bs with a large number of applications.

* A White House statement on Wednesday said H-1B visas are supposed to bring the highest skilled and paid labour to the US. But according to studies, 80% of the approved applications were for the two lowest wage levels allowed.

* The Trump administration says more of the jobs performed by those people could and should be filled by Americans.