The 'Golden Visa' program into the US is set to expire, and that's worrying many in China 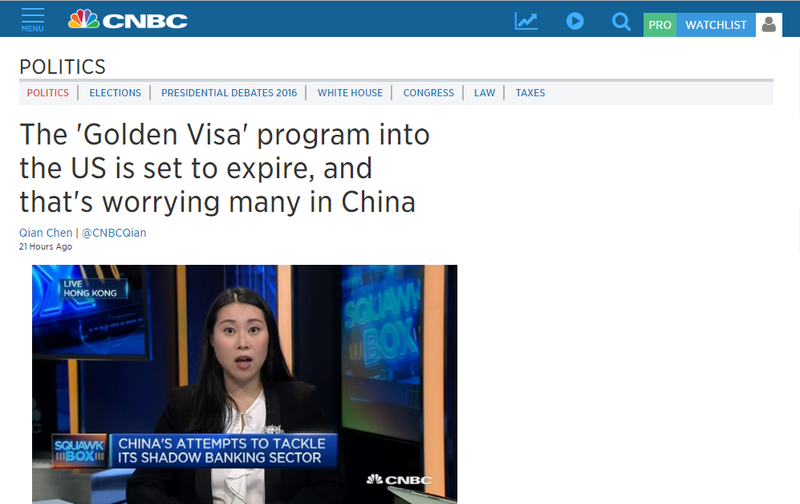 It only took one winter night for a Chinese mother to make the decision to leave her country. In the following two months' time, she rushed to prepare $500,000 in cash, trying to submit all her application documents ahead of April 28 — the expiration date for the current U.S. EB-5 immigrant investor visa program.

"My child had been sick for the entire winter and the whole family got respiratory infections due to Beijing's haze weather," said Liu, 33, who requested not to share her full name for privacy reasons.

"When I was pregnant, the government promised to treat air pollution. Now, my son is already three years old, but Beijing's haze has only become worse," she told CNBC over the phone. "I need a backup plan."

Liu's plan is to obtain U.S. green cards for her family through the EB-5 program, which is often called the "Golden Visa" by immigration lawyers because it provides a fast path for rich foreign investors to "buy" residency or even citizenship in the U.S.

Firstly introduced as part of the 1990 Immigration Act, the EB-5 program allows foreigners, who invest between $500,000 and $1 million in qualified projects in the U.S., to apply for permanent resident status for themselves and their families. Generally, the money will be returned to investors within a few years' time.

Initially, the visa program wasn't popular — during the first 18 years, it had always fallen short of the program's annual ceiling of 10,000 quotas. In 2003, for example, the government only issued 65 EB-5 visas to foreign investors.

However, the 2008 financial crisis was a game changer. With liquidity squeezed and few banks willing to lend, developers found the EB-5 program a convenient way to raise cheap capital.

According to the U.S. Commerce Department, between fiscal years 2012 and 2013, more than 11,000 immigrant investors provided a combined $5.8 billion in capital through the EB-5 program and supported 562 projects, which generated about 174,000 jobs in the U.S.

In recent years, the EB-5 visa program has seen growing interests from Chinese millionaires, with as much as 85 percent of the program's applicants coming from mainland China, according to the U.S. Citizenship and Immigration Services.

"Children's education, less pollution and transferring assets overseas are three top reasons why U.S. green cards are so attractive to many Chinese investors," said Law, an EB-5 immigration agent based in Los Angeles, who declined to share his full name for professional reasons.

Law's view was echoed by Liu.

"Many of my friends have already submitted applications for EB-5 visas. A few years ago, only the Chinese super-rich were applying; but now, middle-class families are starting to apply as well," Liu told CNBC. "Some even sell their apartments in order to raise enough money."

Despite strong demand from Chinese clients, Law predicted limited room for further growth, pointing to potential policy changes under President Donald Trump's administration, stricter capital control by the Chinese government and the backlog of the EB-5 program itself..

Critics have called for the program's termination, arguing that it has been plagued by widespread fraud and political corruption, which might facilitate money laundering, investment fraud or even terrorist travel.

The current program is up for renewal on Friday, and its fate now rests with the new administration and Congress. Although the White House has not provided any official statement on the program, Trump's earlier immigration actions have stirred fear among EB-5 visa applicants. 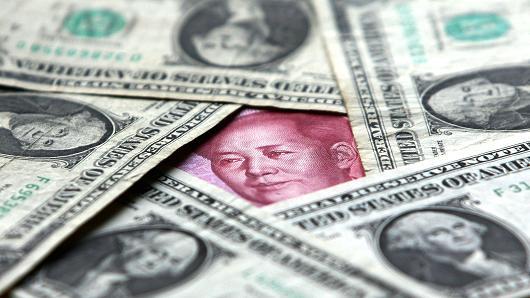 "Many clients urged us to file their applications by the April 28 deadline because they are worried that the government will tighten visa rules, or even terminate the program altogether," said Law.

In January, the Department of Homeland Security proposed to increase the minimum investment amount required for the EB-5 program from $500,000 to $1.35 million for projects in rural or high-unemployed areas; from $1 million to $1.8 million for developments in low-to-average unemployment areas.

The increase in capital requirement, if approved, would immediately cool down Chinese investors' demand, according to Law.

"Most applicants just can't afford that much money," said Law. "Among my clients, nine out of 10 are investing in the $500,000 program. They are staying in China and are totally thrown into passivity. EB-5 projects are not risk-free — investing more money means higher risks."

In China, the currency exchange quota for individuals remains $50,000 per person per year, but most Chinese EB-5 visa applicants use two ways to avoid currency restrictions. The first is to transfer through underground banks, and the other is called "Ants Moving House," which means to recruit friends or family members to exchange currency and transfer funds overseas.

"Now, you only need 10 people for an amount of $500,000, but you might need to find another 17 people if the new policy increases capital requirement," said Law. "The Chinese government is going after such transfers and will impose stricter control."

Law told CNBC that his company plans to slowly withdraw the EB-5 visa services on the concern that tightening immigration policies under the Trump administration will cool down the visa business.

In recent years, skyrocketing applications from Chinese investors have created a significant backlog and extended the time frame for their petitions to be approved.

"Today, non-Chinese applicants need to wait about 7 years to get the official green card, but Chinese nationals will probably have to wait 10 years due to the backlog," Law told CNBC. "The long wait has made EB-5 visas less attractive."

However, he does see a silver lining in the new policy.

"Higher capital requirements will result in fewer new applicants. The backlog will then improve and the long wait for Chinese applicants would become shorter," he added.

For Liu, the wait is just starting.

"Waiting a few years might not be a bad thing for us," said Liu.

"Nobody knows what's going to happen next, but at least this is like buying a 'life insurance' for the family."