EB-5 investor visa program being extended by one week 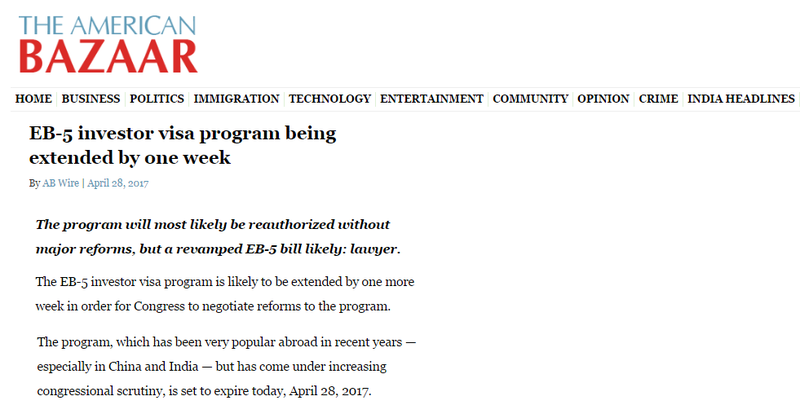 The EB-5 investor visa program is likely to be extended by one more week in order for Congress to negotiate reforms to the program.

The program, which has been very popular abroad in recent years — especially in China and India — but has come under increasing congressional scrutiny, is set to expire today, April 28, 2017.

The American Bazaar has learned that the EB-5 extension was part of the continuing resolution (CR) passed by both the House and the Senate Friday. President Trump is expected to sign it before midnight Friday.

Ronnie Fieldstone, an attorney with Arnstein & Lehr EB-5 attorney, said “the program will most likely be reauthorized without major reforms this time around but expects Congress to pass a revamped EB-5 bill when the program sunsets September 30th.”

Fieldstone serves as corporate and securities counsel for a number of industries on EB-5 visas.

“Congress opted to extend the program by one week because they ran out of time to come up with a comprehensive plan to reform the EB-5visa program, which creates jobs and injects foreign capital into the US economy,” Fieldstone, who’s based in Miami, FL, said. “We expect Congress to move forward with plans to strengthen the program to get rid of the bad actors and better protect investors.”

For obtaining EB-5 visa, which eventually leads green cards for investors and immediate family members, an applicant has to invest anywhere from $500,000 to more than a $1 million. The lower amount is for investments in the so-called rural “Targeted Employment Area.”

The program was created by Congress in 1990 for stimulating the economy through foreign investments. It has been reauthorized several times since then.

In recent years, Chinese investors have obtained a majority of these visas, causing concerns among hard line GOP immigration opponents, as well as some Democrats.

In January, Sen. Dianne Feinstein had introduced a similar bill in the Senate.