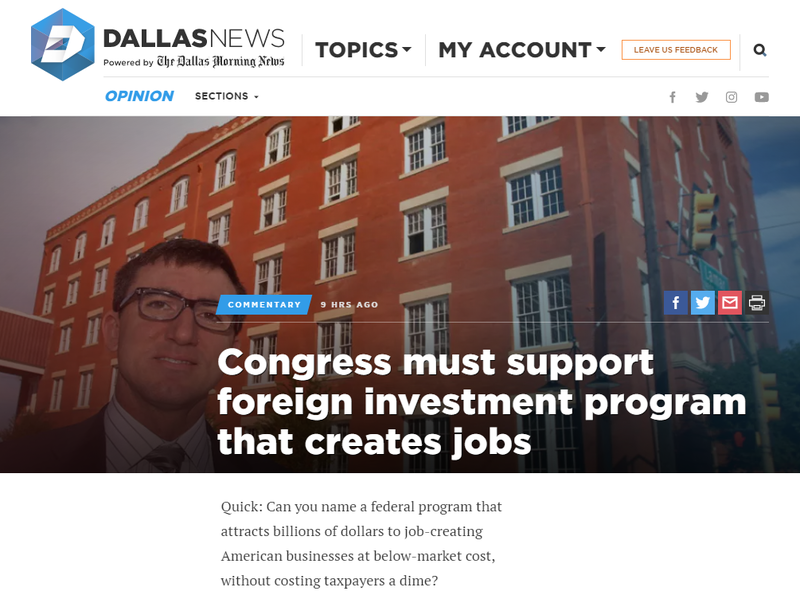 Quick: Can you name a federal program that attracts billions of dollars to job-creating American businesses at below-market cost, without costing taxpayers a dime?

It's not a trick question. It's called the EB-5 program, and it eases the pathway to U.S. residency for foreigners who invest at least $500,000 in businesses that create at least 10 U.S. jobs. The Commerce Department reports that in fiscal 2012-13 alone, the program generated more than $5.8 billion in foreign investment to 562 projects nationwide, creating more than 174,000 jobs.

That's a lot of jobs, and they cost taxpayers nothing.

Even in today's Washington, you might assume such a program would enjoy broad support. Generally, you'd be right. Since the early 1990s, EB-5 has been reauthorized repeatedly, always with overwhelming bipartisan backing. But unless Congress acts quickly, this vital job creation engine will expire on May 5.

That would be bad for Dallas. I founded Civitas Capital Group in 2008 based on an innovative public-private partnership with the city of Dallas, through which Civitas uses EB-5 to attract foreign capital to high-quality Dallas projects. Since late 2009, Civitas has invested more than $350 million of EB-5 capital in Dallas, including:

These projects created real jobs for real people, in the heart of Dallas. And given the near-total lack of liquidity that prevailed immediately after the financial crisis, the projects would have been difficult — to put it mildly — absent low-cost EB-5 capital.

EB-5 is also slated to partially fund an exciting new project at historically black Paul Quinn College in southern Dallas. Preliminary plans include new residential units, retail and on-site early childhood education. Like everything Paul Quinn does, this project will be the result of diverse community stakeholders collaborating to do something extraordinary. Civitas plans to combine EB-5 capital with other nontraditional capital, such as tax credits and grants, to make the project feasible.

At this point, you should be asking yourself: So where's the problem?

Essentially, EB-5 is a victim of its own success. As it morphed from obscure afterthought to established capital market, EB-5 inevitably attracted fraudsters, prompting Securities and Exchange Commission scrutiny and enforcement actions against several EB-5 groups that fleeced investors. But even though these represent a mere fraction of EB-5 projects, some detractors have called for the program's termination.

Stakeholders on and off Capitol Hill also disagree on proposed reforms intended to incentivize investments in rural and impoverished areas. This has resulted in a series of short-term reauthorizations, creating uncertainty among investors who rightly hesitate to entrust their capital to a program that could expire before they complete the arduous, multiyear EB-5 process.

I applaud the SEC for aggressively pursuing wrongdoers, and I am not alone. Civitas and virtually every other EB-5 stakeholder, from major New York City developers to rural North Dakota operators, agree with calls for higher standards and tougher bad-actor penalties. Such reforms are necessary to maintain the confidence of investors, policymakers and the American public.

And while Congress should debate rural investment incentives, they cannot forget that EB-5 is working, creating American jobs at no cost to the taxpayer every day — and that is a very good thing. But the program needs stability to maximize its power to attract investment and create jobs.

Congress members must work out their differences and clearly signal that EB-5 is here to stay. If they continue to kick the can or, worse, allow the program to expire, the U.S. will lose billions of dollars in investment to Canada, the U.K. and other countries with similar programs. The resulting foregone investment and job creation would be a significant and entirely avoidable loss for America — and for Dallas.