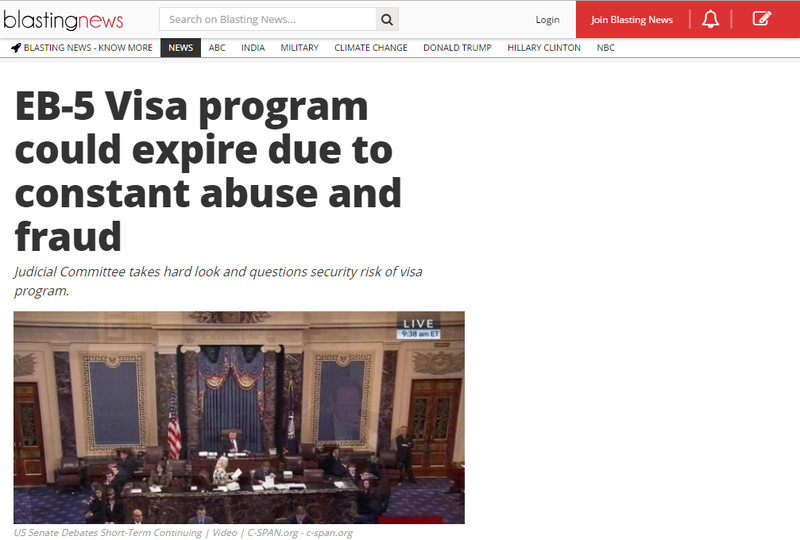 The #EB-5 Visa program; designed to issues work visas and provide a pathway to citizenship for foreign nationals who invest in certain U.S. development projects, has been filled with years of corruption and scandal. So, it's no surprise that once again the program raises concern after the recent report of how the founders of the California #Investment Immigration Fund, Tat Chan, Victoria Chan, and Fang Zen, used the EB-5 Visa program to allegedly scam Chinese national investors from 2009 to 2016 out of more than $50 million on fake development projects. The scam also allowed over 100 Chinese nationalists to improperly obtain US citizenship, many of whom were found to be or connected with Chinese fugitives and/or criminals..

Since the program is about to expire at the end of April, providing Congress does not take any action; Senate Judiciary Committee Chairman Chuck Grassley is questioning its worthiness as lawmakers continue to press for reforms. #Senator Grassley, a longtime advocates for EB-5 Visa reform, last Friday, took pen in hand and wrote Homeland Security Secretary John Kelly to request details on the fraudulent regional center and the investors who funded it. He also asked whether USCIS had ever audited the supposed development project and why charges and arrests have not been imposed on the three alleged fraudsters -- especially since investigators on the case determined that some of the 30 investors who received their investment money back, about $10 million, are pursuing legal permanent residency, despite the fact that none of the visa program requirements had been fulfilled..

Grassley stated in his letter that this is not the first time that criminals have been allowed to enter the United States under the EB-5 Visa program and cited three different occasions; once in 2013 by Iranians to facilitate terrorism, earlier in 2017, when an ex-wife of China's third most wanted government official who plead guilty of EB-5 fraud by submitting false documents, and the case of the ex-wife of a former Chinese government official they did a plea deal with to forfeit property that was worth millions of dollars. He noted that such abuse puts United States security at risk and wondered why information on criminal individuals is not discovered before they enter the United States.

Senator Grassley, as Chairman of the Judiciary Committee, noted in a recent letter to Congressional leaders that the years of abuse through this program are well documented and has caused serious harm to the very communities that it was intended to help, despite the fact that Congress has tried in the past to reform the program. He also recommended that no extension to the program be granted without meaningful reform to the security and integrity of the program.