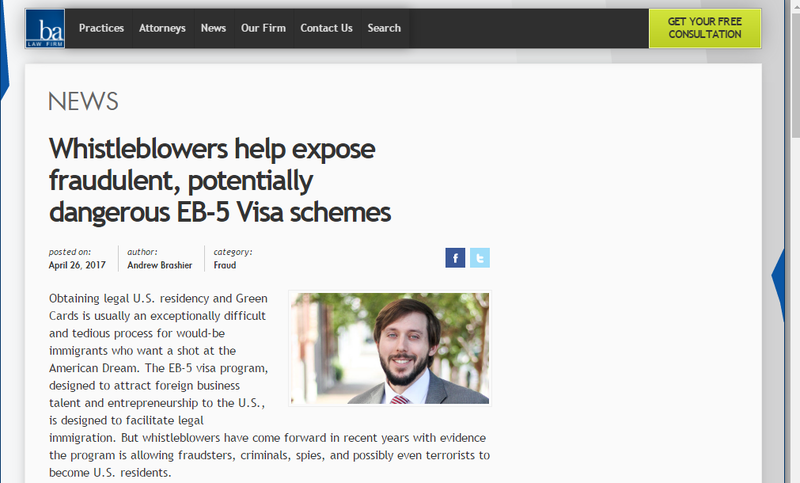 Obtaining legal U.S. residency and Green Cards is usually an exceptionally difficult and tedious process for would-be immigrants who want a shot at the American Dream. The EB-5 visa program, designed to attract foreign business talent and entrepreneurship to the U.S., is designed to facilitate legal immigration. But whistleblowers have come forward in recent years with evidence the program is allowing fraudsters, criminals, spies, and possibly even terrorists to become U.S. residents.

Administered by the U.S. Citizenship and Immigration Services (USCIS), the EB-5 visa program’s objective is to stimulate the U.S. economy through job growth. The program allows foreigners to apply for a U.S. Green Card if they invest at least $500,000 in an approved project that will create or preserve at least 10 permanent full-time jobs for qualified U.S. workers.

The program has worked as intended in many cases over the years, but a number of whistleblowers have come forward in recent years exposing the program’s flaws, which they say allow wealthy foreigners to buy U.S. residency for $500,000 with little or no investments being made.

That’s because, as multiple recent cases demonstrate, the program is rife with fraudulent brokers who collect funds from foreign investors and then use those funds for self-enrichment rather than legitimate economy-building investment activities.

U.S. officials have said they have tightened weaknesses in the program, but whistleblowers continue to raise concerns about EB-5 applicants coming to the U.S. while their funds are used by the operators of middleman law firms and investment agencies to underwrite lavish lifestyles. Meanwhile, some of the foreign investors have been caught engaging in illegal activities of their own, such as running money laundering operations and scams.

Earlier this month, federal authorities cracked down on a California law firm suspected of operating a scheme that allowed more than 100 Chinese immigrants into the U.S. But rather than investing funds, the California Investment Immigration Fund, LLC, hired high school students to pose as full-time employees for fake projects and used the money to buy multi-million-dollar homes and luxury items.

The California Investment Immigration Fund is just one example of many such fraudulent schemes. There have been numerous other occurrences of such fraud recently occurring all over the country.

The U.S. Securities and Exchange Commission (SEC) provides both an incentive and a path for whistleblowers to report fraudulent EB-5 activity. In just the last two years, the agency and other federal authorities have uncovered multiple EB-5 fraud schemes totaling hundreds of millions of dollars, often with the help of whistleblowers.

In March, a Chicago hotel developer was sentenced in the largest EB-5 visa fraud scheme to date. The developer was charged with misleading 290 Chinese investors who provided $912 million. Such schemes are often successful because they target investors who may care more about gaining U.S. residency than about a return on investment.