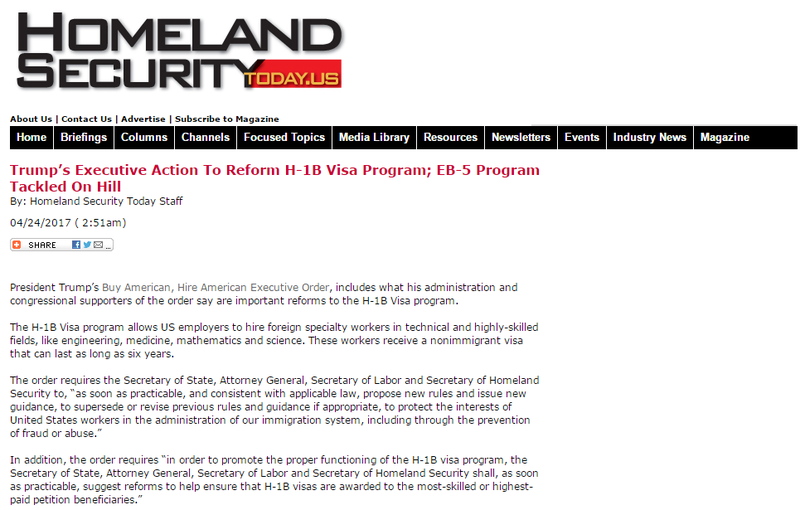 The H-1B Visa program allows US employers to hire foreign specialty workers in technical and highly-skilled fields, like engineering, medicine, mathematics and science. These workers receive a nonimmigrant visa that can last as long as six years.

The order requires the Secretary of State, Attorney General, Secretary of Labor and Secretary of Homeland Security to, “as soon as practicable, and consistent with applicable law, propose new rules and issue new guidance, to supersede or revise previous rules and guidance if appropriate, to protect the interests of United States workers in the administration of our immigration system, including through the prevention of fraud or abuse.”

In addition, the order requires “in order to promote the proper functioning of the H-1B visa program, the Secretary of State, Attorney General, Secretary of Labor and Secretary of Homeland Security shall, as soon as practicable, suggest reforms to help ensure that H-1B visas are awarded to the most-skilled or highest-paid petition beneficiaries.”

As far back as 2008, a USCIS audit found intentional fraud or technical violations in almost 21 percent of H-1B visas applications the agency reviewed.

USCIS said, “The H-1B visa program should help US companies recruit highly-skilled foreign nationals when there is a shortage of qualified workers in the country, yet, too many American workers who are as qualified, willing and deserving to work in these fields have been ignored or unfairly disadvantaged. Protecting American workers by combating fraud in our employment-based immigration programs is a priority for USCIS.”

Beginning immediately, USCIS said it “will take a more targeted approach when making site visits across the country to H-1B petitioners and the worksites of H-1B employees.”

From January 5 through March 28, USCIS began sending some cases between service centers in order to balance workloads.

House Committee on the Judiciary Chairman Bob Goodlatte (R-VA) said he applauded “Trump for his efforts to spur job creation, economic growth, and American competitiveness by improving our country’s high-skilled immigration programs,” saying, “The President’s Buy American, Hire American Executive Order directs the secretaries of the appropriate agencies to examine the H-1B Visa program and identify reforms that will root out fraud and abuse to ultimately make the program more workable for American businesses while protecting American workers.”

“I look forward to working with the Administration to ensure that our country’s immigration policies bolster job growth for US workers and do not undermine or take jobs away from them while ensuring American businesses have access to the workers they need.”

Meanwhile, Goodlatte and other lawmakers said there also need to be EB-5 reforms to “curb fraud, abuse and national security risks.

Bipartisan, bicameral Judiciary Committee leaders said in an announcement that they “reaffirmed their commitment to reform the troubled EB-5 investor visa program ahead of its scheduled expiration on April 28, or to let the flawed program expire if reforms are not possible.”

Senate Committee on the Judiciary Chairman Chuck Grassley (R-IA) and Sen. Patrick Leahy (D-VT), along with Goodlatte and ranking member John Conyers (-MI), “reiterated requirements of any meaningful negotiation as they continue to search for a compromise on EB-5 reform. The program has longstanding, well-documented fraud, abuse and national security concerns, and has drifted away from Congress’ original intent: spurring job creation in rural and economically depressed areas.”

“Despite the well-documented and rampant abuse of the EB-5 Regional Center Program that we have exposed in recent years, we remain committed to working in good faith with our colleagues and industry stakeholders to bring about much needed reforms to this troubled program,” the lawmakers said in a joint statement. “However, as we have made clear time and time again, any reforms must contain genuine and sincere changes to allow rural and distressed urban areas, the very communities this program is supposed to benefit, to compete for investment dollars. In addition, any reforms must address the many national security and fraud concerns by containing – without loopholes – compliance measures, background checks, and transparency provisions.”

“Just a few weeks ago,” they stated, “we were encouraged by a reasonable proposal offered by IIUSA, the nation’s largest EB-5 industry trade association, containing significant reforms to the program. The proposal was a good faith effort to address our concerns and provide long-term stability to the program, and could have served as a basis for reform negotiations.”

“As we have in the past,” the continued, “we remain willing to work with our colleagues and industry groups to produce meaningful reform. This must include strong transparency and anti-fraud measures, meaningful investment differentials, adjustments of the investment amounts to appropriately account for inflation, adequate set asides for both rural and urban distressed areas, and an end to the program’s abusive gerrymandering practices.”

In a recent letter to congressional leadership, the lawmakers, along with Senate Judiciary Committee ranking member Dianne Feinstein (D-CA), stated the program should expire absent these reforms.