US Business Immigration in 2017 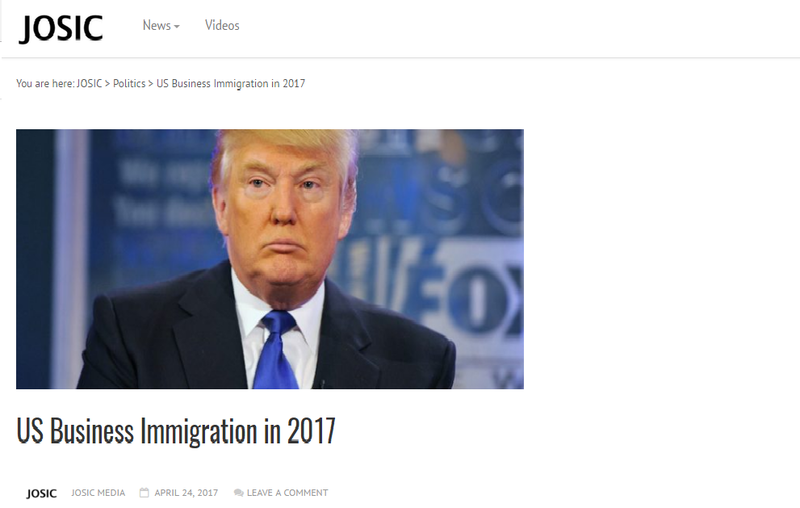 As the first quarter of 2017 draws to a close, it is clear that 2017 continues to offer opportunities for businesses to expand into the US market, transfer foreign national employees to a US branch, and the opportunity for foreign investors to obtain green cards through a qualified capital investment. However, many people are wondering what changes are on the horizon regarding US business immigration law, as well as if the new presidential administration will affect their ability to travel to the United States for work or pleasure.

Regardless of any potential changes to US immigration law resulting from a Trump presidency, the United States is still a safe place to invest and grown a business. Since the election, interest in visa programs such as the E2 Treaty Investor Visa and EB5 Immigrant Investor Visa continue to rise. This may be in part due to the fact that Trump’s immigration rhetoric did not extend to these visa categories. However, since the election, Trump has even back-pedaled on his hard-line stance regarding the H1B Specialty Occupation visa category.

While the fate of undocumented aliens in the country remains uncertain, US business immigration will likely continue to be popular and contributed to the thriving US economy. Additionally, any significant changes to US immigration policy would need to be approved by Congress. A sitting president can only do so much utilizing executive orders.

Some potential clients have expressed concern that a Trump presidency will lead to the dissolution of popular business immigration categories like the E2 Treaty Investor visa. Fortunately, this is unlikely. Many of the E2 Treaty countries have maintained the relevant treaty with the United States for dozens of years. Some, as in the case with the United Kingdom, have been in place for hundreds. The treaty of commerce and navigation between the United Kingdom and the United States has been in place since the reign of George III, in 1815. The United States can only withdraw from a ratified treaty pursuant to the terms of the agreement. Additionally, for Trump to unilaterally pull out would be highly unpopular with the E2 treaty countries, the American public, and US nationals who enjoy the same advantages of starting a business abroad in a reciprocal E2 treaty country.

Immigrant entrepreneurs and investors were seldom mentioned during the campaign (if at all), and it was even revealed that President-Elect Trump’s son-in-law used EB5 investor funding for one of his real estate development projects. In fact, the EB5 Immigrant Investor Visa Program’s recent extension has made it even more attractive to foreign investors looking to permanently immigrate to the United States.

The EB5 Regional Center investment was set to expire on 9 December 2016. As in the past, the program was temporarily funded and extended until 28 April 2017 – with no changes to the minimum investment amount or requirements. What makes this extension unique is that it will likely be the last one before Congress raises the minimum capital contribution – something which has been in discussion for the past few years. This temporary extension ‘as is’ allows investors to submit their EB5 petitions during the first four months of 2017 at the reduced investment amount of $500,000 USD for projects located in Targeted Employment Areas (TEA). This is surely a welcomed relief for any investors who may have failed to organize their petitions before the 9 December 2016 deadline.

Along with the extension of the EB5 Program, USCIS will significantly increase their filing fees for the I-526 Petition and I-924 Application for Regional Center Designation, beginning 23 December 2016. Presently the filing fee to submit an EB5 Petition is $1,500 USD. From 23 December that fee rises to $3,675 USD – an increase of $2,175 USD. Perhaps the most significant EB5 fee increase is for business persons looking to establish a USCIS approved Regional Center. That fee, which is current $6,230 USD jumps to $17,795 USD – an increase of 186%.

Regional Centers are also required to file an annual certification to maintain their designation with USCIS. There is currently no fee for this process, but a fee of $3,035 USD will be introduced along with the other USCIS fee changes. The large increase in filing fees for Regional Center Designation is aimed at preventing EB5 fraud by limiting applications to serious businesses with the means to support large EB5 projects. It is likely that 2017 will see a decrease in I-924 Applications given the large fee.

The pending USCIS fee increases will affect other US business immigration categories along with the EB5 visa. Form I-129, used for filing L and H1B visas, among other, will increase to $460 USD. Sponsoring an alien worker for a green card via form I-140 will be raised to $700 USD. These fee increases, while significantly less than the EB5 fee, may deter smaller US companies from sponsoring foreign workers in a non-immigrant or immigrant status.

Notwithstanding fee increases and a new US President, the 2017 prospects for business immigration look bright. Companies are still expanding stateside, and the need for specialised foreign employees remains high. The extension of the EB5 Immigrant Investor Visa Program will continue to make the United States a cost-effective options for immigrant investors looking to obtain permanent resident status.