How our nation's immigrants can fund American infrastructure 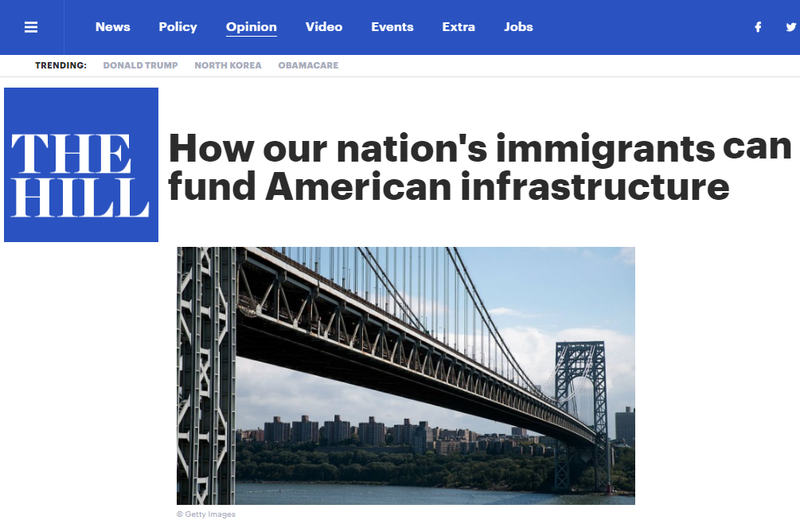 We may be about to fund sorely-needed American infrastructure projects at no cost to taxpayers while simultaneously showcasing one approach to merit-based immigration.

Next week, Congress is expected to advance a bill to extend the EB-5 program, which grants residency to investors committing $500,000 to $1 million to approved development projects that subsequently create full-time jobs. While the program has had a long history of job creation, of late it has demonstrated its capacity for bringing in new dollars to fund pivotal infrastructure developments as well.

Recently, for instance, the EB-5 program has funded the expansion of Seagirt Marine Terminal at the Port of Baltimore, and a new state-of-the-art fire station replacing Engine Company 13 in Washington, DC. In the past, these redevelopment projects might have drawn from more traditional lenders. But following the economic downturn and the collapse of the traditional lending market, EB-5 has proven itself an effective tool for states, cities, and municipalities to leverage as replacement for those otherwise lost redevelopment dollars.

And compared with the American Recovery and Reinvestment Act of 2009, which cost American taxpayers between $185,000 and $278,000 per job created or preserved, the EB-5 program funds these projects and creates these jobs at no cost to the U.S. taxpayer. According to our projections, which are based off numbers from the Department of Commerce, the job creating power of EB-5 would be more than 800,000 jobs from 2012 through 2016.

The program also serves as one example of how an aspect of merit-based immigration can be encouraged. EB-5 participants are taking on significant risk with the hopes of creating American jobs and obtaining conditional permanent residency.

All this said, when Congress examines this bill in the coming days, there are ways in which it can be made even more effective. For one, there could be a higher volume of investments coming through the door. At present, EB-5 visas make up only 7 percent of all available employment-based visas, or roughly 10,000 out of 140,000.

There’s no real downside to upping this number, as unused EB-5 visas can be reallocated to other employment-based categories and any reallocation is unlikely to significantly impact visa availability for other categories. On the upside, we can create more jobs and allocate more funds towards improving our roads, bridges, and ports.

Equally, if not more, important is ensuring the integrity and strength of such investment projects. The industry has made significant gains in establishing best practices for transparency, security, and compliance. This is natural, as more and more projects come to investors, those investors become more sophisticated in their due diligence; meanwhile, appropriate controls, compliance programs, and investor protections become essential aspects of a project’s marketability. Congress, though, could help solidify these best practices in the industry.

Next week, members of Congress have the ability to renew and improve a bill that will allow immigrants to continue to make invaluable contributions to job creation and infrastructure needs in this country. Sure, we might be living in a time of rampant partisanship in Washington. But this might be a win for both sides.