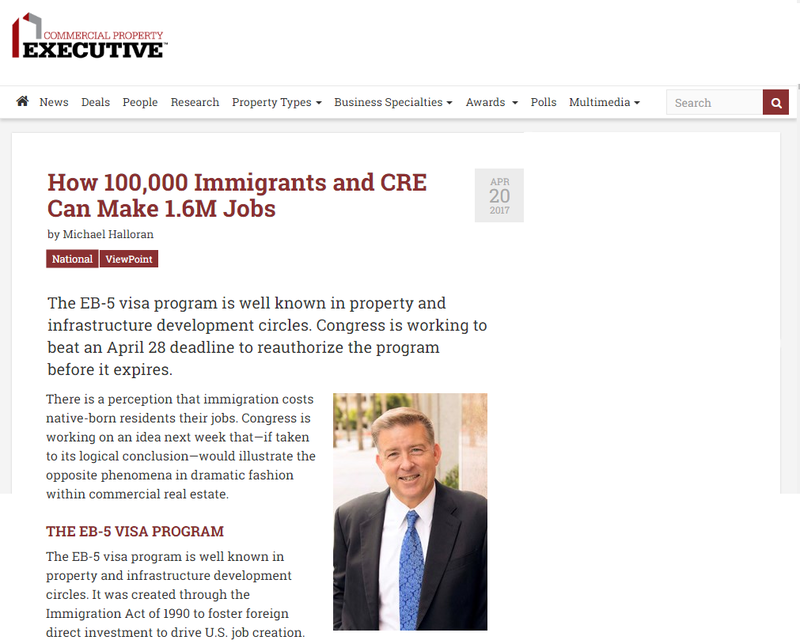 The EB-5 visa program is well known in property and infrastructure development circles. Congress is working to beat an April 28 deadline to reauthorize the program before it expires.

There is a perception that immigration costs native-born residents their jobs. Congress is working on an idea next week that—if taken to its logical conclusion—would illustrate the opposite phenomena in dramatic fashion within commercial real estate.

The EB-5 visa program is well known in property and infrastructure development circles. It was created through the Immigration Act of 1990 to foster foreign direct investment to drive U.S. job creation. Requiring an investment of $500,000 to $1 million into government approved projects—typically large retail, hospitality, residential and infrastructure projects—each investment must create 10 jobs for the immigrant to qualify for conditional permanent residency in the United States. EB-5 has become a popular and highly successful source of capital for development projects throughout the country. Congress is working to beat an April 28 deadline to reauthorize the program before it expires.

An increase in EB-5 visa allocations to 100,000 annually at the newly proposed investment amounts the government is considering, if fully subscribed, would result in $100 billion of annual capital investment, primarily in real estate development. Based on current Department of Commerce data and projecting forward, that would scale to 1.6 million jobs—at barely any expense to U.S. Taxpayers.

This could also mean a $1 trillion infusion for development and infrastructure in four years. Historically EB-5 capital has been approximately one third of the capital stack used to fund a project, which would equate to an additional $200 billion of private sector capital on top of the EB-5 portion, or $300 billion a year, again if fully subscribed. In order to ensure a high level of EB-5 subscriptions, the country could look to the over-subscribed H1B category where there are approximately 233,000 applications annually. Allowing corporate sponsors as a source of capital for the EB-5 immigrant, excess H1B demand could be directed into the job producing EB-5 category.

The economic crisis dramatically drove the growth of EB-5 for property development. As traditional sources of lending in the real estate marketplace dried up, builders across the country began to recognize EB-5 as a cost effective source of capital. In the last seven years EB-5 demand has exploded, with applications growing from approximately 1,000 in 2009 to being oversubscribed at 14,000 applications against 10,000 available visas by 2015. Through that period EB-5 resulted in billions of dollars of capital used successfully in hotels, multifamily, mixed use, healthcare, long-term care facilities, harbors, airports, schools, energy and numerous other types of development. Recently the Department of Commerce performed a study regarding the job creating efficacy of EB-5. Evaluating the 24-month period of 2012 and 2013, it was concluded that EB-5 job creation through the period indicated 174,000 new jobs from a two-year total of 12,000 applications. That is the equivalent of 4.3 percent of U.S. job growth over the report’s evaluation timeframe. Extrapolating the DOC’s job multiplier across 2012 through 2016, EB-5 subscription rates would have the job creating power of roughly 805,000 jobs, or the equivalent of 8.2 percent of U.S. job growth through the period.

THE NEED FOR LEGISLATIVE REFORM

Success in EB-5 has not been without issue; several instances of fraud, the small amount of capital being deployed in rural or distressed urban environments and significant processing backlogs in government immigration services have all led to calls for legislative action to improve the category. Currently, lawmakers and industry generally agree on major tenants of reform for the category. Increased investment amounts, tighter definition of targeted employment areas, integrity measures to reduce fraud, and increased fees to the United States Citizenship and Immigration Services to drive improved processing efficiency and reduce lengthy backlogs, have broad support throughout the industry and with legislators.

These aren’t trivial upgrades. They require focused attention, perhaps some long nights and collaboration on Capitol Hill with a deadline looming. However, in a departure from other issues, this particular aspect of U.S. immigration may offer a few green shoots in the search for bipartisan opportunities.