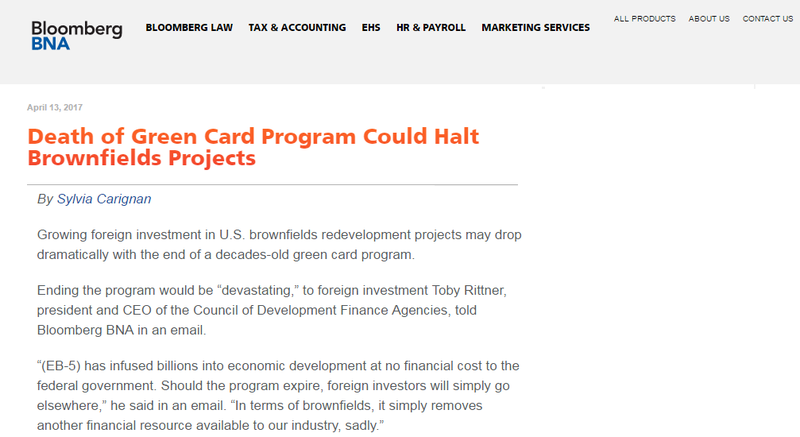 Growing foreign investment in U.S. brownfields redevelopment projects may drop dramatically with the end of a decades-old green card program.

Ending the program would be “devastating,” to foreign investment Toby Rittner, president and CEO of the Council of Development Finance Agencies, told Bloomberg BNA in an email.

“(EB-5) has infused billions into economic development at no financial cost to the federal government. Should the program expire, foreign investors will simply go elsewhere,” he said in an email. “In terms of brownfields, it simply removes another financial resource available to our industry, sadly.”

The program is set to expire at the end of April, unless Congress renews it, which could have a significant impact on the revitalization of U.S. brownfields.

Investors who buy brownfields to redevelop them, and generate jobs at those sites, may be eligible for green cards under the Immigrant Investor Program, also known as EB-5. The program was created in 1990 by an act of Congress.

Dan French, CEO and founder of Brownfield Listings, an online marketplace for real estate redevelopment, told Bloomberg BNA foreign investment in brownfields would increase if the EB-5 program was expanded.

The program is “riddled with fraud and raises national security concerns,” they wrote. The program’s purpose, directing investment to high unemployment and rural areas, has been forgotten, they wrote, and has become the subject of “rampant abuse.”

Jeff Telego, president of Risk Management Technologies Inc. and RTM Communications Inc., said there has been an uptick in contaminated real property transactions, even as demand for real estate may be starting to flag.

Brownfield sites are “the most significant untapped resource for redevelopment in this country,” Telego said.

Brownfields are properties that are ripe for redevelopment but have been affected by environmental contamination or have fallen into disuse. Thousands around the country have been cleaned up and redeveloped with the help of Environmental Protection Agency grants and municipal funds, but Telego estimates thousands still remain.

Foreign investors are most interested in brownfields sites in major U.S. markets, according to French.

That kind of investment is “more fuel for the redevelopment renaissance already well underway in the U.S.,” French said. But, he said, investors’ interest is difficult to measure on a large scale.

Of all brownfields properties, many of the simplest ones to remediate have been cleaned up and redeveloped with the help of federal grants, leaving complex, expensive properties behind. Local governments are often unable to remediate those sites because of the higher costs.

Since simple properties are becoming scarce, foreign investors—many from China, Russia and the Gulf states—have been taking on more risk and potentially more reward with complex properties, Telego said.

“I would argue … that the investor is less interested in the project because it is a brownfield, but rather because the projects that tend to go onto brownfields are transformative. They bring loads of jobs through clean-up, construction and post-development occupancy,” he told Bloomberg BNA in an email.

Telego said since the Trump administration is interested in backing infrastructure development, brownfields could get a boost, but federal support for brownfields has become uncertain under the president’s budget proposals.

Documents released earlier this year have indicated President Donald Trump’s administration wants to slash the Superfund budget by 30 percent, and would leave $75 million for the EPA’s Brownfields program. The program is currently funded at $250 million annually.