The one golden visa the Chinese wants could be running out 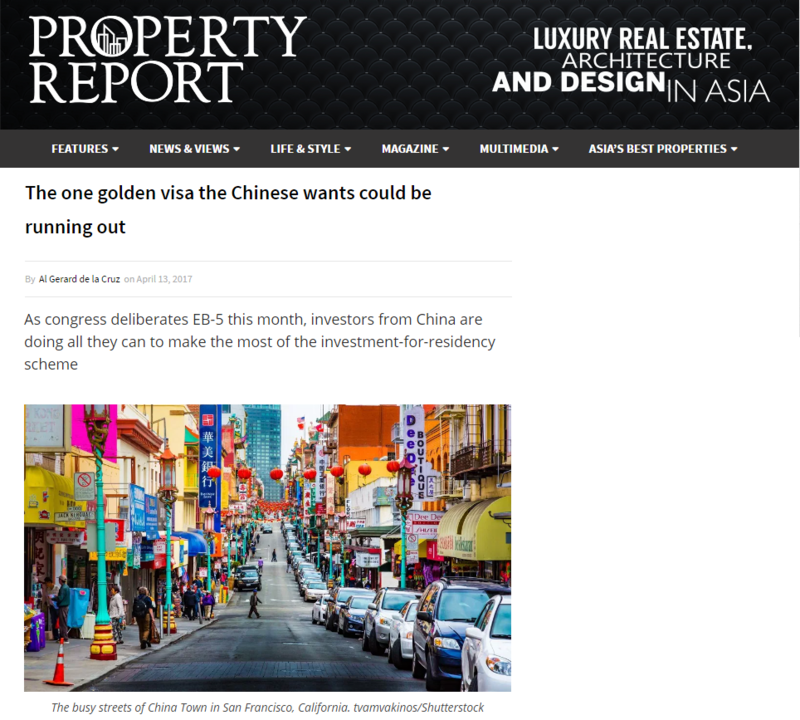 As congress deliberates EB-5 this month, investors from China are doing all they can to make the most of the investment-for-residency scheme

It is the golden visa of all golden visas for the Chinese, and it is about to be taken away from them.

Investors from mainland China are rushing to apply for the employment-based fifth preference (EB-5) visa program as DC lawmakers raise the prospect of hiking the minimum threshold required to secure the green cards. The program is due to expire next month, unless extended or amended.

“Some clients are demanding that we make sure their applications are submitted before April 28,” Judy Gao, director of the U.S. program at Can-Reach (Pacific), a Beijing-based agency that facilitates so-called EB-5 Immigrant Investor visas, told Bloomberg. “We’re working overtime to do that.”

Lawmakers are considering a hike in the minimum threshold, currently standing at USD500,000, to USD1.35 million. Meanwhile, federal agents raided last week a Los Angeles firm suspected of facilitating the issuance of US green cards to Chinese immigrants for sham investments. Around 100 Chinese nationals have allegedly put down USD50 million for the visas.

Established in 1990, EB-5 has provided several big-time real estate projects in the US with a hefty infusion of capital. One notable example is a Trump-branded tower in Jersey City run by relatives of White House senior adviser Jared Kushner, husband of First Daughter Ivanka Trump.

Chinese are already hard-pressed as they are in participating in the EB-5 program, in the face of strict restrictions imposed on capital flight from China. To protect its foreign reserves, Beijing has limited currency exchanges to USD50,000.

The Chinese are the biggest foreign buyers of homes in the US and the most active investors through the program, making up as much as 85 percent of the annual EB-5 investor total, data by Rosen Consulting and the Asia Society showed.

“EB-5 has been a key program for capital flight that has been abused by Americans and Chinese people seeking to game the system,” Andrew Collier, an independent analyst in Hong Kong and former president of Bank of China International USA, told Bloomberg.