Report: Surge in Chinese investment overwhelms US regulators and raises risks of fraud 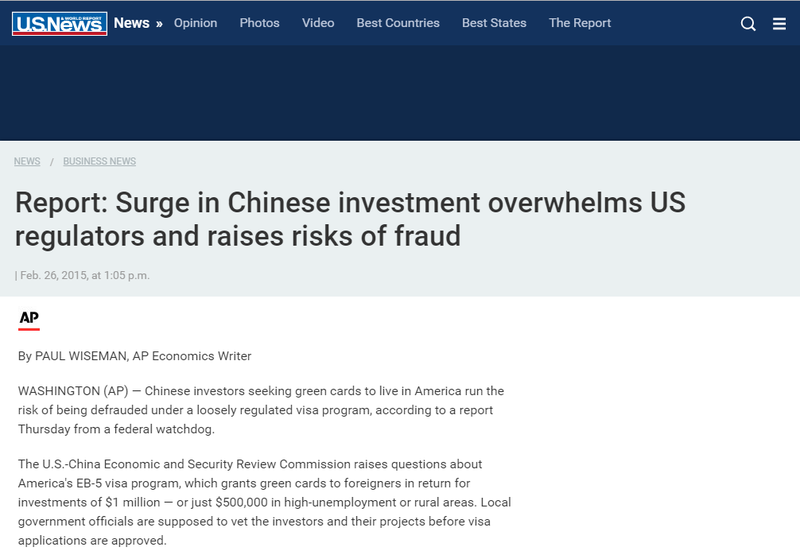 Chinese investors seeking green cards to live in America run the risk of being defrauded under a loosely regulated visa program, according to a report Thursday from a federal watchdog.

The U.S.-China Economic and Security Review Commission raises questions about America's EB-5 visa program, which grants green cards to foreigners in return for investments of $1 million — or just $500,000 in high-unemployment or rural areas. Local government officials are supposed to vet the investors and their projects before visa applications are approved.

"The program has been flooded by Chinese applicants," the report found. "Instances of fraud and lax regulation have cast doubt on the ability of local authorities to screen Chinese EB-5 investors properly."

The commission cites the case of a real estate developer indicted last year on charges of duping 290 Chinese investors into sinking money into a fraudulent $912 million hotel complex outside Chicago. In South Dakota, a state official committed suicide in 2013 after coming under investigation for mismanaging Chinese and South Korean EB-5 investment funds connected to a failed beef-packing plant.

Started 24 years ago, the EB-5 has only recently begun to attract intense interest in China, where investors and business owners are worried about a cooling economy and a crackdown on corruption. Many are also eager to take advantage of a strengthening U.S. economic recovery.

EB-5 investors are issued conditional green cards valid for two years. To gain permanent residency, they must submit proof before the green card expires that they have established a "commercial enterprise," invested the required amount of money and created jobs.

Many foreign investors seek help from 617 Immigrant Investor Regional Centers nationwide to identify projects that qualify for the visa program. The investors are often under the mistaken impression that the centers are sponsored by the government. In fact, although they need government approval to get the "regional center" designation, they are private, for-profit operations.

The Securities and Exchange Commission and the U.S. Citizenship and Immigration Services have jointly said they have no "view on the quality" of the investments the centers are promoting.

The commission report notes that local governments have "an incentive not to screen Chinese EB-5 investors too rigorously. They can fill an important gap by investing in impoverished areas that domestic investors avoid."

But the rules governing the visa program are so loose that even prosperous communities can be counted as areas of high unemployment, letting investors get a green card for investing $500,000 instead of $1 million.

"I've qualified things that are in the middle of Beverly Hills," Abigail Browning, who works on the EB-5 program for the California government, told commission researchers. "You'd think that wouldn't be a high unemployment area."

The United States issues 10,000 EB-5 visas annually. Each country is entitled to 7 percent, or 700; but the State Department has let China override the limits because other countries weren't using all their slots. Chinese citizens got 6,985 EB-5 visas in 2013, up from less than 2,500 in 2011. But last August, with China's share accounting for 85 percent of 2014 EB-5 visas, the State Department announced for the first time that the program would be closed to Chinese applicants until fiscal year 2015, which started in October.

The report was written by commission researchers Iacob Koch-Weser and Garland Ditz. They call for the EB-5 system to be scaled back or for the approval process to be improved.

The commission, created by Congress in 2000 to monitor the national security implications of the U.S.-China economic relationship, is publishing the report "to promote greater public understanding" but does not necessarily endorse its findings.