Tell us again about being lax 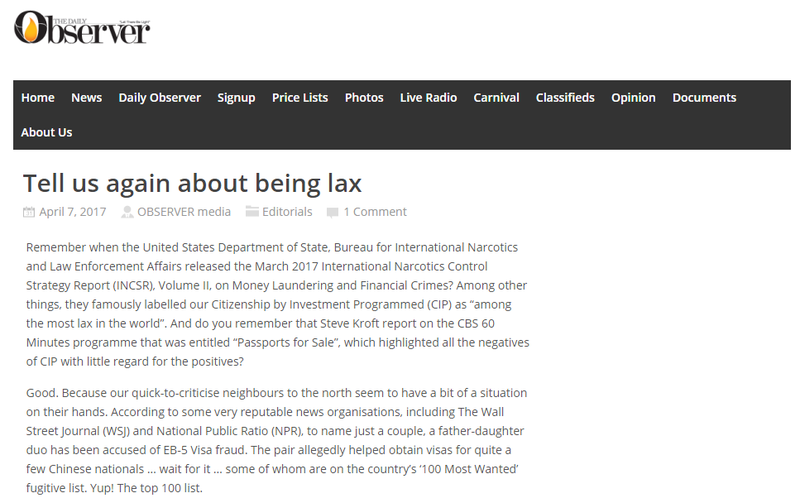 Remember when the United States Department of State, Bureau for International Narcotics and Law Enforcement Affairs released the March 2017 International Narcotics Control Strategy Report (INCSR), Volume II, on Money Laundering and Financial Crimes? Among other things, they famously labelled our Citizenship by Investment Programmed (CIP) as “among the most lax in the world”. And do you remember that Steve Kroft report on the CBS 60 Minutes programme that was entitled “Passports for Sale”, which highlighted all the negatives of CIP with little regard for the positives?

Good. Because our quick-to-criticise neighbours to the north seem to have a bit of a situation on their hands. According to some very reputable news organisations, including The Wall Street Journal (WSJ) and National Public Ratio (NPR), to name just a couple, a father-daughter duo has been accused of EB-5 Visa fraud. The pair allegedly helped obtain visas for quite a few Chinese nationals … wait for it … some of whom are on the country’s ‘100 Most Wanted’ fugitive list. Yup! The top 100 list.

According to NPR, “Federal authorities raided a Los Angeles-area business on Wednesday that the FBI suspects of orchestrating a $50 million visa fraud scheme. Filings in federal court allege that the California Investment Immigration Fund sought money from more than 100 Chinese investors, and in the process helped many of them to obtain US green cards through a visa program called EB-5.”

To get a better understanding of the EB-5 visa programme, we visited the US Citizenship and Immigration Services (USCIS) website, since they administer the programme. According to the website, “Under this program, entrepreneurs (and their spouses and unmarried children under 21) are eligible to apply for a green card (permanent residence) if they: Make the necessary investment in a commercial enterprise in the United States; and plan to create or preserve 10 permanent full-time jobs for qualified US workers.”

The plan was created in 1990 “to stimulate the US economy through job creation and capital investment by foreign investors. In 1992, Congress created the Immigrant Investor Program, also known as the Regional Canter Program. This sets aside EB-5 visas for participants who invest in commercial enterprises associated with regional centres approved by USCIS based on proposals for promoting economic growth.”

According to a report by the United States Government Accountability Office, “Congress created the EB-5 visa category to promote job creation and capital investment by immigrant investors in exchange for lawful permanent residency and a path to citizenship. Participants must invest either $500,000 or $1 million in a business that is to create at least 10 jobs.” The report to which we refer was published in September 2016 and entitled, “Immigrant Investor Program – Progress Made to Detect and Prevent Fraud, but Additional Actions Could Further Agency Efforts”.

Hmm!?! Why is this all sounding so familiar? We refer, of course, to the VIP (Visa by Investment Programme) and not the ‘100 Most Wanted’ fugitive list. By the way, the VIP moniker is our creation and not an official United States label. Trademark to follow.

In any case, according to the Los Angeles Times, “The suspects in the case are accused of collecting $50 million from scores of Chinese nationals, who were granted permission to live in the United States in exchange for investing the money in development projects that authorities say never occurred.” In the same report, the EB-5 visa programme was described as “a little-known type of immigration visa reserved for high-end investors that has been beset by poor oversight and claims of fraud.” The report also stated, “Some of the investors, for example, are on a Chinese government list of most-wanted fugitives, accused of bribery and other crimes, according to the affidavit.”

Someone needs to get onto the producers of 60 Minutes over at CBS and let them know there that the United States VIP could be the source of criminals gaining “lawful permanent residency and a path to citizenship”. And while our CIP is only a few years old, the EB-5 Visa programme is over 25 years old and still is subject to major fraud and obvious vetting issues.  What was that about being “among the most lax in the world”?

We could go on but instead, we will leave you with Matthew 7:5 (King James Version): “Thou hypocrite, first cast out the beam out of thine own eye; and then shalt thou see clearly to cast out the mote out of thy brother’s eye.” Amen!