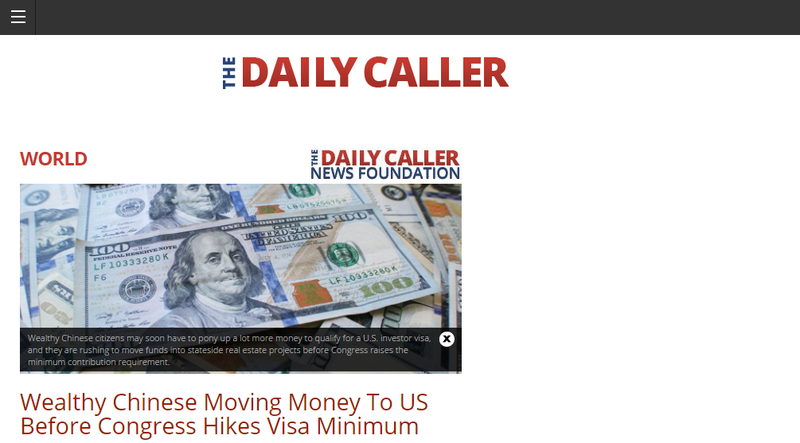 Wealthy Chinese citizens may soon have to pony up a lot more money to qualify for a U.S. investor visa, and they are rushing to move funds into stateside real estate projects before Congress raises the minimum contribution requirement.

Lawmakers are currently reviewing the investment standards of the EB-5 program, a special visa category that fast-tracks foreign investors for permanent resident status if they invest at least $1 million–or $500,000 for “targeted employment zones”–into job-creating businesses in the U.S.

The Department of Homeland Security has proposed increasing the standard minimum investment amount from $1 million to $1.8 million and the targeted employment area minimum from $500,000 to $1.35 million, which has some rich Chinese rushing to get their money into U.S. bank accounts, Bloomberg reported Sunday.

Many are resorting to borderline illegal tactics to get around capital controls imposed by the Chinese government. One favored method, Bloomberg reported, involves opening multiple overseas accounts or using friends’ accounts to make a series of smaller deposits below the $500,000 EB-5 minimum. Known as “smurfing,” the practice allows investors to skirt the Beijing-mandated exchange cap of $50,000 worth of Chinese yuan.

Investments from China make up the vast majority of the EB-5 program , which has come under fire in recent years as a way for rich Chinese to buy U.S. residency for themselves and their families.  The State Department says Chinese investors poured in $3.8 billion in the fiscal year that ended Sept. 30–approximately 85 percent of the EB-5 investment total, Bloomberg reported.

Supporters of the program say it is a vital tool for attracting foreign investment and creating domestic jobs, but it has also been susceptible to major fraud schemes. Last month, a Chicago-based real estate developer was sentenced to three years in federal prison for ripping off $160 million from Chinese EB-5 applicants who thought they were funding a legitimate hotel project near O’Hare International Airport, the Chicago Business Journal reported.