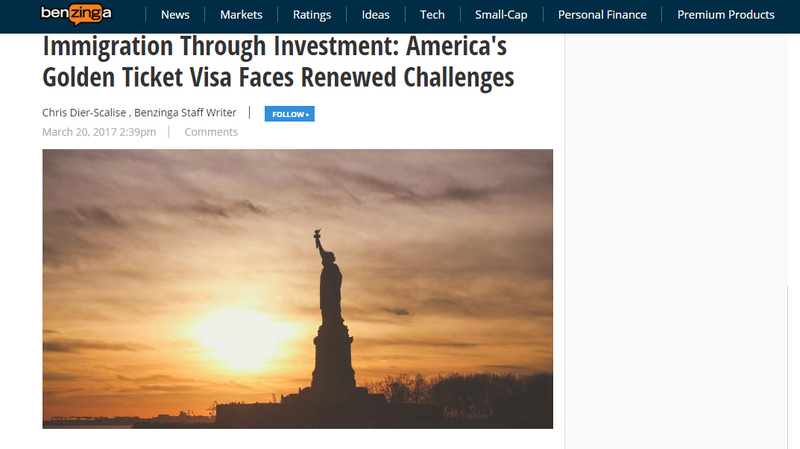 Immigration has been a major policy focal point during the first 50 days of the Trump administration. Despite the president’s hardline stance on the topic, he has remained silent on a prolonged immigration debate that is currently circulating through congress that has garnered cooperation from both sides of the aisle.

The debate over the program has been prolonged, with calls to reform or even end EB-5 since the application process was revised by U.S. Citizenship and Immigration Services in 2011 to encourage more applicants. The revisions worked, and the program has reached its 10,000-visa capacity every year since 2014.

Critics of the program, which include senators Chuck Grassley (R–IA) and Dianne Feinstein (D–CA) as well as representatives John Conyers (D–MI) and Bob Goodlatte (R–VA) among others, contend that the investment program is opaque, does not serve its intended purpose and effectively amounts to a price tag on visa citizenship that wealthy immigrants use to bypass many of the typical immigration vetting channels.

Supporters of the program, like senator Chuck Schumer (D–NY) and representative Jerrold Nadler (D–NY), point to successful examples of EB-5 funded projects such as redevelopment of the Brooklyn Navy Yard and housing developments in San Francisco’s Tenderloin district.

Enacted under the Immigration Act of 1990, the EB-5 program was intended to spur development and investment in U.S. businesses and projects by offering an accelerated path to obtaining a green card for foreign investors who contribute a loan of at least $1 million to projects that will create a minimum of 10 full-time jobs for American workers. The program includes added incentives through a discounted loan minimum of $500,000 when the investments are focused on rural or low employment areas.

However, in the 25 years since it was enacted, the program has been marred by instances of fraud, money laundering and the gerrymandering of census tracts in areas like New York City to allow investors visa eligibility at the discounted rate reserved underdeveloped communities.

The EB-5 program could potentially be a factor in a new real estate deal with direct ties to President Donald Trump.

Jared Kushner, the principal owner of real estate developer Kushner Companies as well as the son-in-law and adviser to Trump, is in talks to with Chinese firm Anbang Insurance Group for a $4 billion partnership in the Kushner Company-owned 666 Fifth Ave. The proposed partnership also includes a call for investors in the transaction, including potential EB-5 applicants.

Kushner himself has divested his stake in the property to other family members in the interest of avoiding conflicts of interest. However, other partners in the property include Vornado Realty Trust, which is also partnered with the Trump Organization on two of the company’s most valuable properties.

The current legislation for reforming the program, introduced by Feinstein and Grassley, calls for increased scrutiny on the origin of the investment funds, greater oversight of loan process, and an increase in the minimum investment amount.

The primary aim of these reforms is to combat the instances of gerrymandering as well as numerous cases of fraud perpetrated by EB-5 offices against applicants.

There is also a recent challenge by Republican legislators to end the program completely, citing concern that terrorists may use the EB-5 to gain easier access to the country by circumventing increasingly stringent U.S. immigration policies and vetting.

The EB-5 program was previously scheduled for renewal late in 2016, but was extended several times. The current deadline for renewal is set for April 28.