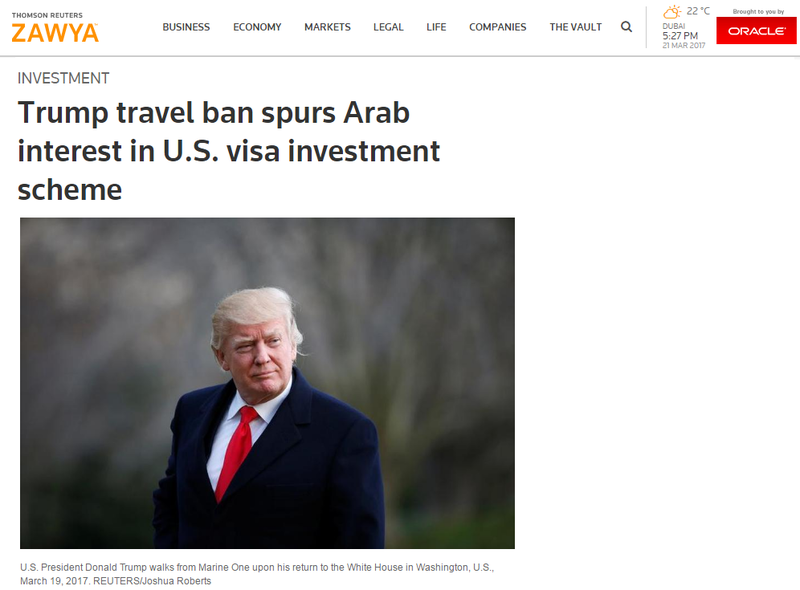 Since U.S. President Donald Trump was elected in January there has been a surge in the number of Arabs enquiring to be part of an investment programme offering the chance to earn American citizenship in return for a minimum cash injection of $500,000, according to a Dubai-based lawyer offering the scheme.

Trump on March 6 signed his second executive order barring citizens from Iran, Libya, Syria, Somalia, Sudan and Yemen from entering the United States for 90 days. While Iraq was part of the first order in January it was dropped from the second list. The move has divided opinion in the United States and has been subject to legal challenges from some federal judges.

The EB-5 visa for Immigrant Investors was created by the U.S. Immigration Act of 1990 as a way to spur foreign direct investment in projects in deprived or underfunded areas of the United States. By investing a minimum of $500,000 foreign nationals can obtain a green card and ultimately apply for full American citizenship.

“Our offices have received a greater number of inquiries and client enrolment since the commencement of the Trump presidency. Investors can see how immigration laws are shifting rapidly and are looking to finalise their options before any new rules take place,” Preeya Malik, managing director of Step America, a Dubai-based agency offering the EB-5 visa scheme, told Zawya in an email interview earlier this month.

Malik estimated around $35 million will be invested in the EB-5 program by residents from the United Arab Emirates and wider Gulf region this year, a rise of around 20 percent compared to 2016. While Malik’s client list was previously dominated by Indian expats living in the Gulf, she has seen a dramatic rise in the number of Arabs applying for the scheme.

“We have looked at our records and it is safe to say there has been about a 60 percent increase in the last month alone in client engagement and inquiries since the executive (travel ban) order was signed… The most interesting element though, is that there has been an almost 80 percent increase in Arab nationalities expressing interest and enrolling in the program since the executive order was signed,” she added.

While Malik did not reveal the exact number of Arab applications she said that it had been “more than dozens”. It normally takes around 13 to 17 months for applications to be approved by U.S. authorities.

The rush of interest is also due to the fact that Congress is due to review the scheme in April and it is expected to raise the minimum investment required from $500,000 to over $800,000.

“The most attractive element for the United States is the capital investment and job creation. For foreign investors, the most attractive aspect of the program is that it’s an expedited path in obtaining residency and ultimately citizenship and U.S. passport,” Malik said, adding that the Trump Organization itself has used the project to help fund some of its hotel developments.

Participation in such schemes has risen over the last few years, up from 1,369 approvals in 2010 to 7,632 last year, according to official data from the United States Citizenship and Immigration Services.

“We have even had a few Emirati enquiries, which we usually never get as there is really not a reason for them to want a second passport,” she said, adding that the firm had also seen enquiries from Syrians, Saudis and Iranians