What Trump travel ban may mean to EB5 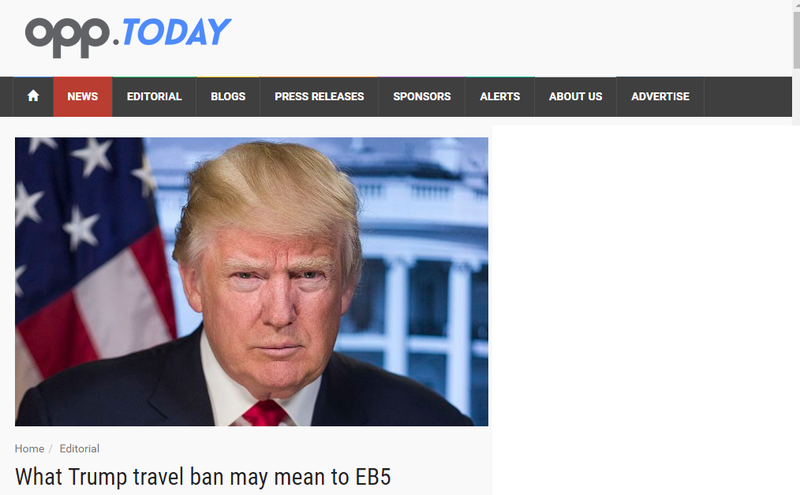 EB-5 participants must invest $1million in a project which creates at least 10 jobs or $500,000 in a rural or high-unemployment area.

Each year, 10,000 EB-5 visas are issued in the United States, with 90% being awarded to applicants from China. Congress is set to review the EB-5 program before it expires on 28 April. Proposals include a change in the minimum sum to be invested, possibly to $800,000 in high unemployment areas and $1.2million elsewhere, parameters for “target employment zone” to be defined by the Department of Homeland Security instead of states and more oversight to prevent abuse of the program.

It does not affect the Chinese, but leading Chinese international property website, Juwai.com, says, “Donald Trump has vowed to be tough on China, though, and made frequent mention of immigration policy and trade relations with China throughout his campaign, which has led some to expect a rollback on the United States’ EB-5 Investor Visa program.

“What’s interesting to note, however, is that real estate projects linked to Donald Trump’s family business have been major beneficiaries of the EB-5 program, according to Bloomberg.

“The 50-storey Trump Bay Street apartment project – a development built by Kushner Companies, which is run by Trump’s son-in-law Jared Kushner – has raised $50 million from EB-5 investments, with most of the money coming from Chinese investors.

“Nevertheless, while Donald Trump has moved to distance his family businesses from his job as the US President, we believe a Trump administration will at least look favourably on the program, or perhaps even extend it.”

Nuri Katz, President of Investment advisors, Apex Capital Partners, says, “Reading carefully the text of the executive order, any reasonable person versed in immigration matters and with just the slightest knowledge of due diligence procedures can clearly understand that this executive order does nothing to make America safer.

“As an American helping individuals obtain second citizenship, these barriers are disparaging. While temporary, it is divisive as it singles out a sect of people from what Trump calls the ‘Muslim majority countries’ and individuals with dual citizenships from these countries are banned as well.

“It is no wonder that, since Trump’s election win, the amount of calls coming into my office from Americans interested in securing a second passport in the Caribbean or permanent residency in Canada has increased exponentially. Americans are unsure about their futures and interested in their potential escape options.

“For over two decades, I’ve been working to help individuals with immigration and passport acquisition, so I am no stranger to the US immigration screening process. The current process takes years of interviews, tests and valid references. It is not easy to become an American or establish legitimate residency, but still foreigners choose to come to the US to achieve the American dream of freedom and success. So, I asked myself what was the purpose of signing an order like this? With no imminent threat, what does an order like this accomplish?

“After reviewing Trump’s order, it seems to me that the intended purpose of this disruption in travel and immigration is in an attempt to overhaul the American visa, immigration, and refugee system. What this order does is suspends entry from Muslim majority countries until the government is able to determine the “appropriate” new safety guidelines for US admission.

“Section 3(b) of the order could lead to a permanent ban on entry of people, including refugees, from the countries specified. Unfortunately, section 5(b) of the order makes another glaring and anti-Muslim statement by changing the refugee acceptance policy. Refugees are defined as those with a well-founded fear of persecution for reasons of race, religion, nationality, political opinion or membership in a particular social group.

“It seems looking at this section that Trump has decided to prioritize the acceptance of Christian refugees only. This is truly where the idea of the Muslim ban comes into play. The fact that Trump and his administration are now prioritizing religious immigration, in conjunction with getting rid of the Johnson Amendment, solidifies that his efforts to bring religion back into the core of American politics and society, all while keeping those of other faiths at a safe distance.

“What is additionally striking about this executive order is that it prevents the average person from entering our country under already strict vetting processes, yet it does not mention the United States own express pathway to citizenship: the EB-5 Investor Immigrant program.

“Most of the wealthy EB-5 investors come from China, a country not affected at all by the ban but certainly many come from the Middle East, including Iran. As long as investors can still come to this country on EB-5 visas and unfairly charge on a path to citizenship because of their wealth, this executive order will remain a clear and targeted discrimination against those in Muslim-majority countries who lacked the funds to buy their way in prior to the Trump administration.

“What Trump has done by building this invisible wall is spark a new American narrative. It seems he is less concerned with safety and more concerned with changing, and permanently limiting, immigrants of certain backgrounds from coming to America. I guess we’ll just have to watch and see what he does next as he continues on Season One of his Presidency.”

Juwai.com believes some changes are likely due to investment misallocation in the past, but these are unlikely to put off Chinese investors.

“Guidelines to channel project investment into underdeveloped regions, as well as a possible threshold increase have been mooted, but there is such massive demand from Chinese – especially the Chinese high net worth individuals (HNWIs) – that any changes done to the EB-5 will have little impact.

“So, despite the Trump victory rewriting the rulebooks of politics, it seems improbable that ‘The Donald’ will be making any major changes to the EB-5 program, and that’s further reason to expect a steady flow of Chinese enquiries for US properties to continue into the coming year.”