The Trouble with EB-5 and What’s Ahead 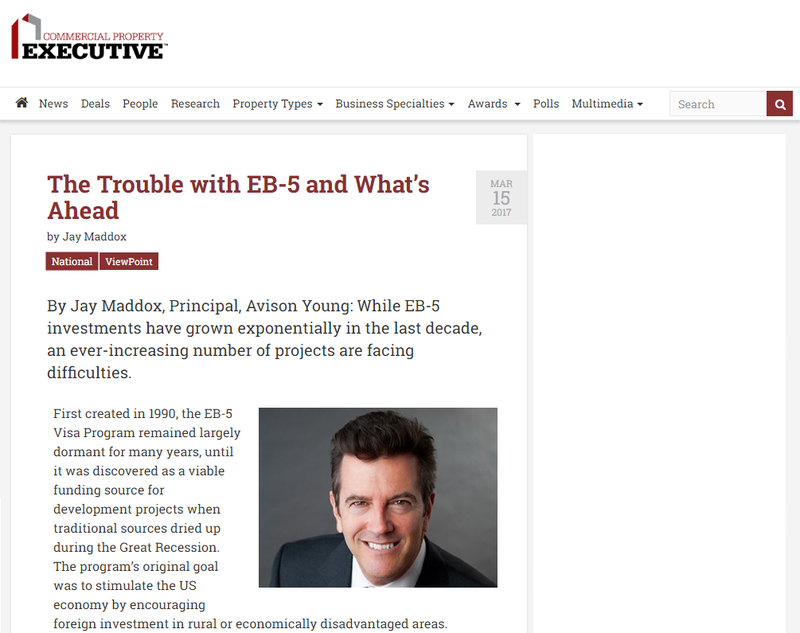 First created in 1990, the EB-5 Visa Program remained largely dormant for many years, until it was discovered as a viable funding source for development projects when traditional sources dried up during the Great Recession. The program’s original goal was to stimulate the US economy by encouraging foreign investment in rural or economically disadvantaged areas. Under the EB-5 program, individual foreign investors who contribute a minimum of $500,000 (or $1 million in some areas) to projects that create a minimum number of jobs per dollar invested are qualified to apply for permanent residence in the US.

While the EB-5 program is a good, well-intentioned platform, many EB-5 investments in commercial real estate projects have been poorly underwritten and conceived, exposing foreign investors to potentially catastrophic losses. And, there have been many abuses of the program, which should come as no surprise because the EB-5 investors are primarily concerned about obtaining the immigration benefits, rather than carefully evaluating the investment risks. As a consequence, we are seeing an ever-increasing number of EB-5 projects experiencing financial and operating difficulties. Most EB-5 investors are ill-prepared to address the complex challenges they will face if and when their projects get into trouble.

EB-5 fundings took off explosively in 2007, with more than $4 billion funded in a variety of projects and companies through 2016. As has been widely publicized, Chinese investors have been by far the heaviest participants. Much of this funding flowed into real estate projects that were expected to generate employment, such as hotels, elderly care facilities, manufacturing plants, and retail and office projects.

Despite the often lengthy lead times to raise EB-5 capital, they have been well worth the wait for developers because of the low cost, which has been a fraction of the double-digit returns normally required for equity investments in new construction projects.

As use of the EB-5 funding expanded, many projects were funded that were outside of the original program parameters, particularly as Chinese investors preferred to focus on larger, “trophy” projects in New York City, Los Angeles and Las Vegas. Default rates of EB-5-funded projects are now well in excess of those on CMBS and bank loans, and the volume has been increasing dramatically. The excessive default rates can be blamed on poor project underwriting—an inevitable consequence when investors are focused on the resident visa benefit rather than the project economics.

Most EB-5 investors are not financially sophisticated, face language barriers and have little or no knowledge of acceptable business practices. This opens them up to being targets for fraud and misappropriation of funds. Fraud has become widespread, as evidenced by the volume of formal complaints filed with the Securities & Exchange Commission.

EB-5 investors typically have limited default remedies if a project gets into trouble. Many EB-5 investment agreements do not address default situations, and worse, the senior lenders require very restrictive inter-creditor agreements that greatly limit investors’ ability to protect their interests.

What’s Ahead for EB-5

The EB-5 program was set to expire last year but has been extended to April 2017. While its future is uncertain under the new administration in Washington, the current discussion in Congress centers on increasing the minimum investment amount and implementing regulatory reforms. Meanwhile, the volume of distressed EB-5 projects is steadily increasing, and defaults are rising. If a project encounters difficulties, the EB-5 investors face not only the risk of a financial loss, but also the loss of their anticipated immigration benefit. This is especially true if the projected job creation does not occur due to a failed project. The stakes are very high for the EB-5 investor groups, and it pays to employ third party workout professionals who can have the specialized expertise necessary to tackle extremely thorny financial and immigration issues and achieve the best possible result.