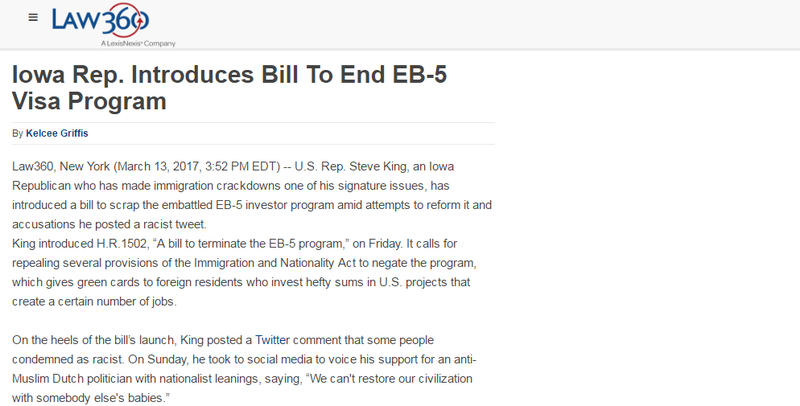 U.S. Rep. Steve King, an Iowa Republican who has made immigration crackdowns one of his signature issues, has introduced a bill to scrap the embattled EB-5 investor program amid attempts to reform it and accusations he posted a racist tweet.

King introduced H.R.1502, “A bill to terminate the EB-5 program,” on Friday. It calls for repealing several provisions of the Immigration and Nationality Act to negate the program, which gives green cards to foreign residents who invest hefty sums in U.S. projects that create a certain number of jobs.

On the heels of the bill’s launch, King posted a Twitter comment that some people condemned as racist. On Sunday, he took to social media to voice his support for an anti-Muslim Dutch politician with nationalist leanings, saying, “We can't restore our civilization with somebody else's babies.”

The comment referred to Geert Wilders, the founder of the Netherlands’ Party for Freedom, who has championed banning the Koran, among other measures. The comment drew swift criticism from political leaders including former Florida governor Jeb Bush and Chelsea Clinton. But it was praised by others, including a former KKK leader. King defended the comment on a CNN program Monday morning, media reports said.

In a statement Friday regarding his new bill, King issued a scathing criticism of the investor program, suggesting it opens the door to fraud and instability.

“Under the Obama administration’s unconstitutional and open immigration policy, applications for EB-5 visas suddenly skyrocketed, and now, there is an eight year waiting list. The result is they are selling access to citizenship and selling it cheap,” King said in the statement.

He said that the program’s “fraud and abuse” have been “disguised as popularity.”

Rep. Louie Gohmert, R-Texas, is listed as the only co-sponsor of the bill so far.

The bills aimed at ditching the program come amid other proposed reforms that would keep the program alive.

The U.S. Department of Homeland Security rolled out a rule one week before the end of the Obama administration aimed at updating the EB-5 program’s parameters. The updates would raise the required investment amounts and designate certain geographical areas where immigrants are allowed to contribute less money, among other tweaks.

Right now, the EB-5 program provides green cards to foreign residents who invest at least $1 million in the U.S., or $500,000 if the investment is in a rural area or place with high unemployment, known as a "targeted employment area."

Under the proposed regulation, the DHS proposed increasing the minimum investment amount from $1 million to $1.8 million, and from $500,000 to $1.35 million for those who invest in one of the targeted areas.

The proposed updates come after attempts to reform the EB-5 program repeatedly stalled in Congress, despite a recent rash of fraud lawsuits over the program from the U.S. Securities and Exchange Commission, including a high-profile case involving a Vermont ski resort.