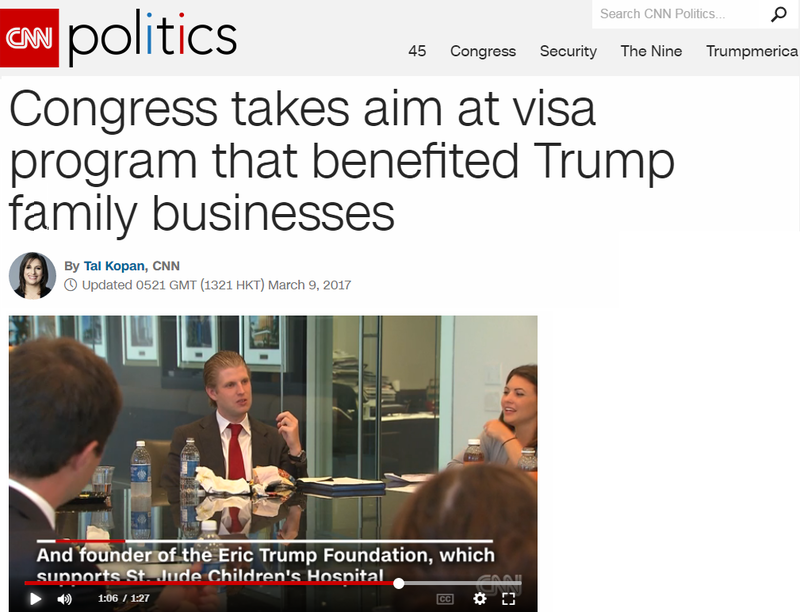 Lawmakers from both sides of the aisle signaled Wednesday they've had enough with a visa program as it currently stands -- a program that has been key to at least one Trump family business venture.

At issue is the EB-5 immigrant investment program, which allows foreign investors to pump money into US projects that create jobs and then apply for visas to immigrate to the US.

In a rare issue that unites lawmakers on the left and right, members of Congress have decried the program for essentially selling citizenship to wealthy foreigners -- many of whom are based in China -- although they acknowledge it does have value as a way to spur investment in the US and job growth. EB-5 recipients are eligible to apply for green cards, which could allow them to eventually become US citizens.

It is also an investment program that businesses connected to President Donald Trump and his family have made use of to fund major property developments. Though the White House has not weighed in on the future of the program, a key Democrat at the hearing called for more oversight to ensure the Trump administration's participation would be unaffected.

The EB-5 program is set to expire at the end of April, when government funding runs out. Despite efforts at reform for years, lawmakers have extended the program in continuing resolutions funding the government.

That may no longer happen, lawmakers signaled at a House Judiciary Committee hearing Wednesday morning, as both House and Senate leaders spoke of the need of a major overhaul of the EB-5 program.

"The days of last-minute extensions and continuing resolutions are over. Let me repeat that: No more extensions in CRs," said Wisconsin Republican Rep. Jim Sensenbrenner, who chairs the Subcommittee on Immigration and Border Security.

"I must reiterate to achieve the necessary reforms to the EB5 programs, there is no substitute to a meaningful legislative solution, and absent significant reform, either regulatory or legislative, I will not be able to support continued authorization of this program," said Rep. John Conyers, the House Judiciary Committee's top Democrat.

The program has been a boon to real estate developers, including Trump-branded properties, according to published reports and the companies involved.

A project by the family company of Trump's son-in-law and top White House adviser, Jared Kushner, called Trump Bay Street in Jersey City, New Jersey, raised $50 million, or one-quarter of its funding, from EB-5 investments, a company representative confirmed. Kushner Companies has not otherwise made us of EB-5.

A Trump Hotel project under the sub-brand Scion in Dallas is also drawing on foreign investments, according to its local developer, reports Bloomberg and New York Magazine. It was not clear if that money was through the EB-5 program. The developer was unable to comment immediately.

The Trump Organization did not respond to a request for comment on its use of EB-5.

Democratic Rep. Zoe Lofgren, Sensenbrenner's counterpart on the relevant subcommittee, brought up the reports of Kushner's projects using EB-5 money, and whether the White House would be able to act without conflict on the subject.

"I think some research ought to be done on that, Mr. Chairman, to make sure that we're getting unbiased participation by the executive," she said.

The White House did not immediately respond to a request for comment on where it stands, but a spokesman pointed out that Trump has separated himself from the Trump Organization and associated entities. The Department of Homeland Security also did not respond to an inquiry about whether it would continue to pursue the reforms.

Few lawmakers at the hearing argued the program should be done away with entirely. The purpose of the hearing was to evaluate proposed changes to the program by the Department of Homeland Security, which are designed to address criticisms of the program.

Some of the changes include raising the threshold of money required to benefit from the program, from $500,000 to $1.35 million for the minimum level, and to tighten the requirements to qualify as a "Targeted Employment Area" -- to ensure that such designations are reserved for areas that actually would benefit high unemployment areas.

A Government Accountability Office report has found the program is susceptible to fraud, and found that the vast majority of investors combine unemployment data from multiple census areas to qualify for TEA, rather than a single census area affected by the project.

Lawmakers spoke frequently of so-called "gerrymandering" to qualify, where projects pick and choose census areas to seem to be benefiting areas in need, like rural or impoverished communities, but actually develop in wealthy urban centers.

Two senators even made a rare trip across the Capitol to testify before their House colleagues to tout their bipartisan work on the subject.

"The EB-5 program I once championed seems like a distant memory," said Sen. Patrick Leahy, a former chaiman of the Senate Judiciary Committee. "The program was designed to bring jobs to underserved rural and urban communities ... But the program that exists today has strayed from these goals. It is a magnet for fraud."

Senate Judiciary Committee Chairman Chuck Grassley joined Leahy in touting the reform bill that the two of them have worked on.

"This is a program that's been around for a long time, but we shouldn't have a president making decisions about that program when he himself stands to benefit from the investments that these people are making because, once again, what this program is all about is telling people you're going to get residency in the United States if you bring a lot of money along with you and invest it in American businesses," Painter told CNN.

"The President should not be the owner of some of those businesses that are going to be getting that money if he's administering that program, or if his administration is," he added.