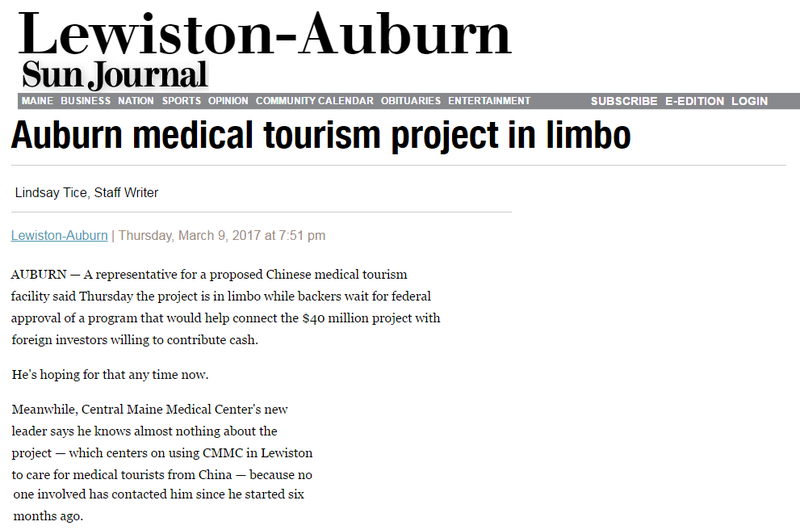 A representative for a proposed Chinese medical tourism facility said Thursday the project is in limbo while backers wait for federal approval of a program that would help connect the $40 million project with foreign investors willing to contribute cash.

He's hoping for that any time now.

Meanwhile, Central Maine Medical Center's new leader says he knows almost nothing about the project — which centers on using CMMC in Lewiston to care for medical tourists from China — because no one involved has contacted him since he started six months ago.

"It's not a project, from our perspective," said CMMC spokeswoman Ericka Dodge, adding, "To say that we will be or won't be involved is kind of like grasping at a cloud. There's nothing there."

The project was announced in July 2015, in a standing room-only signing ceremony at Auburn Hall. It calls for turning the former Lunn and Sweet Shoe Factory on Minot Avenue into a 5-star resort catering to rich Chinese patients seeking American medical treatments at CMMC. At the time, representatives for Miracle Enterprise — the Maine arm of Beijing-based Guo Tou Sheng Tong Investment Co. and the project's backer — said the resort could serve 5,000 people a year.

It was originally expected to be open for business and ready for patients this year, but there have been delays. The biggest delay: finding investors.

The Maine Department of Economic and Community Development plans to become a federally approved EB-5 regional center, which would help connect foreign investors to both this project and others in Maine that need money. Under the EB-5 program, those foreign investors can obtain visas and, eventually, green cards if they invest $1 million within the United States. They only have to invest $500,000 if the project is in a rural region or an area with high unemployment.

U.S. Citizenship and Immigration Services must approve all regional centers, but those approvals are taking months, if not longer. In November, DECD Commissioner George Gervais said he expected to hear "any day now." The department is still waiting.

As Miracle Enterprise waits, CMMC is focusing on other things "until and unless there's something there," Dodge said. "But right now, there isn't anything there."

That's a change for the hospital. Last summer, Peter Chalke, then the CEO of CMMC parent Central Maine Healthcare, said he'd been meeting with people from Miracle Enterprise.

"There is still strong interest in this project," Dodge said in July. "Considering this is a first-of-its-kind endeavor and the magnitude of the project, things are moving along quite well."

However, Chalke retired last fall. Jeff Brickman took over as CEO in September, and he said Thursday that no one from Miracle Enterprise has approached him about the project.

"As of right now there isn't any information in which to make a decision," Dodge said. "Jeff doesn't really feel like he can comment on it until he has information or discussions or just something other than what he's read about in the news. It really was conversation that involved his predecessor. Since he's been here, it's been quiet."

A representative for Miracle Enterprise agreed that no one has reached out to Brickman. He said they held off because they're still waiting for the regional center approval and because they knew CMMC was going through a transition.

He said he's sure Miracle Enterprise Chairwoman Shi Qi will want to meet with Brickman the next time she's in Maine, if he's willing.

Brickman said he would look forward to it.

"In light of the changing landscape of health care, we are continuing to assess where we are with new initiatives," Dodge said. "We are always open to exploring innovative ways to produce high-quality care to those who need it."

The 168,000-square-foot former shoe factory is empty and has been repeatedly burglarized. Miracle Enterprise recently spent $50,000 to secure the building, install lights, put in a security system and remove highly combustible chemicals that were left behind by a cleaner it had hired.