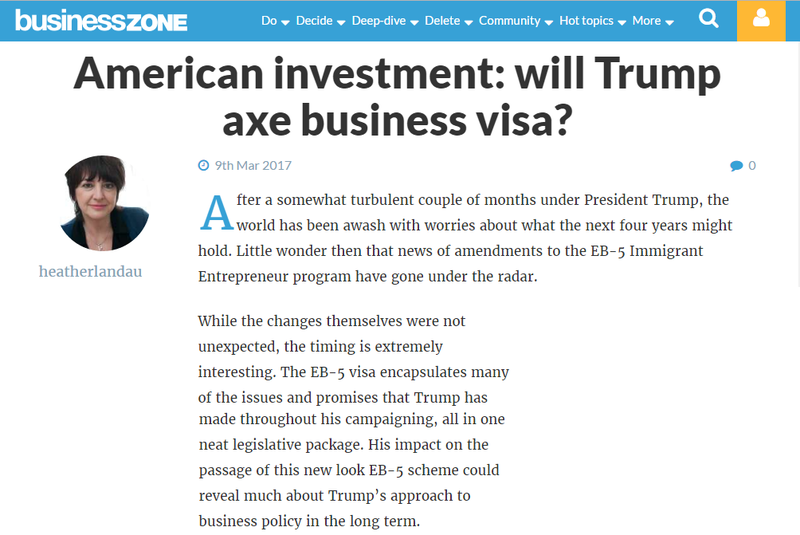 After a somewhat turbulent couple of months under President Trump, the world has been awash with worries about what the next four years might hold. Little wonder then that news of amendments to the EB-5 Immigrant Entrepreneur program have gone under the radar.

While the changes themselves were not unexpected, the timing is extremely interesting. The EB-5 visa encapsulates many of the issues and promises that Trump has made throughout his campaigning, all in one neat legislative package. His impact on the passage of this new look EB-5 scheme could reveal much about Trump’s approach to business policy in the long term.

The EB-5 Immigrant Investor program was introduced as one of a raft of changes contained in the 1990 Immigration Act. As part of George H. W. Bush’s stimulus package, the EB-5 program was designed to seek foreign investment in an age of increasing globalisation. Foreign investors could contribute $500,000 to an eligible U.S. business scheme in exchange for first temporary, and later permanent residency. Sponsored by Democrat stalwart Ted Kennedy, it has been variously championed and critiqued by both parties, a rarity in American politics.

In 1993 this was extended through the Investor Pilot Program. This allowed investment in existing business, and created what are known as Regional Centres: regional hubs which source and administer investment opportunities. These centres could corral together multiple investors for larger schemes, providing administrative support. This would theoretically create jobs en masse across the country, while providing a route to permanent citizenship for investors. In a less immigration conscious age, this seemed a more than fair trade-off.

The EB-5 scheme has not had the smoothest ride, however. Regulations introduced in the late 1990s to combat fraud led to a significant drop in applications; the legislation was completely overhauled a few years later to revitalise the scheme. Having been debated several times over the years, Obama’s Congress opted to renew the scheme three times, though the length of those decreased with each renewal. Now it seems the time has finally come to amend the visa.

The new proposals by the Department of Homeland Security represent the biggest shake-up of the scheme since the 90s. The requisite investment for EB-5 eligibility will be adjusted for inflation, potentially shooting up from $500k to $1.35 million, or $1.85m outside of high unemployment TEA areas. Where individuals and states could sometimes edge around these TEA requirements by massaging census tract data, this will also be targeted, with states’ ability to designate high unemployment zones completely devolved to the USCIS.

Although the most determined investors are unlikely to be deterred, this would seem to be a calculated move to reduce EB-5 numbers. A rise in minimum investment was anticipated, but most expected it to be closer to $800,000. The EB-5 has always been targeted at wealthy businesspeople, but the jump is a major one, and arguably not proportional to current or historical fluctuations in currency conversion. An investor now may end up paying more to attain $1.35m than an equivalent investor in 1990, all thanks to the use of the CPI.

That said, there are also changes designed to expedite the process for new applicants. A priority date retention clause, common in other areas of visa law, will let amended or resubmitted applications resume from their original submissions date. This will save some applicants from having to apply all over again, saving years on the current green card process. Investors are also no longer required to take an ‘active management role’ in their project. They can instead adopt the more realistic position of passive but interested observers.

The key question is whether these changes will actually be enforced. The changing of the guard, not just in terms of the President but also his cabinet, comes at a critical juncture. While Congress will have enough to deal with over the next few months, this is a big test. The idea of simultaneously cutting immigration and dealing a blow to China (according to the WSJ, 80% of EB-5 visas went to Chinese nationals in 2015) seems too perfect for Trump to pass up.

It’s true that Trump has made reducing immigration - and irritating China - keystone policies on the campaign trail. And it would not be the first time a politician went to excessive lengths to ensure improvement in raw figures. If amending or cutting the EB-5 program meant reducing annual immigration by a few thousand, that might be seen as worth the economic cost.

However, Trump was also elected as a pragmatic businessman who will make decisions that are best for the economy. While growth has picked up over Obama’s administration, the massive amount of spending on infrastructure and other projects promised by Trump will require new sources of revenue. Projects in California, Florida and Nevada have been widely praised over the past year, while investors have never been more confident. Applications nearly met the 10,000 annual cap in 2015, and its popularity continues to grow across Asia in particular.

While immigration is an issue for Trump, there are more pressing concerns than EB-5 visas. A Center for Immigration Studies report found that E-1 and E-2 visas for temporary residency have led to four times as many successful applications, with a significant number gaining citizenship. Most conclusively, Trump didn’t seem to have any problem with the scheme when he used it himself. The family of his son-in-law and advisor Jared Kushner runs one of his hotels, for which they sourced $50 million in EB-5 investment.

There is a chance then that the scheme will continue unabated. But it’s equally true that pre-election Donald Trump was completely impossible to predict. It remains to be seen whether President Trump settles into the role, or indeed which duties and areas of lawmaking he delegates. The decision to axe the EB-5 scheme might not fit his decision making thus far, but he might not be the one to make it.