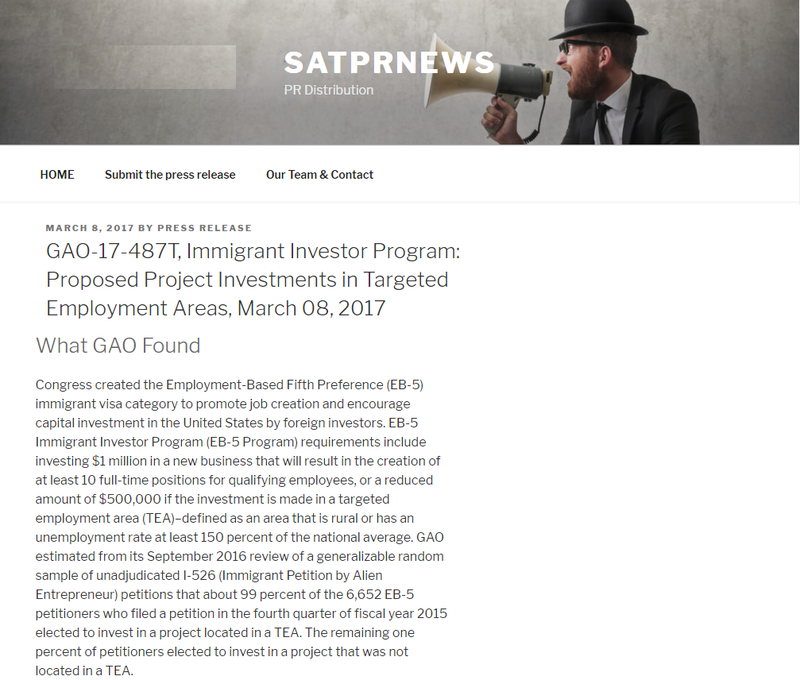 Congress created the Employment-Based Fifth Preference (EB-5) immigrant visa category to promote job creation and encourage capital investment in the United States by foreign investors. EB-5 Immigrant Investor Program (EB-5 Program) requirements include investing $1 million in a new business that will result in the creation of at least 10 full-time positions for qualifying employees, or a reduced amount of $500,000 if the investment is made in a targeted employment area (TEA)–defined as an area that is rural or has an unemployment rate at least 150 percent of the national average. GAO estimated from its September 2016 review of a generalizable random sample of unadjudicated I-526 (Immigrant Petition by Alien Entrepreneur) petitions that about 99 percent of the 6,652 EB-5 petitioners who filed a petition in the fourth quarter of fiscal year 2015 elected to invest in a project located in a TEA. The remaining one percent of petitioners elected to invest in a project that was not located in a TEA.

For petitioners from the fourth quarter of fiscal year 2015 who elected to invest in a TEA, GAO estimated in September 2016 that about 74 percent invested or planned to invest in various types of real estate projects including mixed use, hotels and resorts, commercial, and residential developments; while the remaining petitioners invested or planned to invest in projects such as infrastructure projects or transportation, restaurants, medical, and education facility projects. Further, EB-5 investment in projects located in a TEA was generally less than non-EB-5 investment by other foreign or U.S. investors. GAO estimated that the median percentage of total potential EB-5 investment was 29 percent of the total estimated project cost, and the estimated mean percentage was 40 percent.

Why GAO Did This Study

About 10,000 EB-5 visas per fiscal year are made available to qualified immigrant investors and their families seeking to immigrate to the United States through the EB-5 Program. Prospective program participants submit petitions to the Department of Homeland Security’s U.S. Citizenship and Immigration Services for adjudication, along with supporting materials. This statement provides information regarding the proportion of petitioners who did or did not elect to invest in a rural or high unemployment TEA; the proportion of petitioners basing a TEA on the unemployment rate for various types of geographic areas; and the types of petitioners’ TEA projects and EB-5 investment as a proportion of total project investment.