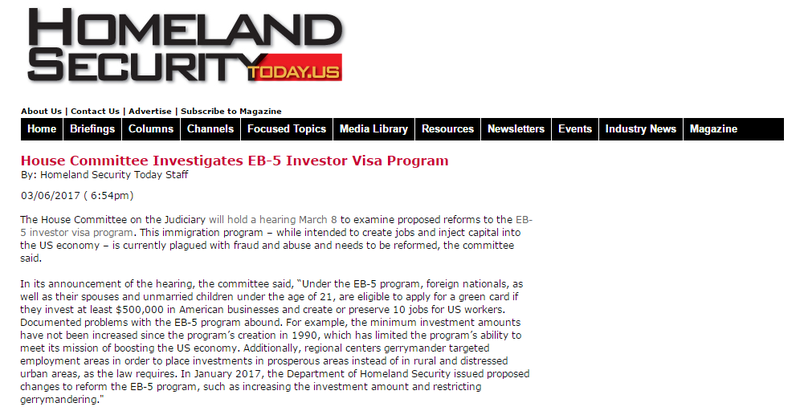 The House Committee on the Judiciary will hold a hearing March 8 to examine proposed reforms to the EB-5 investor visa program. This immigration program – while intended to create jobs and inject capital into the US economy – is currently plagued with fraud and abuse and needs to be reformed, the committee said.

In its announcement of the hearing, the committee said, “Under the EB-5 program, foreign nationals, as well as their spouses and unmarried children under the age of 21, are eligible to apply for a green card if they invest at least $500,000 in American businesses and create or preserve 10 jobs for US workers. Documented problems with the EB-5 program abound. For example, the minimum investment amounts have not been increased since the program’s creation in 1990, which has limited the program’s ability to meet its mission of boosting the US economy. Additionally, regional centers gerrymander targeted employment areas in order to place investments in prosperous areas instead of in rural and distressed urban areas, as the law requires. In January 2017, the Department of Homeland Security issued proposed changes to reform the EB-5 program, such as increasing the investment amount and restricting gerrymandering."

Committee Chairman Bob Goodlatte (R-VA) said, “While I support the overall goal of the EB-5 investor visa program, it is currently riddled with fraud and abuse and has strayed away from the program Congress envisioned when it created the program decades ago. The facts make it clear that this program is in desperate need of reform.”

He said, “The Department of Homeland Security has proposed commonsense reforms that increase the investment amount and curtail gerrymandering in the EB-5 program. These proposals would help ensure that EB-5 investment funds are directed to distressed urban and rural communities that need them the most. At this week’s hearing, the House Judiciary Committee will examine DHS’s proposed changes to strengthen the integrity of this immigration program so that it benefits the US economy.”