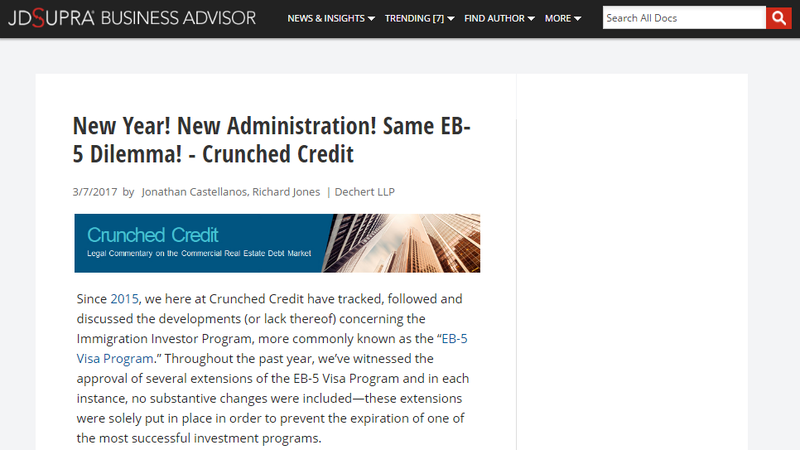 Since 2015, we here at Crunched Credit have tracked, followed and discussed the developments (or lack thereof) concerning the Immigration Investor Program, more commonly known as the “EB-5 Visa Program.” Throughout the past year, we’ve witnessed the approval of several extensions of the EB-5 Visa Program and in each instance, no substantive changes were included—these extensions were solely put in place in order to prevent the expiration of one of the most successful investment programs.

Currently, the EB-5 Visa Program is set to expire on April 28, 2017, which has once again caused members of Congress and the federal government to reinitiate the conversation on whether or not to once again extend the program temporarily (with or without any substantive revisions), make the program permanent (with or without any substantive revisions) or to let the program terminate naturally per its terms on April 28, 2017. Given that the EB-5 Visa Program has generated billions of dollars of investments, it is no surprise that many industry leaders, representatives of Congress and the federal government are keen on keeping this program alive—though, as discussed below and in various previous posts here on Crunched Credit, there are voices calling for its reformation and/or termination.

On January 13, 2017, the Department of Homeland Security (the “DHS”) published a summary of proposed rules that would make certain revisions to the EB-5 Visa Program, which would not only modernize the program, but also, would address some of the concerns of critics. Since the memorandum was issued by the DHS during the Obama administration, it is now up to the current administration to decide which, if any, of these proposed changes should be implemented and enforced. In any event, here are a few of the major changes the DHS has proposed:

The Department is currently accepting public comment on the proposed rules until April 11, 2017—which is approximately two weeks before the program is currently set to expire.

Will the program be extended? Will the new proposed rule be adopted? The Obama administration, many members of Congress and a wide swath of industry voices have previously indicated sympathy for the program and the new proposed rule. Where is the Trump administration? Not easy to tell, but the drumbeat of the anti-immigrant narrative is not comforting is it?   While many support the program, many other important voices are calling for its complete termination. On January 24, 2017, Representatives Chuck Grassley (R-Iowa) and Dianne Feinstein (D-California) introduced legislation to eliminate the EB-5 visa program and to reallocate the employment creation visas to the other employment-based visa classifications. In a joint press release, they said, “the program lacks a reliable or verifiable way to measure job creation. Furthermore, many of the wealthiest areas in America have been inaccurately designated as ‘high-unemployment’ in order to allow investors to obtain a green card for the smaller $500,000 investment.” So what happens if it goes away? On a going forward basis, the impact of the elimination of the program is clear. We get less well-heeled foreigners investing modest amounts of money in the country in exchange for a green card. Is that good policy or bad? The debate will go on. How about existing investments? Although the proposed legislation fails to discuss how the program’s termination will affect current investors participating in the program, it is likely that those investors who have filed their Form I-526 petitions prior to the program’s termination date will be grandfathered in and have their applications adjudicated—though please note that it is highly unlikely that the EB-5 Visa program will be terminated.

Look, we don’t think this is going away and if one weighs chattering class opinion it would appear that the weight of that opinion is that it will not go away. But stand by. In this administration where so little is clear, the progress of this debate is very hard to predict.

Although we are unsure what changes, if any, to the EB-5 Visa Program will occur prior to April 28, 2017, one thing is for certain: we look forward to following the EB-5 discussions in the next couple of months and will provide continued updates throughout.