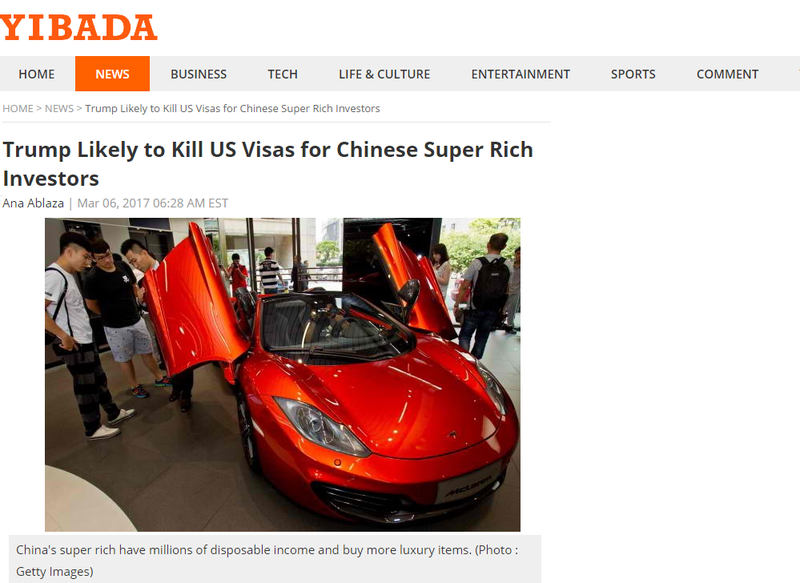 The new American President Donald Trump wants to limit the migration of China's super rich to the U.S., specifically the granting of the so-called "golden visa" or the EB-5 visa.

The EB-5 is the ticket for most wealthy Chinese super rich to invest in the U.S. Many American legislators want to leave it alone, but Trump is taking a different stance.

Nuri Katz, head of financial services firm Apex Capital Partners, said, "As such, I do not think that Trump will initiate any changes to the EB-5."

"Having said that, many other individuals, including many congressmen and senators do want to change or scrap the program entirely, so that may happen despite what Trump may think or want," he added.

The EB-5 visa is given to individuals who have invested $1 million in the U.S. and will provide work for at least 10 American workers. It was ratified by the Congress in 1990.

Total investments have amounted to $13 billion since 2008, which have created thousands of jobs for Americans.

With the upcoming revisions to the visa, many Chinese businessmen are looking for opportunities elsewhere, namely, Canada, Australia and the United Kingdom. There is an increase in Chinese investments in the Caribbean.

"As we see the EB-5 program processing times going up, we see more interest in the citizenship by investment programs in the Caribbean. We expect this trend to continue to grow," Katz said.

Based on the annual report released by consultants from Capgemini, wealthy individuals from China and Japan are getting richer. Their wealth is growing faster than their American counterparts.

The report stated that the U.S. still is home to high net worth individuals at $4.5 million. Japan is second, with $2.7 million. China came fourth, with just over $1 million.

China's super-rich grew the fastest at 16 percent from 2015.

You contradict yourself in this article. The title suggests that Trump wants to kill the EB-5 Program. The opening sentence to your article then states that Trump wants to "limit the migration of China's super rich to the U.S." though you cite no basis for this statement. Three lines down, you quote Nuri Katz as saying that Trump is unlikely to initiate any changes to the EB-5.