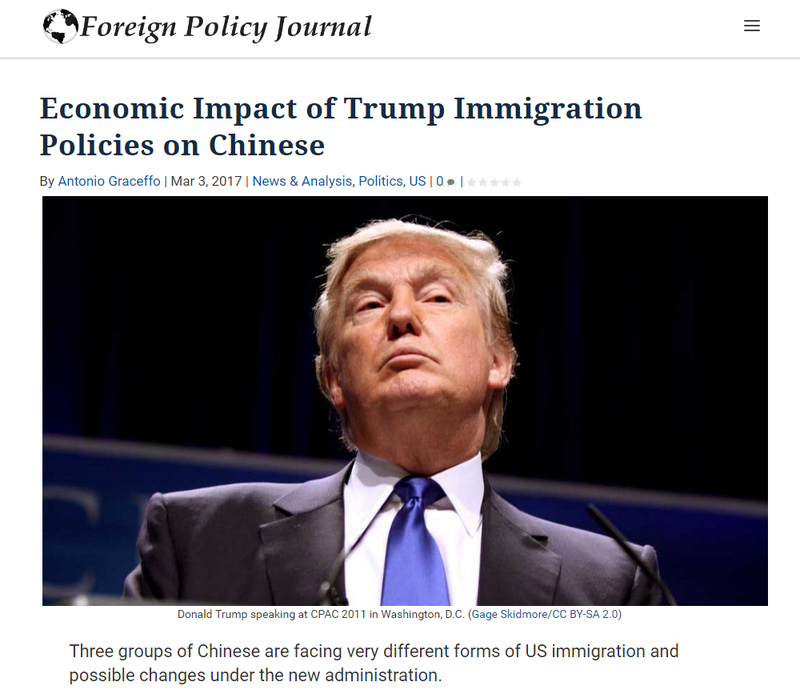 One of Trump’s main campaign promises was to radically restrict immigration. At the time many pundits and commentators dismissed this as campaign rhetoric. However, it seems that this is one promise that Trump intends to make good on.

The Trump administration has already attempted to ban immigration from seven Muslim countries, and DW has now reported that he has targeted over 11 million undocumented immigrants for forced deportation. The H1B visa for highly skilled workers may be overhauled or even abolished. According to Max Bearak of the Washington Post, Trump feels that the programs brings cheap labor and is open to “widespread abuse”.

The H1B visas are widely used by the IT, engineering, and other high tech industries in order to attract foreign talent to work in US firms. Paige Tanner of The Market Realist reported that US companies such as Apple, Google, and Intel (INTC) would be hardest hit, as between 17% and 38% of the work force at American technology firms is Asian.

Chinese graduates hoping to go to the US under this program may no longer be able to. Additionally, economists believe that losing all of those skilled workers will have a negative impact on the US and take away the US competitive edge in the technology sector.

While ending the H1B visa may have some impact on the economy, the Chinese English language news outlet Juwai reports that the visa with the most direct impact is the EB-5 investment visa, which is favored by the Chinese. Juwai explains that under this program foreigners investing $1 million or as little as $500,000 in an economically depressed area and creating 10 or more full-time jobs can remain in the US with a Green Card. This visa has been a major source of funding for various construction projects, such as Brooklyn’s Atlantic Yards, as well a small North Dakota factory that makes biodegradable food containers.

According to The Guardian reporters Sam Thielman and Mona Chalabi, Trump’s new tower in Jersey City known as Trump Bay street, as well as a project led by President Trump’s son-in-law have received considerable financing through the program. They estimate that approximately $50 million of the Bay Street funding has come from ChineseEB-5 visa holders. Forbes Magazine estimated that the EB-5 visa has been responsible for $8.7 billion worth of investment in the US since 2012.

Forbes Magazine reports that over 90% of Eb-5 applicants are Chinese. The real estate news source The Real Deal implied that demand for the visa usually goes up when the Chinese economy turns south, as investors are keen to get their money out of China and into dollars. According to CNN Money, the program is so popular among Chinese that in the government actually ran out of EB-5 visas in 2014. This surge in demand came in spite of increased regulations regarding financial disclosure.

With Trump’s tightening of immigration laws, many investors are wary about investing in the US until they know whether the EB-5 will remain in place. As buying property is one of the quickest and easiest ways to invest a million dollars in the US, restrictions on the EB-5 visa could negatively impact the US real-estate market.

Forbes Magazine’s Kenneth Rapoza reported that Trump opponents speculate that while the president may order mass deportations of undocumented immigrants and crackdown on the H1B visas, he will not restrict the EB-5 visa because the program provides much needed investment capital, which helps the US economy.

Forbes journalist Ellen Sheng reported that the EB-5 program may soon be altered. In early January, the Department of Homeland Security suggested increasing the investment minimum to $1.35 million. The program will be up for renewal on April 28, 2017, and as of now, it remains unclear if the investment limits will be increased or if the program will be renewed at all.

While debate rages in the US about illegal aliens, foreign H1visa experts and Chinese EB-5 investor visas, the US edition of the China Daily reports that one of the fastest growing Chinese demographics in the US is Chinese pensioners. The Chinese government has even made it easier for these people to collect their Chinese pensions while living abroad. Adam Hartung of Forbes Magazine felt that not enough attention was being paid to this group who will add to an already ageing US population and potentially become a burden on the US social system. Hartung stated that under customary visa conditions, people lacking the ability to work would not be admitted into the country and that accepting this many elderly could be a disaster economically.

In short, three groups of Chinese are facing very different forms of US immigration and possible changes under the new administration. Chinese foreign experts in the IT industry are afraid of losing their visa privileges. In contrast, EB-5 visa holders are probably protected by Donald Trump because of his own personal interest in the real-estate industry, and the US receiving investment dollars in general, but the privilege of coming to the US may wind up increasing in price dramatically. The final group, Chinese pensioners are quietly increasing in number and could become a further drain on US social security which is already threatened by America’s own ageing crisis.