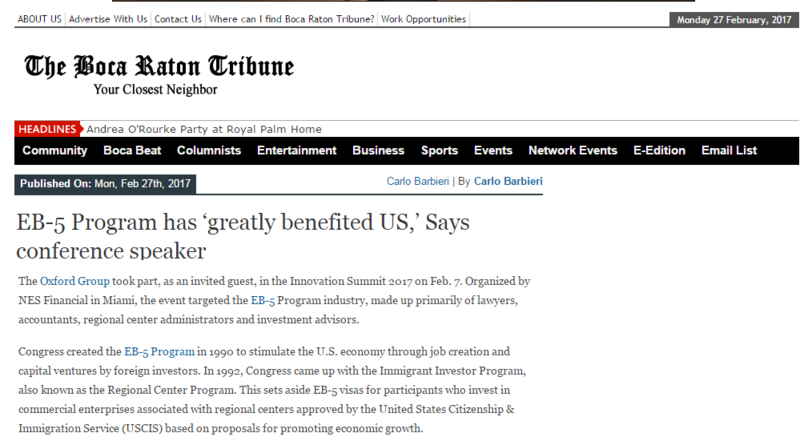 The Oxford Group took part, as an invited guest, in the Innovation Summit 2017 on Feb. 7. Organized by NES Financial in Miami, the event targeted the EB-5 Program industry, made up primarily of lawyers, accountants, regional center administrators and investment advisors.

Congress created the EB-5 Program in 1990 to stimulate the U.S. economy through job creation and capital ventures by foreign investors. In 1992, Congress came up with the Immigrant Investor Program, also known as the Regional Center Program. This sets aside EB-5 visas for participants who invest in commercial enterprises associated with regional centers approved by the United States Citizenship & Immigration Service (USCIS) based on proposals for promoting economic growth.

In the estimation of León Rodríguez, former USCIS director and speaker at the summit, the United States has benefited greatly from the EB-5 Program.

Conference participants discussed the achievements of the program at length, from its founding through 2016, as well as the main challenges it will encounter this year and beyond, especially the imminent risk of its permanent termination. Several panels attended by speakers familiar with the program met during the conference.

The main issues addressed were the evolution of capital for EB-5, how to raise EB-5 funds, legislative reforms in 2017 and raising value for investors in EB-5. At the conclusion, Rodriguez spoke about the importance of the effort to the United States and the likely directions the program will take under the Trump-led government.

Figures presented show the full maturation of the program over its 20-plus years of existence. During the past 10 years, it has raised more than $15 billion and has generated some 300,000 full-time jobs. In the last year, the number of permanent green card applications increased 25% as a result of the program. There was a slight drop, 1.5%, in the number of initial petitions of EB-5 investors, from 14,373 applications in 2015 to 14,147 in 2016. However, the level remains historically high since the program had never reached such a volume, with just under 11,000 applications in 2014.

The number of regional centers (the entity responsible for hosting and supporting EB-5 projects) also increased considerably, with a 12% hike in 2016 compared to the previous year, reaching 1,246 currently active centers. The regions with the largest number of locations remain the states of California with 219, New York with 97, Florida with 82, Texas with 73 and Washington with 56. Together, those five states house more than 40% of regional centers currently in operation.

The structuring of projects and composition of share capital also present new trends in the EB-5 Program. In 2016, the volume of non-real estate projects reached 14%, a relevant milestone, which shows a tendency for investors to put their money on opportunities in sectors such as technology and retail instead of traditional real estate development.

In addition to being bolder, EB-5 investors are also more demanding. The capital composition traditionally used in the program in the 2000s was on average 48% of third-party loans, 31% of EB-5 capital and 21% of the entrepreneur’s contribution. This composition has changed in recent years, including lower funding from EB-5 (22%) and less third-party loans (31%).

Equity investment in projects is a new trend, not only for the entrepreneur, who has remained at 21%, but also for investors at risk, who now account for 26% of the average capital stock composition in EB-5 projects.

In the real estate sector, a major source of funds, hotels, captured an impressive 31% of the 2016 volume. However, multifamily complexes, such as apartments and condominiums took first place on the roster in 2016, growing from a representation of 21% to 36%. Third place went to corporate and mixed enterprises, which represented 15% of the tally.

Such growth and global support for the program have created a bottleneck in the processing of petitions by the immigration agency. The number of pending green card applications reached 6,309 in 2016, a record high, up 14% from 2015. Since about 1,800 applications can be processed in a year, the pending queue would need three years to clear – and that would only happen with no new requests being added.

Since the number of new orders was 3,474, it is easy to see that such a number will only escalate if there is no increase in USCIS processing capacity. The number of pending petitions currently sits at 20,804, an increase of 7%. Although it does not represent a record, it reached nearly 22,000 applications in 2015.

The same worries occur with initial requests for visas. Processing capacity is slightly less than 9,500 applications per year, but the receipt of new orders exceeds 14,000 a year. If this rate continues as it is, additional funding for processing will be required just for sustainability.

Despite impressive numbers, the continuation of the program is still in doubt. Founded for a temporary purpose in 1990, maintaining the EB-5 program on a permanent basis is being discussed constantly among the nation’s political leaders.

In December 2016, the US House and Senate passed a resolution postponing until April 28, 2017 the current program conditions, with capital from $500,000 directly invested in an EB-5 project. At the program’s current processing level, it’s impossible to get a green card in less than two years.

The main points under discussion, in addition to the continuation of the program itself, are the investment values, the rules for definitions of areas lacking employment (in which the minimum investment is lower) and the conformities to be adopted by the regional centers. The most current proposal involves increasing the minimum investment from the present $500,000 level to $1.3 million. This will keep up with the inflation rate of the period as well as better define areas where more clarity and objectivity are needed.

In addition, the Regional Centers will have rules of transparency and disclosure of information to follow as well as possible penalties for investment and participation in poorly reasoned projects.

On several occasions, Rodríguez has asked representatives of the industry to provide important information with which he can fight for the extension of EB-5. Although he is no longer involved in the presidential administration, he says President Trump knows the program well because he is benefiting from EB-5 capital for his own projects and believes in its continuation. He also points out that the absence of political objections related to the idea of continuing the program is a good indicator.

In his view, the new changes will be voted on April 28 and a new extension will most likely happen.

Finally, the former director stressed that once the Trump administration has demonstrated its ability to make rapid decisions, the climate of uncertainty will continue until an official position on the issue is agreed upon.

Those who are in the final stages of investing or developing projects related to the EB-5 should do so by the end of April to ensure that current conditions are maintained so negative feedback on the new rules is less likely to happen.