EB-5 Visa program still up in the air 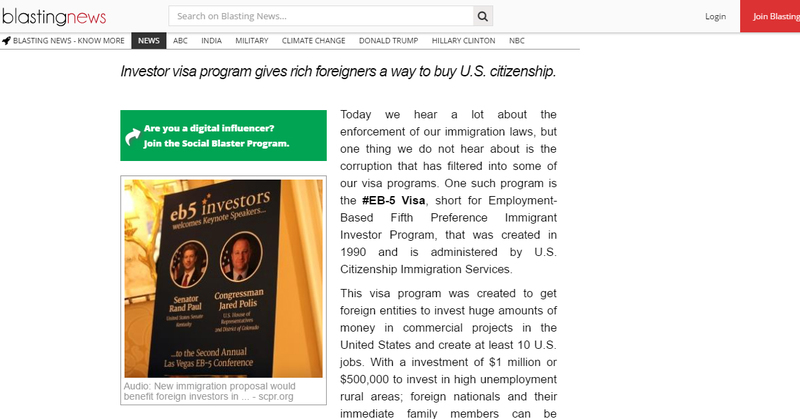 Today we hear a lot about the enforcement of our immigration laws, but one thing we do not hear about is the corruption that has filtered into some of our visa programs. One such program is the #EB-5 Visa, short for Employment-Based Fifth Preference Immigrant Investor Program, that was created in 1990 and is administered by U.S. Citizenship Immigration Services.

This visa program was created to get foreign entities to invest huge amounts of money in commercial projects in the United States and create at least 10 U.S. jobs. With a investment of $1 million or $500,000 to invest in high unemployment rural areas; foreign nationals and their immediate family members can be granted a EB-5 Visa once approved by U.S. Citizenship and Immigration Services (USCIS). The visa allows them conditional permanent residency; after two years, they may apply for the conditions to be lifted and obtained a #green card.

Years of corruption and scandals

The green card program accounts for a little over 1 percent of new permanent immigration to the U.S. annually, more than $13 billion in investments and has created anywhere from 10,000 to 41,000 jobs for U.S. workers per year. Unfortunately the EB-5 Visa program has been infiltrated with corruption and scandals over the years.

There has been little regulation on how the program is promoted and many times it was found that developers misrepresented projects and misspent funds that were collected. In fact, in a 2015 congressional hearing, a former HSI official testified that the green card investor program was no stranger when it came to major fraud, ID fraud, bank and wire fraud, money laundering, soliciting schemes and other such crimes.

It was also found that the accounting records of program outcomes and any economic benefits where neither valid or reliable and that more times than not, investments avoided economically distressed areas.

Where it stands today

The EB-5 Visa program was extended under the Obama's administration on December 10, 2016, the program will expire on April 28, 2017. On January 13, 2017, a notice of proposed new regulations was put forth that included an increase on the standard minimum investment and an increase on the Targeted Employment Area (TEA) investment, a reclassification of how TEA are defined and not a five-year basis investment amounts are to be subject to inflation increases.

Right now it is unclear whether the program changes will be passed; as President Trump insisted no new regulations be adapted until his administration has time to review them. So as of right now the big question is whether the program will go through a much-needed reform or or will be let to expire on April 28. #foreign investors