Why Investor Immigrants Are Choosing Canada Over U.S. 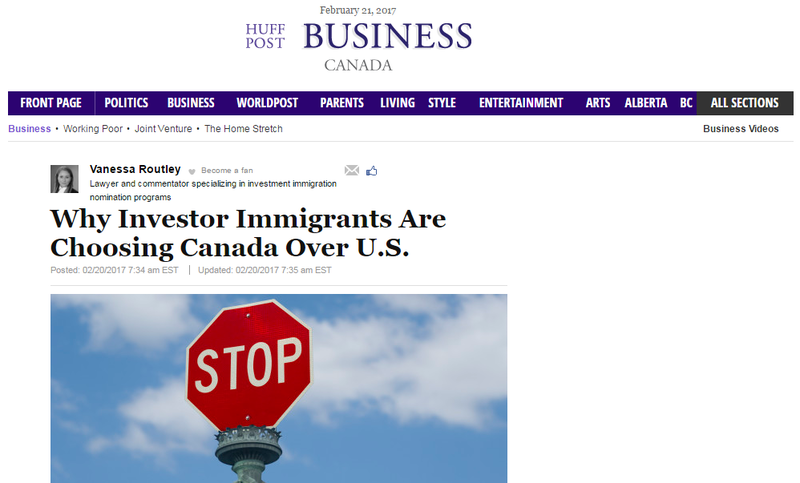 The price of a U.S. Green Card held steady for the past 27 years at $500,000 USD, under an investment immigration program known as EB-5. That will almost certainly change this year, when the U.S. Congress votes on raising the investor's Green Card minimum to $1.3 million. So what is a millionaire to do when the U.S. tells them to take their money elsewhere?

Apparently, they look to Canada, where immigrant investor programs are seeing a flood of interest and applications from discouraged would-be U.S. immigrants, seeking to take their money to more welcoming shores.

Qualified applicants flooded one such Canadian program in the province of Manitoba after the U.S. policy shift was announced in October. With investment minimums ranging from $115,000-$300,000 USD, the Canadian options are significantly cheaper than their southern counterparts as well.

Visas-for-dollars migration programs exist the world over, but no country can match the variety and affordability on offer in Canada. While Canada's infamous Federal Entrepreneur Investment Program was scrapped in 2014, to the dismay of 64,000 applicants who were shut out, there remain over a dozen smaller and less costly investor visa programs on offer.

From Vancouver to Nova Scotia, 12 entrepreneur immigration programs offer the ticket to Canadian Permanent Residence, our own version of the Green Card. These programs don't advertise, because they don't need to. Perhaps this absence of promotion is why many people don't know they exist. Investors clamoring for a safe haven for their family -- and their capital -- will find a range of options waiting north of the 48 parallel.

Unlike the U.S. EB-5 model which is based on a passive investment, the Canadian investor visa programs all require the immigrant actively manage his or her new business on a day-to-day basis. The provincial governments who administer these programs are acutely aware of the unpalatable concept of wealthy families buying their way into Canada, so these programs are all focused on hands-on ownership of small mom-and-pop businesses.

So how does a foreign entrepreneur go about setting up shop on the sunny Main Street in Vancouver, or a bustling avenue in Ottawa?

Typically, the potential immigrant conducts an "exploratory visit" to Canada, to evaluate the business environment. In places like Manitoba, Saskatchewan, this is a required step in the process. Applicants must commission a business plan, tailored to their intended small business idea. The provinces meticulously vet investors, carefully screening out those who cannot prove their (often very substantial) net worth was legally obtained.

Once the business plan and financial legitimacy of the applicant are approved, the immigrant and their family enter Canada on a temporary status and set up shop. Entrepreneurs are steered towards business projects which create jobs for Canadians, and the creation of jobs for Canadian citizens is a prerequisite for most programs. Once the immigrant verifies they have complied with the job-creation stipulation, they are eligible to apply for Permanent Residence for themselves and their immediate family.

By keeping these immigration programs small, local, and closely regulated, Canada has managed to avoid the spectre of widespread fraud and collapsed mega-projects which plagued their U.S. counterparts. Canada's provincial investor programs are quickly becoming the darlings of the global middle-class who seek to open a small business in a stable country. This trend will continue through 2017, with Canada once again attracting immigrants when the U.S. turns them away.