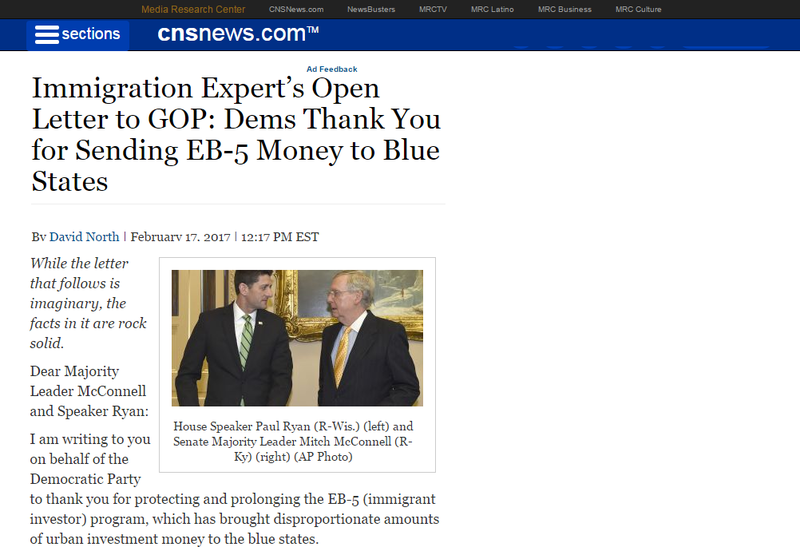 I am writing to you on behalf of the Democratic Party to thank you for protecting and prolonging the EB-5 (immigrant investor) program, which has brought disproportionate amounts of urban investment money to the blue states.

Your Olympian ability to overlook the fact that twice as much EB-5 money goes to blue, rather than red, states is admirable as you have presided over the continuing resolutions that have kept this extremely controversial program alive.

As you know, the program provides immigrant visas to people who could not otherwise obtain them; they are ruled eligible because they have bought their way into the country by sending half a million dollars into investments sanctioned by, but not guaranteed by, the Department of Homeland Security. You have, happily, ignored the purists who say that we should not sell visas to immigrate to the United States.

Before I spell out the numbers, let me thank you, too, for ignoring the stream of criticisms of this program, regarding all the scandals, all the money wasted when not stolen, and all the economic gerrymandering of the locations of the investments — you did this as you served the interests of already prosperous middlemen in the bluest of the blue states, California and New York.

The EB-5 data below, but not the election results, are based on a late Obama administration report by its Department of Commerce entitled "Estimating the Investment and Job Creation Impact of the EB-5 Program".

So the states with a substantial margin in the Electoral College get about one third of the funds.

The data, based on p. 25 of the report, does not reflect the distribution of small amounts of money in eight states, because reporting these amounts, according to DHS, would violate some corporate privacy concerns. The funds covered by the data relate to 17 states and the very, very blue District of Columbia. There were absolutely no EB-5 funds invested in 25 of the flyover states in those years.

I raise the last point — the total lack EB-5 involvement in half our states — because that fact underlines the generosity of the GOP leadership. Of the 66 senators from these EB-5-ignored states and the eight with small programs, a substantial majority, 39, are Republicans. You, Sen. McConnell, are among them, as Kentucky received no EB-5 funds in those years.

Another study of the distribution of EB-5 moneys in big projects showed that 39 percent of those moneys were spent on Manhattan Island, which has 0.5 percent of the nation's population and which voted nine to one against your candidate for president. But despite the geographical distribution of these funds, you have saved the EB-5 program time after time as the heart of the program has faced various sunsets, as it does again on April 28.

This is not a large program, as it constitutes only 1 or 2 percent of the annual additional foreign investment in the nation, and as your colleague, Sen. Grassley, has argued, it is scandal-ridden and provides worrisome national security dangers. You have, commendably, risen above these considerations.

Your continuing support of this much maligned program, in spite of the fact that it rarely does any GOP state much good, is deeply appreciated by all of us in the Democratic Party.