Travel ban leaves some foreigners worried about their $500,000 US investment 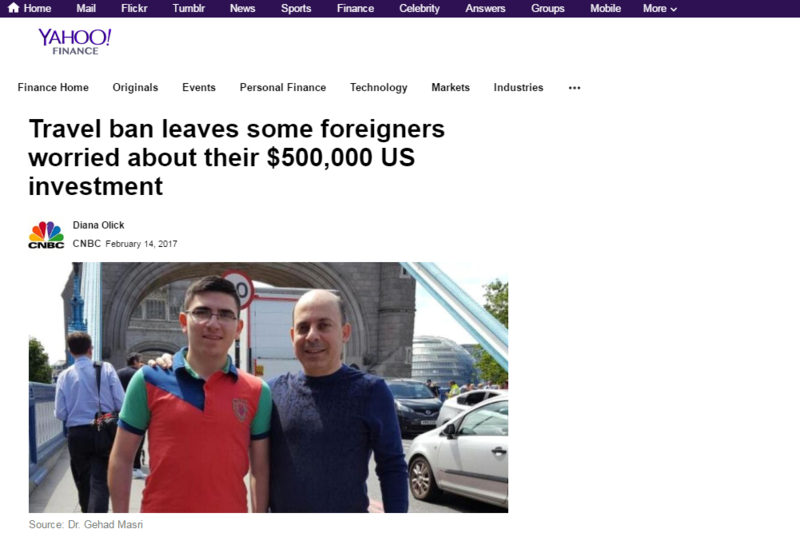 Dr. Gehad Masri wanted to help his eldest son fulfill the dream of becoming a doctor, just like him — and he was willing to spend half a million dollars to do it.

Masri applied for a popular U.S. employment program known as EB-5. It offers citizenship to foreigners in return for at least a $500,000 investment in a development or business that creates at least 10 jobs.

Masri paid the money, was accepted to the program, but is now on hold due to President Donald Trump 's executive order temporarily banning travel from seven mostly Muslim countries.

Masri has lived in Dubai for 20 years, but he, his wife and their three teenage children all have passports from Syria, one of the seven countries. Masri's son, Marwan, is a straight-A student and has already been accepted to two American universities. He was supposed to go on a school-sponsored trip to Boston to look at more colleges, but the trip was canceled when the executive order was signed.

"So we have fully planned and now really we are confused. We don't know what to do or what will happen next," Masri said in an interview from Dubai. "My son wants to be a good doctor, to add something to society, to help. It is his dream to do that, and I was helping him to do this dream by getting this green card and move the family there."

Masri is just one of dozens of applicants to the program whose future is uncertain. While the ban was deemed illegal by U.S. courts and is currently lifted, but the Trump administration has signaled that it is rewriting the order. Masri has no idea if he can get his money back if a new ban denies his visa.

"It's caused a lot of instability in the market, right, so a lot of people are very concerned about what is going to happen next in U.S. immigration, is it going to affect me? What is the next thing that he's going to put in place?" said Preeya Malik, an attorney who with her partner Shai Zamanian, work with Middle Eastern investors who want to apply for the program.

While the vast majority of EB-5 applicants are from China, Dubai is a popular hub for Middle Eastern investors in the program. The problem is that most residents of Dubai hold passports from other countries.

"Dubai is very popular for EB-5 because it's actually a culmination of many different people from many different nationalities," said Zamanian. "There is a lot of insecurity in understanding the current administration and their ability to rewrite executive orders so that perhaps it is more narrowly tailored."

Approvals for the EB-5 program jumped 65 percent from 2015 to 2016, according to the USCIS, the government agency that handles EB-5 applications. There are still more than 6,000 pending. The process can take up to a year and a half.

Since 2012, the EB-5 program has reportedly brought in an estimated $8.7 billion and created more than 35,000 jobs according to USCIS. Trump's son-in-law, Jared Kushner, used $50 million in EB-5 funding to develop a rental apartment complex in New Jersey named Trump Plaza. Most of the investors were Chinese.

With the future of the travel ban still uncertain, applicants to the EB-5 program are now rushing in, hoping to get approved before any new executive orders.

"I have clients that they are ready to sign my retainer agreement for the EB-5 program, and they're not sure whether they should or not," said Sally Amirghahari, an Iranian-born attorney in California who works with EB-5 applicants. "They are definitely concerned. They are wondering what is going to happen next, what kind of policy is going to be issued next. Would they ever have a chance?"

Amirghahari has one client who was getting ready to travel to the U.S. in April, but the visa was canceled and still pending re-approval.

"There is nothing worse than not knowing what's going to happen because people like to plan for their lives for their children for their future. That's why they invest, they get excited," she said.

Malik and Zamanian are also seeing a surge of applicants, worried that a new ban will prohibit their eligibility for the EB-5 program. As for Masri and his family, they are still waiting for their final immigration interview, which was delayed due to the ban.

"I felt bad, and I felt unfair. Why? What mistake we did? I cannot find explanation," said Masri. "I felt also like moving to the States, maybe it will not be a good step. It will not be secure for us anymore. Maybe in near future there is [an]other order that will come that will influence us, so it's mixed feelings actually."