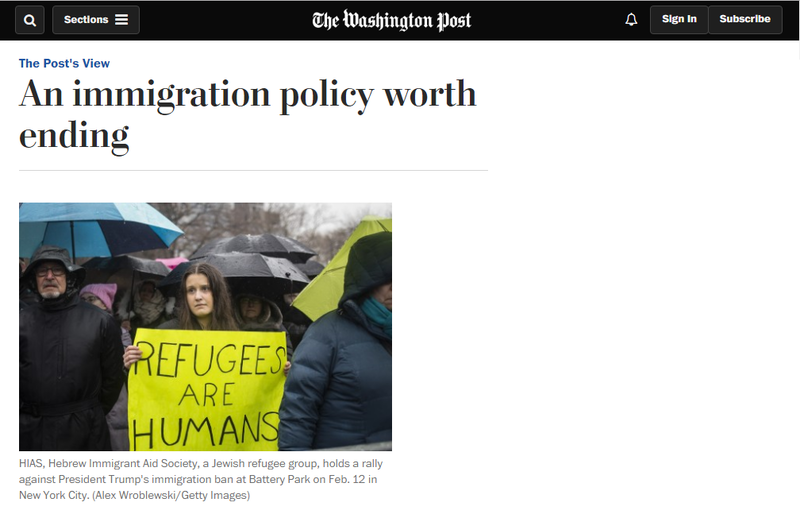 PRESIDENT TRUMP says he wants to tighten those aspects of our nation’s immigration laws that reward low-priority entrants or pose threats to national security. He also insists that his critics have no reason to worry that his family’s far-flung business interests will have an impact on his administration’s policies. Well, a bipartisan pair of senators has just given him a golden opportunity to prove his bona fides on both points.

We refer to a freshly introduced bill co-sponsored by Charles Grassley (R-Iowa), the chairman of the Senate Judiciary Committee, and Dianne Feinstein (Calif.), the committee’s ranking Democrat. Their proposal would abolish the EB-5 visa program, which began a quarter-century ago as a well-intentioned plan to attract international capital to the United States, but has morphed into a scandal-ridden embarrassment. The program awards permanent residency to a maximum of 10,000 foreigners per year who agree to pump at least $500,000 into a U.S. business, creating at least 10 jobs directly or indirectly. In September 2015, the Bipartisan Policy Center estimated that 44,000 people, a third of whom are foreign investors and the rest family members, had qualified for visas since the program began in 1992. A disproportionate number of those admitted recently come from communist China, whose nontransparent economy makes the origins of their wealth difficult to trace. A 2015 Government Accountability Office report found that the Department of Homeland Security lacked the capacity to vet EB-5 applicants from China and elsewhere adequately, let alone in the “extreme” manner now in vogue at the White House.

In return, the Bipartisan Policy Center report found, the U.S. economy got 77,150 full-time jobs and approximately $4.2 billion in investment — paltry results, given that the United States has a total labor force of 150 million and $200 billion in annual foreign investment. To be sure, EB-5 has created a lot of jobs for consultants, lawyers and lobbyists, who get paid to entice wealthy foreigners into applying for the visas, and to persuade Congress to renew it each year. Alas, some EB-5 promoters have bent or broken the rules, as shown by a string of scandals, including the April 2016 federal seizure of an EB-5-funded project in Vermont that government lawyers called “rampant with fraud.”

Even when the program functions honestly, its benefits skew heavily to big-city real estate developers, who use it to obtain financing more cheaply than they could from investors who were motivated by rate of return, not migration. Among the business owners to take advantage of EB-5 was Mr. Trump’s son-in-law and adviser, Jared Kushner, whose erstwhile company (he has now separated himself from it) raised $50 million for a Trump-branded apartment building in Jersey City from Chinese EB-5 applicants.

Getting strongly behind the Grassley-Feinstein bill would be a good way for Mr. Trump to show that his immigration policies reflect consistent principles, not his and his family’s involvement in the real estate business. The president has said he wants to be sure all new Americans come because they “love” the country. There are many ways to show that love, no doubt; but surely one of the least worthy of governmental favor is subsidizing hotels and apartments with one’s murkily obtained wealth.