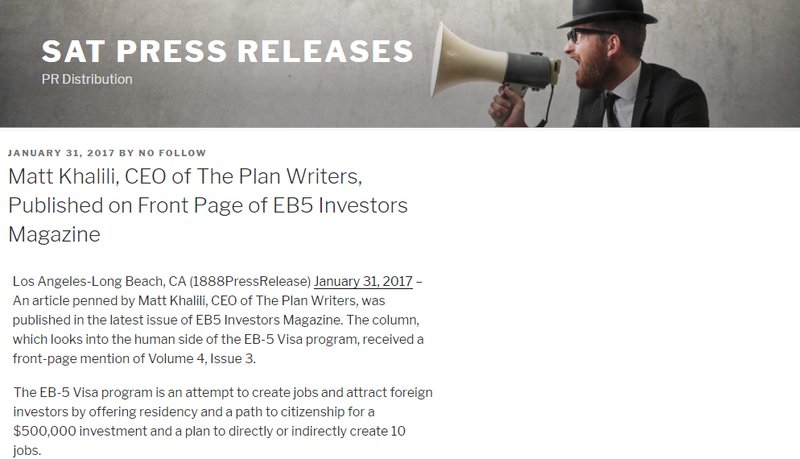 An article penned by Matt Khalili, CEO of The Plan Writers, was published in the latest issue of EB5 Investors Magazine. The column, which looks into the human side of the EB-5 Visa program, received a front-page mention of Volume 4, Issue 3.

The EB-5 Visa program is an attempt to create jobs and attract foreign investors by offering residency and a path to citizenship for a $500,000 investment and a plan to directly or indirectly create 10 jobs.

Khalili argues that immigration processes like the EB-5 frequently get bogged down in technical bureaucratic debates. As a result, the humanity of the people behind the applications is overlooked. Khalili shares the stories of some Chinese EB-5 applicants in an attempt to better understand them as human beings instead of as figures on a form.

One Chinese investor interviewed talked of her hope for her son to attend school in America, complaining that, in Chinese schools, students “learn to take tests but that is all. They do not learn to think critically and instead simply memorize a textbook.”

Still, another individual spoke of the effort it took to get the visa application approved, citing over 200 hours of personal work dedicated to the effort, along with hours of labor from lawyers and other professionals.

The accounts add up to a meaningful look at the real people going through the EB-5 application process. Applicants are hoping to come to America for more than just the money; they are looking for a chance at the American Dream.

“It was very insightful to sit down with some EB-5 applicants and hear their stories.” said Khalili. “Too often we get caught up in business plans, application forms, funding details, and other impersonal items. If we forget the people behind the paperwork, we can never design or run an effective immigration program, which should, after all, be about the people.”

The EB-5 program only recently received more applicants than visas, and the more arduous competition only serves to highlight the importance of keeping the human beings behind the applications at the forefront of our thoughts. In 2014 there were 10,000 visas available and 10,923 applications were submitted.

EB5 Investors Magazine caters to EB-5 professionals, discussing important issues and keeping readers up to date on the constantly changing laws and legislation governing the EB-5 visa. It is one of the pre-eminent publications focusing on business and immigration issues.