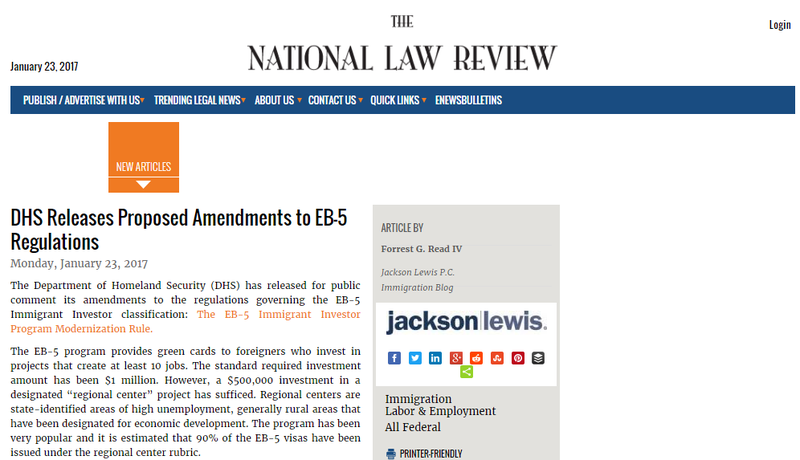 The EB-5 program provides green cards to foreigners who invest in projects that create at least 10 jobs. The standard required investment amount has been $1 million. However, a $500,000 investment in a designated “regional center” project has sufficed. Regional centers are state-identified areas of high unemployment, generally rural areas that have been designated for economic development. The program has been very popular and it is estimated that 90% of the EB-5 visas have been issued under the regional center rubric.

Of late, the regional center program has been highly scrutinized and received accompanying public attention. There have been complaints about gerrymandering the boundaries of the regional centers to patch together areas of high unemployment. In 2016, the Securities and Exchange Commission filed a criminal complaint against regional centers in Vermont, including two ski resorts that appeared to be Ponzi schemes. The resorts were seized and put into receivership, leaving some innocent investors vulnerable to deportation. There have been lobbying efforts to change the rules so that defrauded investors could obtain green cards.

The new rule would:

Allow foreign nationals to retain priority dates should their initial investment fail or stall while they are waiting for their date to become current;

Centralize with DHS the power to designate regional centers, thus removing that responsibility from the states.

Although this proposed rule was released for public comment prior to January 20, 2017, any further action on this rule will have to await review by the new Trump Administration.