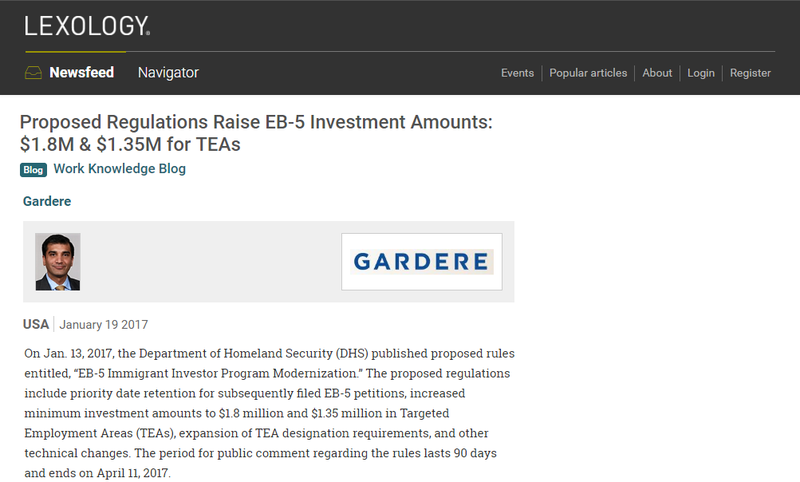 The first major change DHS has proposed is to allow petitioners to retain the priority date of approved EB-5 petitions for any subsequently filed EB-5 petition. This change will benefit the many EB-5 investors whose initial petitions were approved but later revoked through no fault of their own, for instance if the Regional Center terminated or an investment project becomes no longer desirable.

DHS likens the change to the priority date retention available to workers in the other employment based categories. It also did so to redress the unavailability of EB-5 visas due to over-subscription.

DHS also proposed that the minimum investment amount be adjusted every five years based on the CPI‑U. The calculation of five years would be start on the October 1 following the most recent increase. Under the rule, an increase would be expected on October 1, 2023.

Another major new requirement is that the investor be required to contribute the minimum investment amount at the time the initial petition is filed.

DHS proposed to eliminate state designation of high unemployment areas. Instead, DHS would be responsible for making TEA determinations.

DHS also proposed new standards for defining TEAs. The changes more closely mirror statutory requirements and provide clarifications. Population for a proposed rural area will be based on the most recent decennial census of the United States. Cities and towns with a population of 20,000 or more can be considered geographic areas for purposes of determining TEA. TEAs may consist of a census tract or contiguous census tracts in which the new commercial enterprise is principally doing business if the weighted average of the unemployment rate for the tract or tracts is at least 150 percent above the national average. An project tract may also be designated a TEA if any or all tracts directly adjacent comprise an area in which the weighted average of the unemployment rate for all of the included tracts is at least 150 percent of the national average.

A number of technical changes were reported. Some provided clarification and others updated regulations to reflect terminology used in statutory amendments. A few significant changes include: