Report: California is No 1 for most EB-5 investment 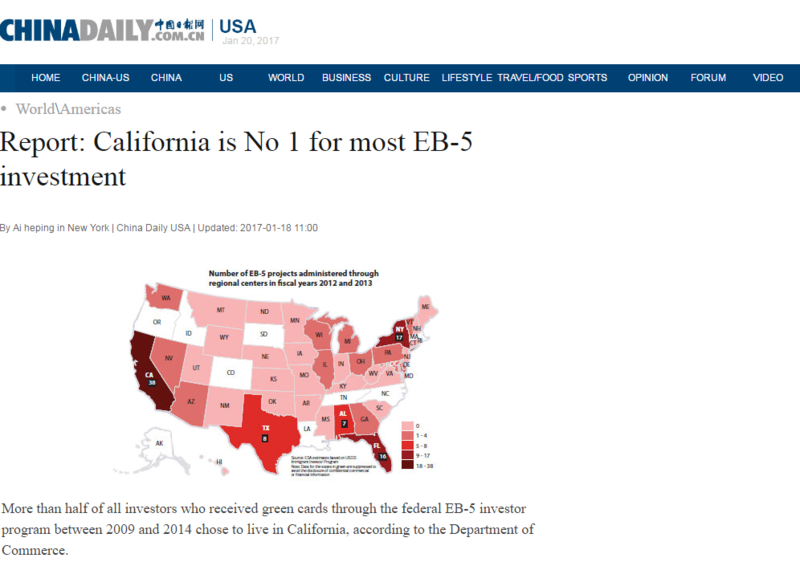 More than half of all investors who received green cards through the federal EB-5 investor program between 2009 and 2014 chose to live in California, according to the Department of Commerce.

Between 2009 and 2014, more than 8,000 EB-5 investors and their family members resided in the state, according to US Citizenship and Immigration Services data (USCIS), the report said. USCIS, part of the Department of Homeland Security (DHS), administers the EB-5 program that grants foreign investors green cards in exchange for a minimum investment of $500,000 in job-creating projects in the US.

The second-biggest EB-5 settlement area was New York, which had roughly 1,500 EB-5 residents during the same period. In addition to California and New York, the top five states where EB-5 investors and families resided were Florida, New Jersey and Washington.

California also surpassed New York and all other states on total EB-5 investment. Nearly $1.5 billion flowed through its regional centers into 38 projects between 2012 and 2013, while New York saw $1.2 billion in 17 projects, the report found. Chinese companies have invested heavily in downtown Los Angeles for new residential units in skyscrapers, with Greenland USA's Metropolis among the developments funded by EB-5.

By using EB-5 investment and job creation estimates over the two-year period of fiscal years 2012 and 2013, the report released on Jan 10 said there were 10,644 investors, total dollar value of investment was $16.4 billion and 169,759 jobs were expected from 134 projects in EB-5 regional centers.

"California attracts a lot of investment because of its size and population, and EB-5 is a job creation program after all," Gregory Karns, an attorney at Cox Castle & Nicholson who specializes in Asian investment, told The Real Deal in an article published on Jan 12. Investors can also expect larger returns in Los Angeles than in New York because the city has more favorable capitalization rates and underwriting terms, he said.

Karns said, however, that the flow of EB-5 money into Los Angeles may level off as investors turn to cities with lower cap rates. "I'm already seeing these investors looking at Portland, Austin, and around Boston," he said. "They're beginning to branch out. There's a learning curve, but the low cap rates will end up driving them outside of the three big choices: New York, San Francisco, and LA".

A major attraction of Los Angeles is that the majority of EB-5 investors are Chinese nationals and Los Angeles County has Chinese enclaves, such as Arcadia.

"For the Chinese, there's a lot of appeal in Beverly Hills and other tony locations like Bel Air and Holmby Hills," Nourmand of Beverly Hills-based brokerage Nourmand & Associates, told The Real Deal. He said that Chinese buyers are partial to new construction, and that they tend to stay within the $3 million to $12 million range.

Sally Forster Jones, president of John Aaroe Group's Beverly Hills office, said, "At the moment, the number of my Chinese clients is a fraction of what it used to be."