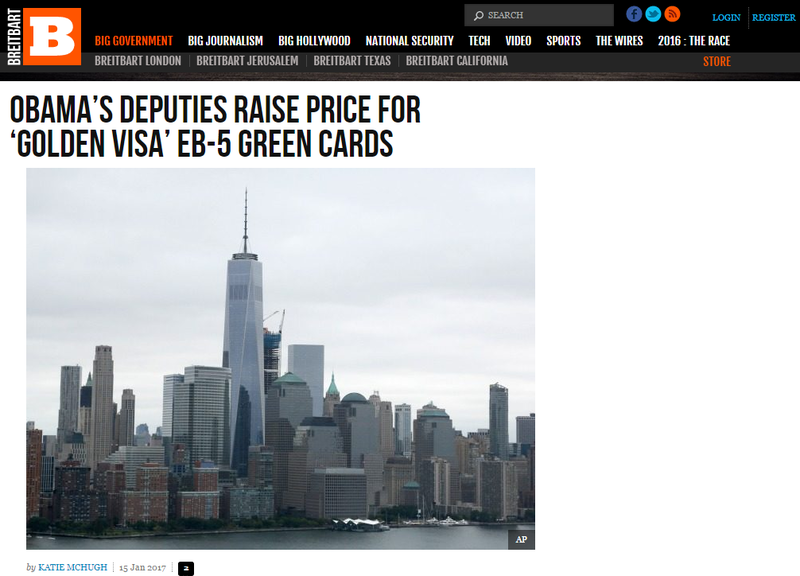 The outgoing Obama administration has raised the upfront investment required to get citizenship via the fraud-wracked EB-5 visa program from $500,000 to $1.35 million.

The entire EB-5 program should be abolished, but the price hike is an excellent improvement, says David North of the non-partisan Center for Immigration Studies, which seeks to reduce the annual inflow of immigrants and contract-workers.

Immigration lawyers sometimes refer to the EB-5 program as a “Golden Visa” because it allows them rich, foreign-born investors into the U.S., and eventually gain permanent residency and citizenship for themselves and their families. All that is requires is for would-be migrants to promise to invest $500,000 — now $1.35 million — in a commercial deal approved by the Department of Homeland Security.

If done carefully, that investment can be recouped from rents or a subsequent sale — meaning wealthy foreigners can buy citizenship for themselves and their family by merely lending money to American companies for a few years.

The program has been dubbed “China’s favorite U.S. visa program,” because it is mainly used by wealthy Chinese seeking the legal security provided by U.S. citizenship. In 2014, Chinese investors snapped up 85.4 percent of roughly 10,000 EB-5 visas, according to government data.

Those incentives have created a mini-industry of immigration lawyers and real-estate firms which effectively sell U.S. citizenship to fund their own construction of resorts, office parks and other commercial sites.

Numerous critics have called for the EB-5 program to be cancelled or reformed, for example, by ensuring investors’ money goes into low-income zones.

One advantage of Obama’s regulatory change is that it “will probably tilt the distribution of these [foreign] funds away from already prosperous areas into more depressed ones,” where the investments are supposed to go, North said.

The regulations say that investment are intended to be directed to areas with a high unemployment area. But, typically, lawyers gerrymander the supposed “Targeted Employment Areas” to ensure the real-estate investment is put into prime real estate.

“Given that some 40 percent of the incoming EB-5 funds are coming to Manhattan, let’s use a Broadway metaphor here. If the show is booked solid for years in advance, as the EB-5 program is, why not raise the ticket price?” North asked in another proposal to reform the program. “[W]hy not use the EB-5 program to benefit all of us, rather than focus on giving money, as it primarily does now, to a small circle of already prosperous New Yorkers?”

Prominent politicians also intervene in the approval process to fast-track visas for wealthy investors who promised to pour cash into the donors’ real-estate projects.

“The EB-5 regional center program has been plagued by fraud and abuse,” said Iowa Republican Sen. Chuck Grassley, according to the Washington Times. “It poses significant national security risks. There are serious allegations that the program may be facilitating terrorist travel, economic espionage, money laundering and investment fraud.” Retired Oklahoma Republican Sen. Tom Coburn stated that it was “unclear whether any economic benefit of the program justifies the criminal and national security risks” after his staff could not get concrete, truthful numbers on EB-5 “job creation.”

As Breitbart News has previously reported, there is virtually no verification of the investors’ promised investment. Ambitious and wealthy foreigners plus non-existent enforcement naturally leads to more than a few criminal escapades. Some EB-5 visa holders set up schemes to defraud investors and blow millions on luxury goods and homes in the U.S., leaving nothing but vacant lots bought with foreign cash.

“In August 2015, the GAO released a report spotlighting the program’s persistent failure to collect and maintain basic electronic data on EB-5 participants (including their names and birthdates!), as well as the pathetic state of its job creation estimates,” Malkin writes. “Its ‘methodology for reporting program outcomes and overall economic benefits is not valid and reliable because it may understate or overstate program benefits,’ the GAO found. In other words: totally worthless.”

“If the feds can’t be trusted to invest government subsidies wisely in American companies, how can they possibly determine which over-seas investors will be successful here?” she added.

The incoming administration will help determine whether or not the program will be reformed or scrapped entirely, or whether the new regulations will be scrapped or preserved.

In December, the Republican-controlled Congress extended the EB-5 visa program without implementing any reforms.