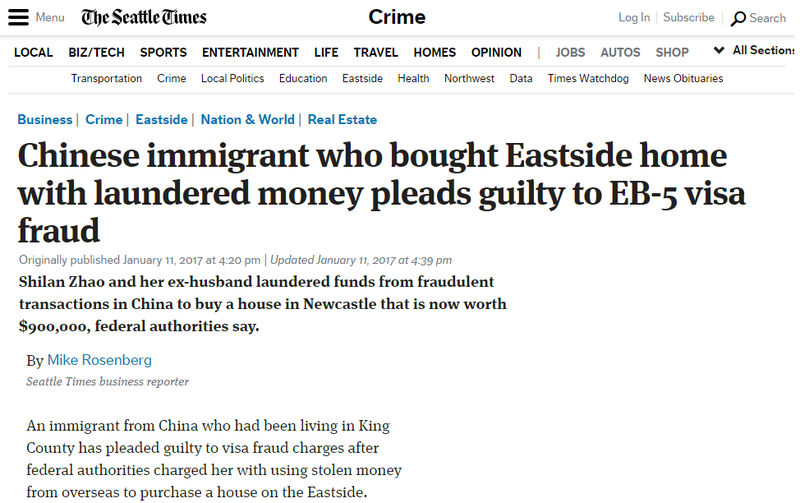 An immigrant from China who had been living in King County has pleaded guilty to visa fraud charges after federal authorities charged her with using stolen money from overseas to purchase a house on the Eastside.

Shilan Zhao, 53, submitted false documents to federal immigration authorities and will forfeit her $900,000 house in Newcastle and give up properties worth tens of millions of dollars in California and New York, the U.S. Attorney’s Office in Los Angeles said. She also will spend up to five years in federal prison.

The federal government allows people living overseas to obtain green cards for themselves and their families if they invest at least $500,000 in job-creating ventures in the United States under the EB-5 program. Zhao and a man she said was her husband came to the United States in 2009 with a conditional green card obtained through the program after claiming she was getting investment money from two Chinese flour companies she said she partly owned.

But an indictment of Zhao, unsealed in March 2015, says she lied about the source of the investment and that she had already been divorced from the man for years.

The indictment says she used funds from fraudulent transactions from a grain storehouse in China to buy a four-bedroom house on 113th Avenue SE in Newcastle for $525,000 in 2012. Her ex-husband, 53-year-old former Chinese government official Jianjun Qiao, was a director at the grain business in Zhoukou.

Zhao lived in Newcastle but also owned a condo in Flushing, N.Y. and several properties in Southern California, the U.S. Attorney’s Office said. The Monterey Park, Calif. properties have a combined value of $28 million, according to the Los Angeles Times.

Under a deal with federal authorities, Zhao pleaded guilty in U.S. District Court in Los Angeles on Monday to one count of conspiracy to commit immigration fraud. She faces sentencing in November and the charge carries a maximum sentence of five years in prison.

As part of the agreement, she will forfeit all her real estate, including the house in Newcastle, which Zillow estimates is now worth $909,000. It’s unclear if she’ll face any fines.

Qiao, meanwhile, remains on the lam.

“There is a lawful process that can be followed to obtain legal status in this nation. Those who attempt to undermine the system by fraud threaten our national security and compromise the attempts of other immigrants who follow the rules to lawfully gain entry to the United States,” Eileen Decker, U.S. Attorney for the Central District of California, said in a statement.

Zhao’s attorney, Kirk Davis, did not respond to a message seeking comment.

Chinese authorities helped the IRS and U.S. Immigration and Customs Enforcement on the case, the Department of Justice said.

While this specific type of prosecution is rare, there has been no shortage of problems with the EB-5 immigration program, both locally and around the country. Just last week, local developer Lobsang Dargey pleaded guilty after defrauding hundreds of EB-5 investors from China.

In June, another Seattle developer, Henry Liebman, was fined $1.24 million for improperly using unlicensed brokers to steer EB-5 investors his way. And in April, a Bellevue immigration attorney was fined $278,000 in a similar EB-5 case.

Washington is home to the fifth-most EB-5 investors from overseas, with more than 800 investors and family members living in the state, according to a new federal report.