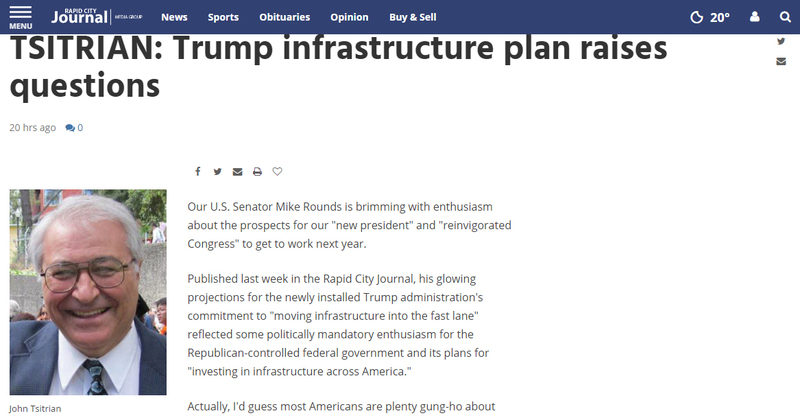 Our U.S. Senator Mike Rounds is brimming with enthusiasm about the prospects for our "new president" and "reinvigorated Congress" to get to work next year.

Published last week in the Rapid City Journal, his glowing projections for the newly installed Trump administration's commitment to "moving infrastructure into the fast lane" reflected some politically mandatory enthusiasm for the Republican-controlled federal government and its plans for "investing in infrastructure across America."

Actually, I'd guess most Americans are plenty gung-ho about infrastructure investment, though Trump's proposal to make private financing the cornerstone of the plan should raise a few questions.

Rounds himself stood by while one of the largest public-private projects he endorsed during his administration as South Dakota's governor a few years back, the failed beef plant in Aberdeen, blew up into the EB-5 scandal. That fiasco directly cost South Dakota $2 to $3 million, probably more when you add in lost local and state taxes that bankrupt investors didn't pay. If that venture didn't make Rounds a bit more circumspect about his unabashed enthusiasm for Trump's public-private concept, the rest of us should be paying attention.

An analysis of the Trump plan by the conservative free-market thinkers at the American Action Forum uses words like "fantasy on steroids ... nonsense ... there is no infrastructure Genie" to lambaste Trump's supposedly revenue-neutral plan for providing investors with tax breaks that will be offset by taxes on wages of new construction workers, along with corporate profits earned by builders and contractors.